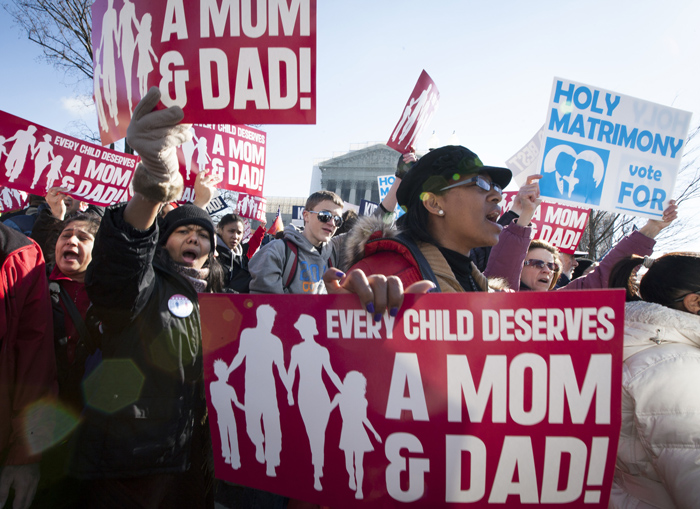 People demonstrate outside the Supreme Court building in Washington in this photo from late March, 2013, when the court heard oral arguments in two same-sex marriage cases.

The court, in separate 5-4 rulings struck down the federal Defense of Marriage Act, or DOMA, defining marriage as between one man and one woman and also refused to rule on the merits of a challenge to California’s Proposition 8, the voter-approved initiative barring same-sex marriage.

In the rulings, the court said DOMA was unconstitutional under the Equal Protection Clause and they sent back to lower courts a challenge to Prop 8, saying the individuals who defended the law in court lacked the legal standing to do so.

Archbishop Charles Chaput said in a statement June 26 that “in striking down Sec. 3 of the federal Defense of Marriage Act (DOMA) in United States v. Windsor, the Court leaves intact – at least for now — state constitutional definitions of marriage as an institution restricted to one man and one woman. As Justice Samuel Alito points out in his dissent, no federal ‘right’ to same-sex marriage exists. The Constitution simply does not establish one.”

“As Catholics,” said the archbishop, “we believe marriage needs to be strengthened, not redefined. It is a great gift to men, women, children and society. Affirming the true definition of marriage denies no one his or her basic rights. On the contrary, protecting marriage affirms the equal dignity of women and men and safeguards the basic rights of children.

“Same-sex unions, whatever legal form they take, cannot create new life. They cannot duplicate the love of a man and woman. But they do copy marriage and family, and in the process, they compete with and diminish the uniquely important status of both. The legal battle about marriage will continue. And the Church’s commitment to promote the authentic meaning of marriage and family will be vigorously pursued,” Archbishop Chaput said.

A statement by Cardinal Timothy M. Dolan of New York, president of the U.S. Conference of Catholic Bishops, and Archbishop Salvatore J. Cordileone of San Francisco, chair of the U.S. bishops’ Subcommittee for the Promotion and Defense of Marriage, said the court “has dealt a profound injustice to the American people by striking down in part the federal Defense of Marriage Act.”

“The court got it wrong,” they continued. “The federal government ought to respect the truth that marriage is the union of one man and one woman, even where states fail to do so. The preservation of liberty and justice requires that all laws, federal and state, respect the truth, including the truth about marriage.”

The bishops also said it was “unfortunate that the court did not take the opportunity to uphold California’s Proposition 8 but instead decided not to rule on the matter. The common good of all, especially our children, depends upon a society that strives to uphold the truth of marriage. Now is the time to redouble our efforts in witness to this truth.”

They urged people to “stand steadfastly together in promoting and defending the unique meaning of marriage: one man, one woman, for life.” They also asked for prayers “as the court’s decisions are reviewed and their implications further clarified.”

Baltimore Archbishop William E. Lori said the court’s decisions were the “latest in a troubling trend of decisions by lawmakers, judges, and some voters which ignores the fundamental truth about marriage: It is the most valued, most important social unit in our society and as such is deserving of the protection and special recognition societies have afforded it throughout human history.”

He said the courts’ decisions will “also undoubtedly contribute to concerted efforts not just to redefine marriage but to dismantle it, efforts which represent a serious threat to religious liberty and conscience rights for countless people of faith.”

Archbishop Timothy M. Broglio of the U.S. Archdiocese for the Military Services said that although the Supreme Court “avoided a firm declaration about same sex-marriage, it signaled that attempts by the federal government to limit rights available under state law could be unconstitutional.”

He said the court shifted the debated to the states which “raises questions about the scope of the federal government’s authority to administer its own programs.”

In light of the court’s decisions, the archbishop said it “seems imperative to remind the faithful of the Archdiocese for the Military Services that they must never forget that all, regardless of their sexual inclination, must be treated with the respect worthy of their human dignity.”

The bishop urged Catholics to “make their voices heard through the democratic process by upholding marriage in their home states,” saying he remains confident that Americans will “continue to promote and defend the good and the truth of marriage as the union of one man and one woman as husband and wife for life.

Marriage remains what it has always been, regardless of what any government might say,” he added.

NEXT: Listening with heart gives one courage to tell truth of faith, nun says