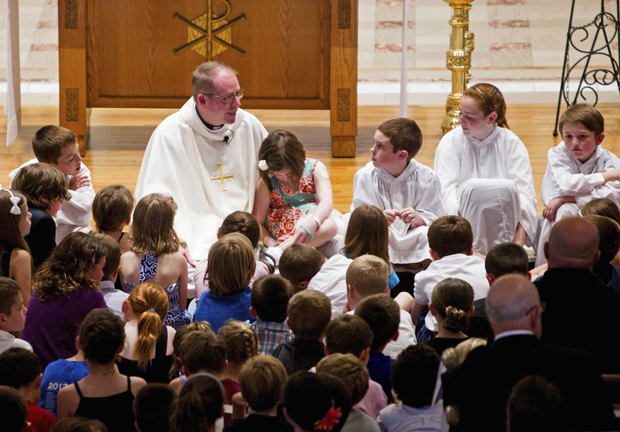 DORCHESTER, Mass. (CNS) — A June 9 Mass at St. Ann Church in Dorchester celebrated the life of Martin Richard, the boy who was killed in the Boston Marathon bombings and who would have turned 9 the day of the Mass.

At the request of the Richard family, reporters were asked to stay in a designated area across the street during the Mass. Bill Forry, family friend and managing editor for the weekly Dorchester Reporter community newspaper filed a pool report.

According to his report, Martin’s father spoke for more than 10 minutes about his son near a poster-size portrait of him.

Richard described his son as an outstanding and curious student who loved astronomy, math and solving complex problems. He said his son also was a gifted athlete who participated in soccer, baseball, street hockey and flag football leagues. Even in inclement weather, he said, Martin would rather play basketball outside than watch television. 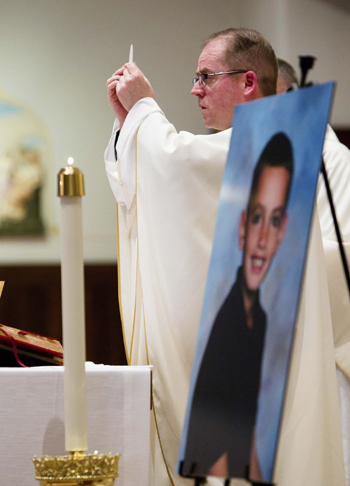 Father Sean O’Connor, pastor of St. Ann, invited children to sit with him on the step in front of the altar for his homily, which is his usual custom. He asked the group of about 100 children if they knew what hope is.

“You teach your moms and dads to laugh and to love and that makes hope real for us,” Father O’Connor told them.

He also urged them to pray the rosary with their parents to ease the pain of Martin’s loss.

Jane Richard, Martin’s sister, sat next to the priest. The girl, who has been a step dancer since she was 4, received a standing ovation as she pushed her wheelchair up the church’s center aisle.

Father O’Connor told the congregation that her first words to him when he visited her bedside at Children’s Hospital were: “Where have you been? You have to pray.”

He said they prayed for the nurses, doctors, first responders and for Martin, whom Jane described as someone who “lives in my heart.”

The congregation applauded when the priest said Jane received first Communion while she was hospitalized, a year ahead of schedule.

After Mass, the Richard family greeted friends and fellow parishioners at the adjacent school, Pope John Paul II Catholic Academy. A long line stretched around the gym, down the school’s main hallway and out onto the sidewalk.

Martin Richard was buried following a private service the week after his death.

NEXT: Theologians give Pope Francis thumbs up for ‘good pastoral directions’