Theologians give Pope Francis thumbs up for ‘good pastoral directions’ 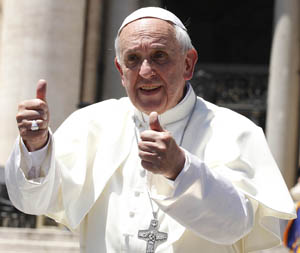 MIAMI (CNS) — The new papacy of Francis has thus far been inspiring, challenging and accessible and is giving “new traction” to Catholic social teachings, according to a cross section of distinguished scholars on hand for a convention of theologians.

Members and guest presenters of the Catholic Theological Society of America met June 6-9 in Miami for their 68th annual convention, where they explored the conference theme of “conversion” during workshops and keynote speeches.

Several members of the organization and presenters gave their personal opinions about the early papacy of Jorge Mario Bergoglio and his impact on the church just a month or so before his first trip abroad as Pope Francis for the 2013 World Youth Day in Brazil.

The idea of a Latin American who entered into the office of the papacy by saying essentially, “I am a bishop, you are a people and we are on a journey together,” set a welcoming and necessary tone given all the challenges facing the church,” said Peter Casarella.

A professor of Catholic studies at DePaul University in Chicago, Casarella is also director of the university’s Center for World Catholicism and Intercultural Theology.

“It is now becoming clearer that Pope Frances was educated by many sources (in South America) who introduced him to a ‘theology of the people,’ which he already articulated before becoming pope and which he seems to be articulating now as a bridge between the preferential option for the poor and popular religion, Marian devotions, the faith of the people,” Casarella said.

“This may have some repercussions in terms of where he is going to bring the church in the future, certainly in terms of the visit to Rio de Janeiro and also for the global church.”

John E. Thiel, professor of religious studies at Fairfield University in Connecticut and CTSA’s president 2011-12, noted the church is at an interesting moment in history given that Popes John Paul II and Benedict XVI were arguably the most accomplished theologians in the papal tradition in recent centuries.

“The previous pope was probably the greatest pope-theologian, but this pope is not a professional theologian. Very few bishops write theology — their efforts are pastoral and they have a different kind of theological commitment that is practical,” Thiel said.

“We don’t know what the pope’s theology is and certain he doesn’t have a written, express theology that we can turn to and read,” Thiel said, “So we have to see how he has acted, and he has chosen some interesting, symbolic gestures to begin his papacy which I think are inspiring.”

The pope’s choice of name and his attention to issues of poverty show “good pastoral directions that raise a certain kind of conscientiousness important for all of us Catholics. Any time there is a new pope people are excited about that and it is an opportunity for energy and new leadership,” Thiel said.

Linda Hogan, a vice provost and professor of ecumenics at Trinity College Dublin in Ireland, said she finds the Pope Francis’ tone, practices of poverty and mode of engagement exciting, along with the way in which he presents himself and his concerns for the church.

“It is both challenging and gentle, a tone really embodying a leadership that comes from witnessing and it is more about showing the way than talking about the way — that will have a resonance with people around the world,” Hogan said, adding that even the scandal-weary Irish public have warmed up to the new papacy.

The previous two papacies, she added, already embedded a commitment to social justice, equality and fairness, “But what this pope is doing is saying, ‘This is the way I have lived throughout my life and this is the way in which this papacy acts and speaks in the world.'”

Tobias Winright, a professor of theology at of St. Louis University and editor of the Journal of the Society of Christian Ethics, points to an enthusiasm for the new pope visible worldwide and also closer to home among students, who seem to respond to the pope’s daily gestures and to his emphasis on economic justice, the environment, and critique of war, according to Winright.

“There seems to be an excitement and hope for the future that I haven’t seen for a long time,” Winright said. “A lot of what he is saying is very compatible with the courses I teach and the things I write — I think he may take the Catholic positions on those things to a whole new level and give them a new traction among Catholics.”

Winright added. “He is a simple, humble, humorous man who seems to have empathy.”

Catherine Challier, a French scholar of Jewish philosophy and ethics Universite Paris Ouest Nanterre La Defense, is hoping that Pope Francis will bring new interest and awareness of interfaith relations, which she fears is losing momentum as the World War II generation passes.

“In France, the reception is positive and Jews are quite happy (about Pope Francis), expecting the relationships between Christians and Jews will improve but the question is among young people in Europe,” she said.

The CTSA is the principal association of Catholic theologians in North America and the largest professional society of theologians in the world. This year’s convention drew more than 400 participants, including several representatives of the International Network for Societies of Catholic Theology.

NEXT: Hope for those ‘living in shadows’ seen in immigration reform debate