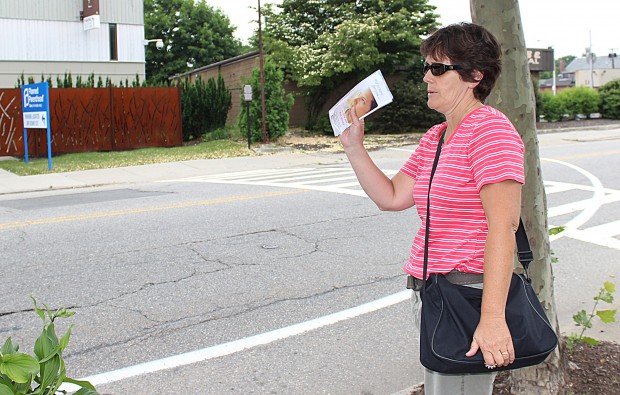 Sidewalk counselor Nancy Clark stands across the street from the Planned Parenthood League of Massachusetts building in Worcester, Mass., June 27, watching for people heading to the clinic, where abortions are performed. (CNS photo/Tonya Connor, The Catholic Free Press)

WORCESTER, Mass. (CNS) — Two Worcester sidewalk counselors are among seven plaintiffs in the “buffer zone” lawsuit the U.S. Supreme Court agreed to hear during its next term.

The court announced June 24 that it accepted the case, which challenges lower court rulings that the Massachusetts “buffer zone” law is constitutional.

That law prohibits most people, including those offering alternatives to abortion, from going closer than 35 feet to entrances, exits and driveways of abortion facilities, said Michael J. DePrimo, one of the plaintiffs’ attorneys. Zone lines encompass parts of streets and sidewalks.

The law exempts people entering the clinics, clinic agents — such as those escorting clients – as well as clinic employees, and other people such as police officers and firefighters, DePrimo said.

Others may walk through the zones if their sole purpose is to get to the other side, he said. But he said other activities, like waiting for a bus or taking news photos, are not permitted.

DePrimo said he expects the court, which starts its next term in October, to hear oral arguments in the case in December or January, and rule on it next spring.

He said he thinks the court will declare the entire buffer zone law unconstitutional, but the Massachusetts Legislature could try to craft another law that would comply with the ruling.

“I’m hoping and praying this case will change the law, because it would make a huge difference in saving babies,” said Nancy Clark, a wife and mother from Our Lady of the Angels Parish in Worcester.

She does sidewalk counseling outside Planned Parenthood League of Massachusetts in Worcester, where abortions are performed.

With a change in law, “I wouldn’t have to yell,” she told The Catholic Free Press, newspaper of the Worcester Diocese. When yelling to get clinic clients’ attention from a distance “you look like a fanatic” and “they may not hear what we are saying,” she said.

Sidewalk counselor, Mark Bashour, of Our Lady of Perpetual Help, the Melkite Catholic parish in Worcester, said he became a plaintiff “for closer access as pro-life counselors.”

Even those not against abortion should see that the law is unconstitutional and dangerous, he said.

“It’s not a very healthy precedent,” he said. “What happens when the government doesn’t like what you’re doing with your freedom of speech? What are they going to do next if this is found constitutional?

“My big goal is one day abortion will be found unconstitutional,” he said, adding that he hopes people will realize the unborn are living human beings who should have rights like everyone else.

“This is a First Amendment right,” said lead plaintiff Eleanor McCullen, of St. Ignatius Parish at Boston College. “My feeling is, I should be able to speak to whomever I want, wherever I want. I shouldn’t be curtailed by this line, because I lose people. I’m not harassing. … I’m just a grandmother trying to offer help.”

DePrimo, whose practice is in Hamden, Conn., said he previously challenged a 20-foot fixed buffer zone adopted by the city of West Palm Beach, Fla. In 2006, the federal court ruled that that was law unconstitutional.

In 2007, the Massachusetts Legislature passed the current buffer zone law, and he offered to litigate it pro bono; he’s one of several attorneys doing so, he said. The others include Philip D. Moran and Mark L. Rienz.

Their main points are that the buffer zone law discriminates according to viewpoint, violates equal protection and third parties’ First Amendment rights and is not narrowly tailored, DePrimo said.

Viewpoint discrimination refers to allowing clinic employees to support abortion within the buffer zone, while prohibiting pro-lifers from opposing it there, he said. This also violates the constitutional right to equal protection by showing favoritism to certain classes of people, he said.

He said plaintiffs also argue that the law is substantially overbroad; it violates rights of third parties not there to support or oppose abortion, but simply to use the public space for other purposes.

Plaintiffs challenge the law for vagueness, because it allows people to pass through the zone if their sole purpose is to get to another destination, but is not clear what “solely” means, he said. He said an assistant attorney general admitted that this even prohibits people from wearing clothing promoting a sports team while walking through.