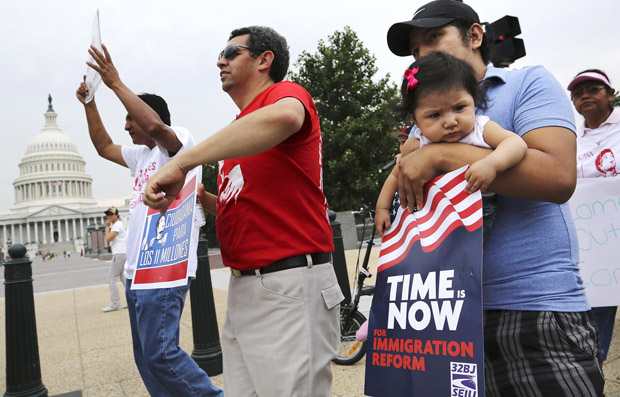 WASHINGTON (CNS) — The diverse coalition of faith, labor, business and civil rights activists who are trying to rework the nation’s immigration system celebrated the June 27 Senate passage of a massive reform bill.

The bill moves to the House, where Speaker John Boehner has said he would not allow it on the floor unless a majority of Republicans support it, which they do not. Instead, the House is taking a piecemeal approach, with separate bills focusing first on border security.

In a 68 to 32 vote, the Senate passed S. 744, the Border Security, Economic Competitiveness, and Immigration Modernization Act, which would massively ramp up enforcement on the southern border, adding 700 miles of fencing and doubling the number of Border Patrol agents, to the tune of $46.3 billion.

The bill also provides a path to legalization and ultimately citizenship for many of the estimated 11 million immigrants who reside in the United States without legal documentation. Other provisions would change the systems for family reunification and for farm labor immigration and temporary workers; give young adults a quicker path to citizenship under the DREAM Act; and address problems with employer verification, immigrant detention and where enforcement raids are conducted.

Vice President Joe Biden exercised his prerogative to preside over the late-afternoon vote, which was met by cheers of “yes, we can,” from the visitor gallery of the Senate chamber. The outbursts were quickly silenced, according to rules of Congress that prohibit any demonstrations.

Among those commending the Senate for completing the bill and for the bipartisan cooperation it took was Los Angeles Archbishop Jose H. Gomez, who urged the House of Representatives to do the same.

Archbishop Gomez, who chairs the Committee on Migration of the U.S. Conference of Catholic Bishops, said the bishops disagree with elements of the bill, particularly “the unprecedented buildup of enforcement resources along the southern border,” but they also “see the legislation as an overall improvement upon the status quo.”

Among changes to the legislation that the archbishop said the USCCB would seek as the House proceeds are making the path to citizenship “more accessible and achievable.”

Traveling in Africa, President Barack Obama in a statement thanked the bipartisan “gang of eight” senators who wrote the bill and those who crossed party lines to pass it.

He said that as a compromise measure, “nobody got everything they wanted. Not Democrats. Not Republicans. Not me. But the Senate bill is consistent with the key principles for common-sense reform that I — and many others — have repeatedly laid out.”

He called the bill’s border security plan of the bill the most aggressive in history. Its provisions also would provide an economic boost to the country, Obama said. He urged people who care about the issue to keep a watchful eye as the bill proceeds.

“Now is the time when opponents will try their hardest to pull this bipartisan effort apart so they can stop common-sense reform from becoming a reality,” the president’s statement said. “We cannot let that happen.”

Obama added that “the clear majority of Americans who support reform — from CEOs to labor leaders, law enforcement to clergy” should reach out to members of Congress and urge them to “pass common-sense reform so that our businesses and workers are all playing by the same rules and everyone who’s in this country is paying their fair share in taxes.”

Some groups working for comprehensive reform were blunt about what they consider the shortcomings of S. 744.

United We Dream, an organization of young adults who lack legal status because they were brought to the U.S. as children, issued a statement from coordinating committee member Evelyn Rivera, whose mother was deported six years ago after a traffic stop.

“We are deeply disappointed by the compromises that negotiators agreed to in order to secure additional Republican support for the bill,” Rivera said in the statement. “We know these deals will only add to the pain DREAMers and our parents have experienced from border militarization and record deportations.”

She lamented that “as the debate unfolded GOP leaders kept moving the goalposts, insisting on more and more wasteful and excessive border security measures and launching attacks on our families.”

“DREAMers are here to say to every single politician: We’re watching. No more. Enough is enough,” she said.

The Detention Watch Network said that although the bill includes some positive provisions related to detention, the inclusion of an amendment to “dramatically expand border militarization and unprecedented levels of enforcement” will “bring the shadow of militarization to America.”

It said some welcome reforms to detention provisions in the bill are overshadowed by “a vast expansion of enforcement that will lead to more immigrants being funneled into detention and processed for deportation” and will exclude people with criminal convictions from the legalization process and triple criminal prosecutions for border crossers.

Being in the country without permission is a civil offense not a criminal one, though repeat border crossers are increasingly prosecuted under criminal statutes, making it nearly impossible for them to ever immigrate legally.

As advocates gear up for the next part of the effort to get a bill approved and to the president to sign into law, some planned to start with prayer.

In Chicago, the archdiocese’s immigrant ministry program planned a Mass of thanksgiving for June 30 to recognize the bill’s passage. The archdiocese has collected 100,000 postcards to send Congress in support of immigration reform.

The Rev. Jim Wallis, president and CEO of Sojourners, said the principles of the Senate bill “are drawn from the heart of the Gospel welcoming ‘the stranger’ as Jesus commands, protecting families as Christians must do, respecting the rule of law as Christians are biblically asked to do, and fixing and healing a broken immigration system that has shattered the lives of 11 million people, whom the Bible tells us to defend and serve.”

Wallis said “the meaning of the Gospel in our times is at stake in this long-overdue effort to repair our corrupt and cruel immigration system. And the promise of an earned path to citizenship is in the best tradition of American democracy and diversity.”

Robert Gittelson, president of Conservatives for Comprehensive Immigration Reform, said for the faith community, particularly those in the coalition known as the Evangelical Immigration Table, the vote “was a serious step toward a moral and biblical solution, and we praise God for giving our senators the wisdom, leadership and compassion to pass this important bill.

“We also recognize that much hard work remains, and passing this bill in the House will prove to be challenging. America is built on a foundation of justice and compassion; we pray that the House passes immigration legislation that reflects these values.”

In Cincinnati, Tom Stieritz, director of Catholic Social Action for the Archdiocese of Cincinnati, said on behalf of Archbishop Dennis M. Schnurr that the bill, though imperfect, “is a step forward in finally establishing some law and order to our broken system and respecting the rights and family unity of migrants.”

“Echoing the position of our bishops, thousands of Catholics throughout the archdiocese have asked our senators to support such reforms. … By the end of this year, we hope to have an improved immigration system that restores order and promotes human dignity,” Stieritz said.