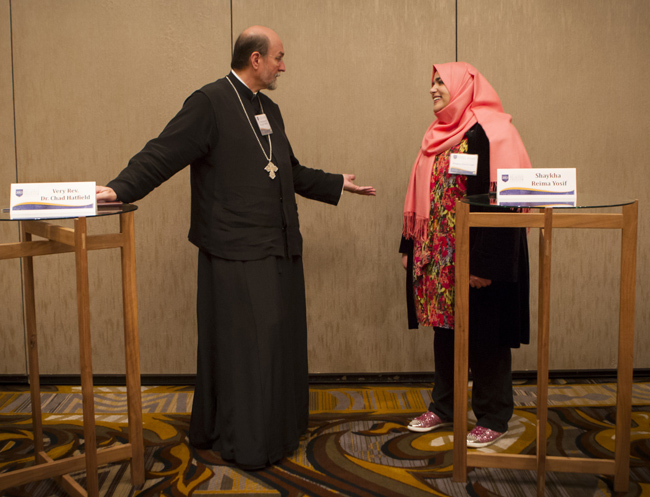 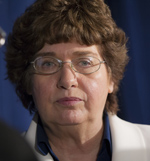 State Rep. Rebecca Hamilton of Oklahoma attends the 2013 National Religious Freedom Conference in Washington May 30. Hamilton, a pro-life Democrat and Catholic, was among panelists at the conference discussing challenges to religious freedom in the country. (CNS photo/Nancy Phelan Wiechec)

Citing examples of legislative proposals and the introduction of rules governing state-funded programs and schools, Oklahoma State Rep. Rebecca Hamilton, a Democrat, and Idaho State Sen. Curt McKenzie, a Republican, said they believe such efforts are intended to remove any religious influence from public life.

Hamilton, who identified herself as a pro-life Catholic, told the 150 people at the conference that she has been told by at least one constituent to “go to church all you want but leave it there.”

“The arrogance of telling me to ignore my religious beliefs … is a result of the ethos of the culture in which we live, in which it’s OK to attack people because of their faith,” Hamilton said.

“We’ve reached the point in this country that bashing people because of their faith is accepted, it is tolerated. You can get re-elected doing it. You can have big ratings on your television show doing it,” Hamilton said.

In response, legislators in some states have formed religious freedom caucuses, small groups of legislators committed to blocking attempts to limit religious practice.

Tim Schulz, state legislative policy director for the American Religious Freedom Program at the Ethics and Public Policy Center, said nine state caucuses have been formed in the last year. He told the conference similar caucuses are being formed in nine other states.

McKenzie, who spearheaded the formation of the Idaho caucus in 2012, said the group has helped protect religious freedom through the passage of a law allowing students at public universities to follow their own consciences and faith standards in forming groups and selecting their own leaders. Similar legislation has made its way to other states, he said.

“Don’t underestimate the ability of this program to influence policy at the state level,” McKenzie said. “Legislators find input from you as thought leaders invaluable.”

Jennifer Kraska, executive director of the Colorado Catholic Conference, expressed concern over what she described as “outright hostility” toward religious belief that emerged at times in debates in the Colorado Legislature.

She called for a broad-based effort to educate people about the threats to religious freedom that have emerged nationwide.

“I am hopeful that in Colorado we will someday soon put an end to these senseless attacks on religious liberty,” Kraska said. “I know for the vast amount of people in Colorado, the issue of religious liberty is not a partisan issue. Rather it is a constitutional value that must be protected and cherished.”

A round-table of six religious leaders of different faiths also explored concerns about limits on religious freedom, with several speakers addressing the importance of reaching out to young adults at a time when religious practice among members of that age group is declining.

“Young people in the 20-to-40 (year-old) demographic don’t understand our concerns,” said the Rev. Eugene F. Rivers III, senior policy adviser to the presiding bishop of the Pentecostal Church of God in Christ. “We’re using an eight-track tape in an iPad world.”

Rabbi Abba Cohen, director of the Washington office of Agudath Israel for America, urged the audience to challenge derisive comments about religion and religious practice.

“This indeed creates a more secular society,” he said. “This leads to the creation of a poison atmosphere in society to weaken laws protecting religious freedom.”

Speakers also raised concerns that discrimination against people of faith has increased in workplaces and schools and within government. Among examples cited were a business that restricts someone wearing a turban or a hijab from having public contact with customers, bullying of students representing a minority faith and rules that require men and women wanting to obtain a driver’s license or photo identification to uncover their hair in violation religious practice.

Amardeep Singh, director of programs with the Sikh Coalition, a Sikh civil rights organization, said that because such practices are growing, people of faith must stand together to defend one another. He also called for tolerance not just among people faith but in wider society.

The conference also heard from Rabbi Meir Soloveichik, director of the Zahava and Moshael Straus Center for Torah and Western Thought at Yeshiva University in New York, who urged participants to better understand their neighbors and appreciate their differences, especially when it comes to faith traditions.

Rabbi Soloveichik said America’s founders recognized the importance of religious freedom and the biblical concept of covenant that exists between God and people as well as among people. But he questioned whether government officials today understand those principles.

“In this day and age American public officials speak of freedom of worship rather than free exercise, as if our religious identity is reserved for the church and the synagogue and not something we take with us and freely obey in the public square,” he said.

NEXT: Scouts’ policy change said to be ‘not in conflict’ with church teaching