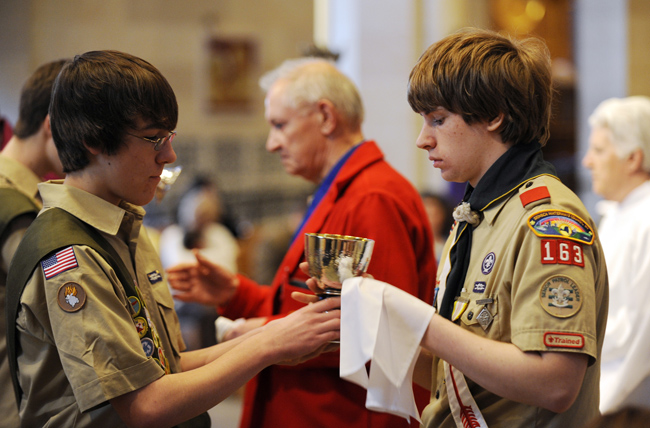 WASHINGTON (CNS) — The head of the National Catholic Committee on Scouting said the Boy Scouts’ vote in May to admit homosexual youth into their ranks is “not in conflict with Catholic teaching,” something by which “we should be encouraged.”

Edward Martin, the committee’s national chairman, said Scouting is “still the best youth-serving program available to all youth.” He added, “We need to use this opportunity to show our commitment to making Catholic Scouting a safe environment for all youth in which the Catholic faith is taught, practiced and nurtured.”

Martin’s message, dated May 29, was posted May 30 on the National Catholic Committee on Scouting’s website, www.nccs-bsa.org. He said he wrote it after reading mails, blogs, Facebook posting and several discussions, including with Bishop Robert E. Guglielmone of Charleston, S.C., liaison to the committee for the U.S. Conference of Catholic Bishops, and Father Michael Hanifin, national chaplain for Catholic Scouting.

Martin said the Catholic committee is not a voting member of the Boy Scouts of America but is a member of the organization’s Religious Relationships Task Force. In that advisory role, he said, the committee had expressed its concerns, including listing references to Catholic teaching, during a “listening period” established by the Scouts after it announced it was considering the policy change.

“The resolution appeared to respect those teachings and BSA’s responses to our concerns were satisfactory,” Martin said. “We felt that the Catholic Scouters selected as voters could, in good conscience, vote either for or against the resolution.”

Martin noted three principles that remain unchanged for the Boy Scouts despite the resolution’s approval.

“Any sexual conduct, whether homosexual or heterosexual, by youth of Scouting age is contrary to the virtues of Scouting,” he said. “The Boy Scouts of America does not have an agenda on the matter of sexual orientation, and resolving this complex issue is not the role of the organization, nor may any member use Scouting to promote or advance any social or political position or agenda,” Martin added.

The third principle is: “The Scout Oath begins with duty to God, and the Scout Law ends with a Scout’s obligation to be reverent. Those will always remain core values of the Boy Scouts of America.”

Martin cited section 2358 of the Catechism of the Catholic Church in accepting the new policy: “Individuals who disclose a homosexual inclination or a same-sex attraction are to be treated with the same dignity due all human beings created by God,” he said. “This teaching is followed in enrollment policies for Catholic schools, for Catholic sports programs, and for all programs of Catholic youth ministry.”

Since, as a result of the new policy, “no youth may be denied membership in the Boy Scouts of America on the basis of sexual orientation or preference alone,” Martin said, “we understand this to mean the following: A youth will not be prevented from receiving a rank award or religious emblem simply for having a same-sex attraction; a youth will not need to hide the fact that he has or experiences this attraction, but a youth also will not be encouraged or pressured to disclose publicly the experience of such attraction; (and) a youth thinking or knowing he has a homosexual inclination should not be afraid that he will be bullied or expelled by the Scouting community by disclosing his sexual orientation.”

He encouraged Catholics involved in Scouting to “seek understanding of the resolution, the church’s teaching on the subject, and to pray for wisdom. Change is hard, especially when we don’t understand why it’s occurring, what it means, and when we aren’t part of the process. NCCS will do its best to respond to your questions and concerns. We will pray for wisdom ourselves. We ask that Catholic Scouters and chartered organization heads not rush to judgment as the policy does not go into effect until Jan. 1.”

Martin said he found a May 26 posting by Edward Peters, writer of A Canon Lawyer’s Blog, helpful.

In it, Peters said, “Nothing in the new policy or in Boy Scout literature endorses or advocates the gay lifestyle; in fact all members are prohibited from using the Boy Scouts to promote ‘any social or political position or agenda.'”

Peters, who teaches at Sacred Heart Major Seminary in Detroit and in 2010 was appointed by Pope Benedict XVI as a referendary for the Apostolic Signature, the Vatican supreme court, also cited section 2358 of the Catechism of the Catholic Church in saying, “The burden of proof lies on those who would discriminate against persons experiencing same-sex attraction to justify that discrimination.”

“If Catholic sponsoring organizations and/or member families can’t conclude that the Boy Scouts are able — perhaps through no fault of their own — to deliver a youth program that actually operates within the parameters expressly — and I think defensibly — asserted by the Boy Scouts, then those Catholic organizations and families will likely decide that burdens of Boy Scout affiliation exceed the benefits,” Peters added.

“But, unless and until that conclusion is demonstrated on the evidence — and not largely on predictions — and notwithstanding that some elements of the gay lobby are likely treating the Boy Scouts as pawns in their own wider projects, I think that Catholics may, and should, take the Boy Scouts at their word. For now at any rate.”

NEXT: Immigration laws must reflect nation’s values, not its fears, nun says