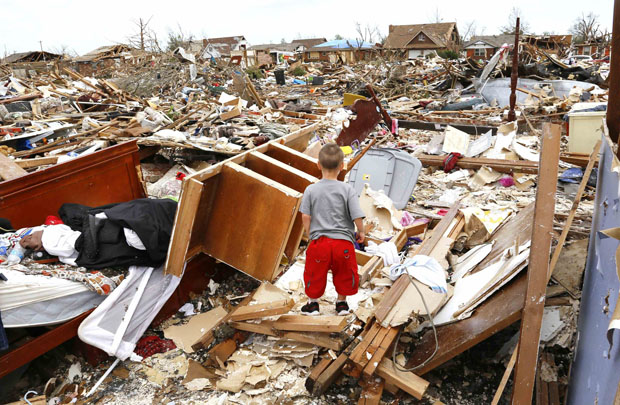 OKLAHOMA CITY (CNS) — As communities across central Oklahoma continued to recover from the “powerful and deadly tornadoes” of May 19 and 20, they have experienced an “overwhelming” outpouring of “prayer, love and support from across our great state and from around the nation,” said Oklahoma City’s archbishop.

“It is bringing comfort to those who have lost loved ones, suffered injuries and whose homes, businesses and properties have been damaged or destroyed,” Archbishop Paul S. Coakley said.

He made the comments in his column, “Put Out Into the Deep,” in the online issue of the Sooner Catholic, the archdiocesan newspaper.

On May 31, the western suburbs of Oklahoma City were hit by an EF3 tornado area. Thirteen people were killed, including two children.

Gov. Mary Fallin, who toured the damage in El Reno, about 30 miles from the city, said the death toll could rise. AP reported that a search was on for missing residents. The dead included three storm chasers who were doing tornado research, according to the Storm Prediction Center in Norman.

Eleven days earlier the suburb of Moore bore the brunt of an EF5 tornado. It hit mid-afternoon May 20, killing 24 people. More than 200 others were injured in that storm.

Among efforts to help victims of the deadliest storm system to hit the area since 2011, the Catholic community established a disaster response center at All Saints Catholic School in Norman. By June 3 several recovery centers were opened by state and federal agencies, including the Federal Management Agency. In addition many of the nation’s major insurance carriers had established an “insurance village” at a Baptist church to expedite people’s claims.

In his column, Archbishop Coakley said that response efforts were “still fluid and adapting to changing needs and circumstances.”

But in the days since the worst tornadoes, “emergency responders, relief workers, counselors, chaplains, friends, neighbors and strangers,” have come together “to bring comfort and sustain hope where hope has been shaken,” Archbishop Coakley said. “And Jesus still weeps. God is with us.” 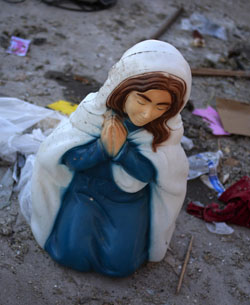 A statue of Mary sits in the front yard of a damaged house in Moore, Okla. (CNS photo/Adrees Latif, Reuters)

The Catholic community “stands shoulder to shoulder with religious, government and volunteer organizations and agencies” to assist in the recovery, he continued.

He noted that each has had a “different role in the response.”

“Some are first responders. Others offer assistance with cleanup and with immediate needs such as temporary shelter, meals and clothing. Some help facilitate spiritual, physical and emotional healing. Still others focus on long-term needs in accessing community resources,” he added.

He said parish clergy and staff members in the affected areas “have been engaged from the beginning. They have been contacting parishioners and assessing needs.”

He praised Catholic organizations such as Catholic Charities USA, the Knights of Columbus and the Society of St. Vincent de Paul for “reaching out and providing support in the various areas affected by these devastating storms.”

The Knights’ national organization set up relief efforts in St. Andrew Church in Moore, where the twister hit hardest, to coordinate response to community requests and to register volunteers. A few days after the tornado members of the local Knights council visited parish families to assess property damage and people’s needs.

Archbishop Coakley called the Knights’ efforts “incredible” and said that in addition to addressing immediate needs and offering counseling, Catholic Charities and St. Vincent de Paul “are offering long-term case management to help storm survivors rebuild their lives over the course of many months to come.”

During a May 26 visit to Moore to view the devastation, President Barack Obama praised residents for inspiring the nation “with their love, their courage and their fellowship.”

“This is a strong community with strong character. There’s no doubt they will bounce back. But they need help,” he said, assuring the community of the federal government’s ongoing help with cleanup and rebuilding efforts.

The tornado killed 24 people, 10 of whom were children, including seven from an elementary school that was destroyed. About 350 families lost their homes.

Archbishop Coakley expressed gratitude for Pope Francis offering a special prayer for the tornado victims during his early morning Mass May 21 and that he sent his condolences. He said he was thankful, too, for the letter he received on behalf of the Catholic community from Cardinal Timothy M. Dolan of New York, president of the U.S. Conference of Catholic Bishops.

In a letter to all the U.S. bishops, Cardinal Dolan requested they urge their pastors to take up a special collection over the coming weeks to assist in recovery efforts from the tragic storms in Oklahoma and from other natural disasters that the Catholic Church and the country “may suffer this year.”

“I request that we broaden this appeal in anticipation of more domestic disasters possibly awaiting us this year.”

He said the funds collected in “this one-time special appeal for the 2013 storms and disasters” will be used to support the efforts of the USCCB and Catholic Charities USA, the official domestic relief agency of the U.S. Catholic Church, “as they respond to immediate emergency needs for such necessities as water, food, shelter, and medical care, as well as to the long term need to rebuild after widespread destruction, and to the pastoral and reconstruction needs of the church.”

Cardinal Dolan added that the church is still responding to the needs of dioceses affected by last year’s Hurricane Sandy.

“The church must serve as a primary source of healing and peace when tragedies such as this occur. However, as is so often the case, the church itself is both an aid responder and a victim,” he continued, adding that in some places hit by Sandy church structures were damaged “and resources depleted.”

Archbishop Coakley in his column noted that in his archdiocese damage sustained by the area’s religious institutions was “minimal.”

Cardinal Dolan in his letter of May 22 acknowledged that on the weekend of June 29-30, many dioceses are also scheduled to take up the Peter’s Pence Collection in support of the Holy Father, and he urged bishops “not to substitute one collection for another, as the generosity of Catholics is widespread in response to individual needs.”

Businesses are pitching in, too, to help with Oklahoma recover efforts. For example, Love’s Travel Stops & Country Stores, a chain of more than 200 truck stops and convenience stores, announced it will donate $3 million to support immediate and long-term relief efforts in Oklahoma; $500,000 was to go to Catholic Charities.

The recovery ahead, Archbishop Coakley wrote, “is going to be a marathon, not a sprint. We are never alone in our distress and suffering. Through the love and kindness of both neighbors and strangers Jesus is demonstrating his faithfulness.”