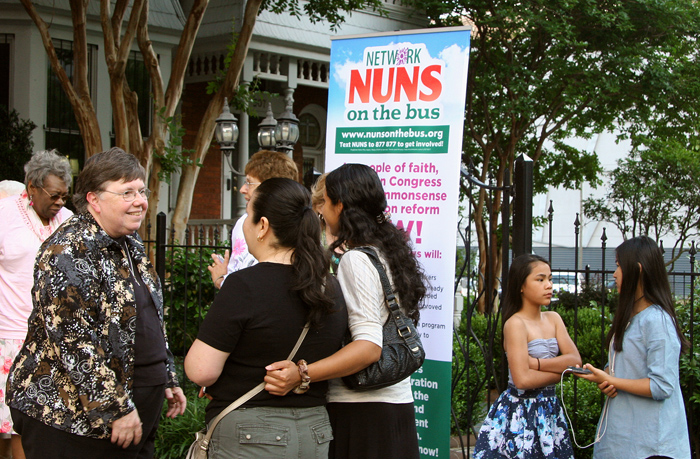 Mercy Sister Rose Marie Tresp of Charlotte, N.C., left, talks with supporters as the "Nuns on the Bus" campaign stops at St. Peter's Church in Charlotte May 31. This second bus tour, making its way through Southern states and the Southwest, was being sponsored by the Catholic social justice lobby Network to highlight the need for comprehensive immigration reform. (CNS photo/Patricia L. Guilfoyle, Catholic News Herald)

CHARLOTTE, N.C. (CNS) — Three days into its 6,500-mile journey from Ellis Island in New York to Angel Island in San Francisco, the “Nuns on the Bus” tour for immigration reform cruised into Charlotte May 31 — fueled by a cheering crowd outside St. Peter Church.

The bus campaign, dubbed the “Network Nuns on the Bus: A Drive for Faith, Family and Citizenship,” is rallying support for immigration reform legislation currently being debated by the U.S. Senate. A total of 29 women religious planned to go along for at least part of the trek through 40 cities in 15 states.

Organized by Network — a Catholic social justice lobby led by Sister Simone Campbell, a Sister of Social Service who made headlines as a speaker at the 2012 Democratic National Convention in Charlotte — the “Nuns on the Bus” tour is modeled on a similar campaign through the Midwest last summer that denounced U.S. House Republican budget cuts.

This second bus tour kicked off May 29 in New Jersey and was scheduled to end June 18 in San Francisco, stopping along the way at churches and U.S. senators’ offices in the South and Southwest to advocate for comprehensive immigration reform.

Sister Campbell was not at the rally May 31 because of a speaking engagement, organizers said, but she rejoined the bus tour June 1 as it rolled out of Charlotte and on to Greenville and Charleston, S.C.

Leading the Charlotte rally in her place was Sister Mary Ellen Lacy, a Daughter of Charity from Brooklyn, N.Y., who works with Network.

“We are all God’s children,” Sister Lacy told the crowd of about 150 supporters gathered at St. Peter’s. “Our laws should reflect our values, not our fears.”

She urged people to call their senators and talk with their friends and co-workers about the need to pass the Senate immigration reform bill S. 744, which is expected to come to the Senate floor for amendments, debate and vote perhaps as soon as this month. A House bill is being written by a bipartisan panel of eight members, but its details have not been released.

Immigration reform has bipartisan support and polls show a majority of Americans favor it, but Senate work on the legislation has recently slowed.

The U.S. bishops have long advocated for immigration reform, stressing the need for a path to legal status for the estimated 11 million undocumented people in the U.S. and in particular reforms that preserve family unity; ensure just wages and working conditions for immigrant workers; provide for humane law enforcement; and address the root causes of migration.

Sister Lacy drew a connection between the scars on Jesus’ resurrected body and the “battle scars” immigrants have endured from their perilous journeys to America and from severe law enforcement practices. Just as Jesus wounds were intact when he arose from the dead, “we need to remember their battle scars,” she said. “We need to take with us that pain.”

“Jesus returned. He was God, he didn’t need to keep those scars, but he kept them. And what purpose did they serve? So that when the doubters came to him, they could touch his pain and they could be changed. They could be transformed, and they could follow him. That’s the same thing we’re called to do,” Sister Lacy said, as descendants of immigrants.

She rattled off various immigration controls throughout U.S. history, then noted: “Every generation has chosen a group that they decided the economy couldn’t handle, the jobs weren’t enough, so they discounted them. And every subsequent generation lived to be properly ashamed of themselves.”

Sister Rose Marie Tresp, justice director for the Sisters of Mercy for the geographic area that includes most Southern states, said she could tell many stories of how the nation’s immigration system is hurting people, but her voice broke when she talked particularly of her brother-in-law Jose Chavez, “who came during the Salvadoran wars when he saw his father shot in front of him.”

“So I really, really believe that we need immigration reform for the sake of all of those people who suffered in our country, but also for our own sake — because we will be a better country, we will be a more unified country, and all of us whose families have been here for generations will gain by the people who then are able to become fully citizens and not live in the shadows,” Sister Tresp said.

“With this tour of ‘Nuns on the Bus,'” she said, “we hope to raise awareness that the opportunity for immigration reform is now. Our goal is to get the support of as many everyday Americans for this bill as possible.”

Camilla Martocchia, a Mercy associate, said she came to the Charlotte rally because she wanted to show support for the Sisters of Mercy and their hard work helping immigrants in need.

“It’s very important for the average Catholic layperson to get an idea of what people are going through,” Martocchia told the Catholic News Herald, Charlotte’s diocesan newspaper.

Deborah Adams traveled 70 miles from Cheraw, S.C., just to see the “Nuns on the Bus” rally. “I love them,” Adams said, adding that she isn’t Catholic. “I love what they do. They speak truth to power.”

Rally participant Tom Strini said as the son of an Italian immigrant, immigration reform is of particular concern to him.

“I take very seriously the biblical passage where Jesus calls us to welcome the stranger,” Strini said. Building fences, deporting people and breaking up families are not Christian, he said. “We’re not loving our fellow human beings when we do all these things.”

On May 30, during the “Nuns on the Bus” tour through Washington, Sister Campbell met with President Barack Obama at the White House to talk about immigration reform and the bus tour.

On Network’s blog, Campbell wrote, “We are grateful that he and other leaders from both sides of the aisle see the urgency of reform and are working to make it happen. A special thank you to the president for his warm words about the work we are doing and our journey for immigration justice!”

Guilfoyle is editor of the Catholic News Herald, newspaper of the Diocese of Charlotte, N.C.

PREVIOUS: Scouts’ policy change said to be ‘not in conflict’ with church teaching