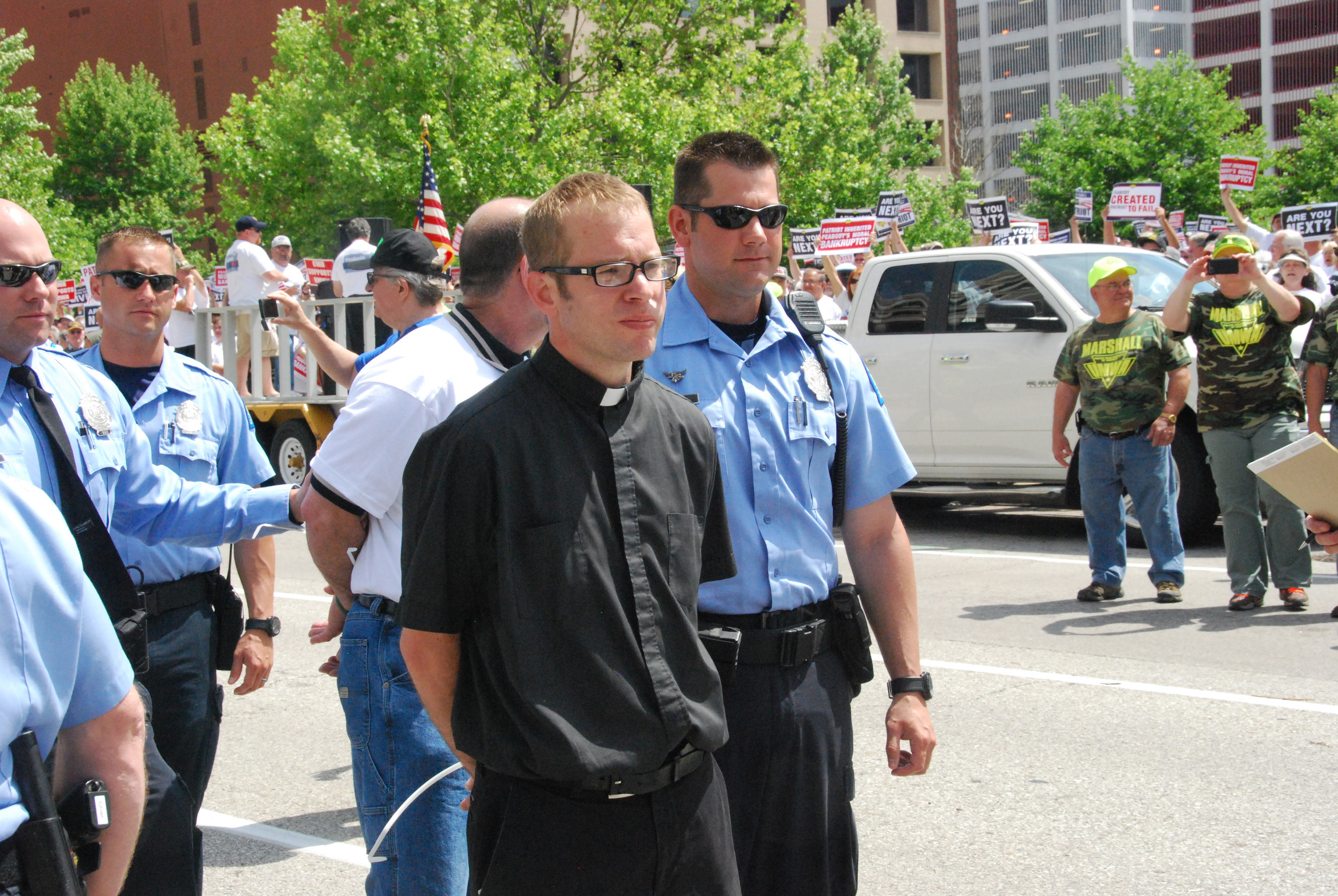 WASHINGTON (CNS) — Until May 21, Father Andrew Switzer had a clean record. Then he got himself arrested.

It happened in St. Louis during a rally by the United Mine Workers of America protesting the actions of Peabody Energy, the world’s largest coal producer. The 33-year-old priest, two years out of the seminary, said it was the right thing to do two days after Pentecost even as the arrest was pre-arranged with local police.

The action, Father Switzer told Catholic News Service, was the least he could do.

He said his arrest with 11 others was one way to live out the social teachings of the church and be in solidarity with more than 26,000 current and retired mine workers faced with the loss of salary and reduced pensions and health care coverage through no fault of their own.

The rally was one of several in an ongoing series organized by the union to protest a complex set of business maneuvers by Peabody and Arch Coal, another major player in the coal industry, and the bankruptcy of Patriot Coal, a business spinoff.

Critics believe the actions by Peabody and Arch were a deliberate attempt to shed costly pension and health care liabilities.

Father Switzer, associate pastor of St. Margaret Mary Parish in the Ohio River town of Parkersburg, W.Va., considers the business transactions disrespectful of workers who sacrificed salary and other benefits during their working days for assurances that their needs would be met during retirement.

“My dad’s a coal miner, so I grew up with watching my dad deal with these situations,” he explained. “I was involved as a child in the 1980s when the UMW was protesting Pittston. My dad was in union leadership at the time.

“I learned Catholic social teaching firsthand watching my dad at the rallies and being involved in the labor union.

“In our state we have a long history of government and companies siding together against the working person,” Father Switzer continued. “Even though the dynamics have changed, I find it interesting that that’s still a problem.”

Records show that Patriot was spun off in 2007 by Peabody, which placed all of its unionized mines in Kentucky and West Virginia and more than 40 percent of its liabilities to retirees into the new company. Arch Coal did much the same two years earlier by creating Magnum Coal and placing its unionized mines in that company. Patriot absorbed Magnum in a $695 million deal in 2008.

The arrangement means that very few of the thousands of retirees ever worked for Patriot but still are dependent on the company for their retirement benefits.

Then, Patriot filed for bankruptcy last July 9, saying it could not afford the $1.6 billion in pension and medical insurance called for under contracts with the UMW.

Under a reorganization plan approved by Judge Kathy Surratt-States, of the U.S. Bankruptcy Court for the Eastern District of Missouri, Patriot can eliminate its collective bargaining agreements with the UMW and cut retirement benefits as soon as July 1.

Surratt-States’ decision has been criticized by mine worker supporters, elected officials and faith leaders, including Glenmary Father John Rausch, director of the Catholic Committee on Appalachia. Earlier statements by the Catholic Conference of West Virginia and the West Virginia Council of Churches raised moral questions about the actions of the coal firms.

Patriot president and chief executive officer Bennett K. Hatfield said in a statement that the ruling is critical to the company’s reorganization and will help preserve more than 4,000 jobs.

He said the company prefers to negotiate with the union to reach an agreement rather than impose cuts unilaterally.

“While the court has given Patriot the authority to impose these critical changes to the collective bargaining agreements, and our financial needs mandate implementation by July 1, we continue to believe that a consensual resolution is the best possible outcome for all parties,” Hatfield said.

The UMW and its supporters rallied again June 4 on the steps of the Henderson County Courthouse in Henderson, Ky., home of a Patriot Coal regional office. Several more symbolic arrests were made. Union officials announced that rallies would continue throughout the summer in St. Louis and West Virginia.

As the son and grandson of coal miners, Father Switzer knows that the decades-long struggle by coal miners for safe working conditions, a living wage, adequate pensions and comprehensive health care coverage will continue as long as necessary. He also knows that the mine workers likely will face a protracted battle in the courts as well as the court of public opinion if they are to achieve the justice envisioned by Catholic social teaching.

The priest said he expects to join the rallies in the future and consider being arrested again in actions of nonviolent civil disobedience.

“I can only speak for my own conscience and convictions, the times I’ve been there thinking about comforting the afflicted and afflicting the comfortable,” Father Switzer said. “The church needs to be on the front lines of this. The more people see we’re with the working person, the more they see it comes out of our roots in Catholic social teaching.

“It’s more than just about coal to me. It’s about the importance of people and the dignity of the human person and how the workers are treated. I’m glad we have such a rich teaching, but it’s often not articulated or lived out. You usually feel it’s left in the back. I think this is one way the church can get involved and put this teaching front and center.”