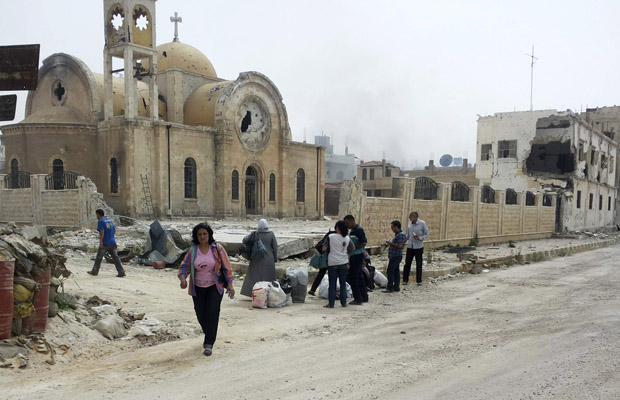 Residents walk near a damaged church June 8 in Qusair, Syria, on their way to inspect their houses and collect their belongings. (CNS photo/Rami Bleibel, Reuters)

VATICAN CITY (CNS) — Calling the Syrian conflict “a great tribulation,” Pope Francis said tensions throughout the Middle East must give way to dialogue and reconciliation.

“Once again, from the depths of my heart, I appeal to leaders of nations and international organizations, to believers of every religion and to all men and women of good will to put an end to the suffering, all the violence and every form of religious, cultural and social discrimination,” the pope said.

“Conflict that sows death must give way to encounter and reconciliation, which bring life,” the pope said June 20 during a meeting with two dozen Catholic charitable and funding agencies that assist the Eastern Catholic churches and Catholics throughout the Middle East.

The groups, which include the Catholic Near East Welfare Association in the United States and Canada, the U.S. bishops’ Catholic Relief Services, the Equestrian Order of the Holy Sepulchre of Jerusalem and Aid to the Church in Need, meet twice a year under the auspices of the Congregation for Eastern Churches.

The June 18-20 meeting focused on Egypt, Iraq, Syria and the Holy Land.

Pope Francis asked the funding agencies to “do everything possible to alleviate the serious needs of the stricken populations, particularly the Syrians — the people of beloved Syria — as well as the increasing number of displaced and refugees.”

Pope Francis said also Catholics must be grateful to their brothers and sisters in the Middle East and members of the Eastern Catholic churches who have kept their faith despite suffering and even persecution.

“To all those who are suffering, I say: Never lose hope! The church is alongside you, accompanies you and supports you,” he said.

Pope Francis also thanked the funding agencies who assist others with a charity that flows from the love of God.

NEXT: UK archbishop calls for wider recognition of fathers in family life