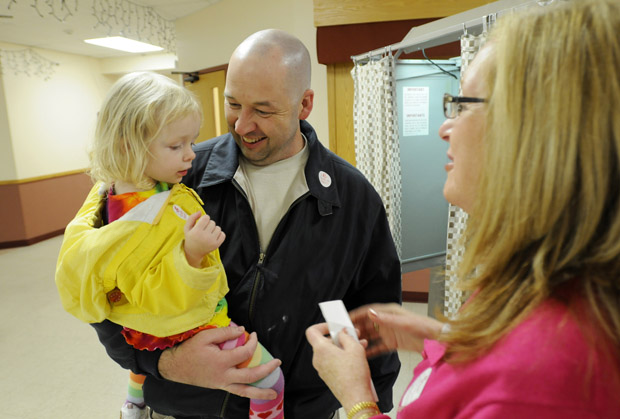 MANCHESTER, England (CNS) — The love a husband demonstrates for his wife serves as an example of respect to the couple’s children, the leader of the Catholic Church in England and Wales said.

“Committed, faithful fathers are good for their children, for their educational achievement, psychological well-being and their social behavior,” said Archbishop Vincent Nichols of Westminster in a June 19 speech in London.

He said one of the best examples a father could give to his sons and daughters is to love their mother.

“To a significant degree, a father influences his children through the quality of his relationship with the mother of his children,” he said in his speech at the Citizens UK Summit for Civil Society Leaders at Queen Mary, University of London.

“When he enjoys a healthy relationship with her, he’s probably going to spend greater time with his children,” he said.

“A mother who is genuinely loved and valued by her children’s father shares this affirmation with her children,” the archbishop continued. “Evidence indicates that fathers who treat the mother of their children with respect, and deal with conflict in an adult and appropriate manner, are more likely to have sons who understand how they are to treat women and who are less likely to act in an aggressive fashion towards them.

“Girls with respectful fathers involved in their upbringing learn how they should expect men to treat them,” he said.

“They are less likely to become ensnared in violent or unhealthy relationships,” he added. “Whilst, of course, many generous and committed fathers are found outside of marriage, it seems that they are more likely to be found within the bond of marriage itself.”

The archbishop’s comments came during a meeting of public figures to discuss future challenges to family life.

He was joined by Anglican Archbishop Justin Welby of Canterbury and by Jewish, Muslim and trades union leaders.

In his address, Archbishop Nichols told the audience that the most “satisfying title” for any priest was “Father.”

The title, the archbishop said, implied a central role of helping to raise the next generation, of nurturing a sense of vocation in the young and of faithful service to others anchored in a developing relationship with God.

Archbishop Nichols admitted that, like priests, not all fathers were “brilliant”, and said he had no desire to “belittle mothers bringing up children on their own.”

“Yet this should not stop us celebrating fatherhood and highlighting the positive contribution fathers make to families and to society,” he said.