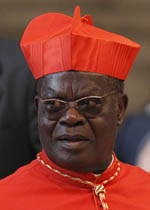 MONTREAL (CNS) — The Catholic Church, through its pastoral work and the promotion of justice, can help bring stability and peace in violence-torn Congo, said a cardinal who once helped guide the country from dictatorship to democracy.

Cardinal Laurent Monsengwo Pasinya of Kinshasa, Congo, told Catholic News Service June 10 that the church would step back from having a direct political role.

In Montreal to meet with the Congolese community and consecrate the new Our Lady of Africa Parish, the cardinal expressed disappointment that the country has not achieved the peace envisioned in the 1990s as a new constitution was written and democratic elections were instituted.

Back then, Cardinal Monsengwo, a human rights champion, was intimately involved in building up democratic foundations in Congo. In 1991 as archbishop of Kinsangani, he was appointed to lead the Sovereign National Conference, which helped lead the transition to democracy. He went on to become president of the High Council of the Republic and was nominated as speaker of the transitional parliament in 1994.

Two decades later, the cardinal lamented that the chance for long-term peace was squandered.

“We did a marvelous job,” the cardinal, 73, recalled of the period in which dialogue and social inclusion led to a new constitution and the country’s first democratic elections. “But what we put together was never applied,” he said referencing the constitution and the legal principles of the transition.

Congo remains at war today as warlords vie for control of eastern regions where precious metals and minerals used in the manufacture of high-tech electronic components are mined. The violence has claimed millions of lives and uprooted untold numbers of civilians since 1998. There is a general state of impunity for the warlords and human rights violators, as well as a government re-elected in 2011 in elections that Cardinal Monsengwo himself at the time said responded to “neither truth nor justice.”

He blamed the violence on the neighboring countries of Rwanda, Burundi and Uganda “with the complicity of multinational corporations and the great powers.”

“What a mess,” he sighed, reflecting on the lost opportunities for peace. Those responsible for violence have never publicly asked for pardon, as was called for by the conference, and a constitutional ban on taking power by armed struggle was not respected.

Cardinal Monsengwo recalled a particularly painful memory: when armed groups shot at his residence in Kisangani, where he was assigned until 2007. “When they knew I was there, they shot right into my lounge,” he said.

The opportunity that the country once had to create a stable and prosperous democracy will not come back, the cardinal said.

The church has been increasingly marginalized by Congolese authorities, he explained, citing the growing gap in the values of the government and those of the church. “Our values are those of promoting the common good, life and solidarity, as well as transparency in state affairs. These are not the values of this government,” Cardinal Monsengwo said.

The cardinal said that despite the church’s past direct involvement in government affairs, it is time to take a back seat.

“The time has come for the country’s religious to return to their pastoral role, and leave running the country to laypeople,” he said.

The Congolese bishops’ conference recently banned priests and men and women religious from participating in the nation’s Electoral Council, whose membership is up for renewal. A former president was Father Apollinaire Malu-Malu, who was largely credited with organizing the successful 2006 general elections.

“The electoral law is badly thought out,” Cardinal Monsengwo said, noting that its membership includes six pro-government politicians and four members of the opposition. “What could one priest do in a set up like that?” he asked.

Despite the setbacks and his obvious disappointment in the evolution of democracy in Congo, Cardinal Monsengwo said he still believes in Africa. His is a continent that would have disappeared four centuries ago, swallowed by “colonialism, slavery and neo-colonialism,” without Africa’s strong sense of endurance, and values of life, he said.

The African church must continue its mission of announcing the gospel, and promoting the four pillars of love, justice, peace and development.

“When a society espouses these values, it can resist anything,” he said.

Cardinal Monsengwo declined to discuss his role as one of eight cardinals who will work with Pope Francis to reorganize the Roman Curia.

“I prefer to keep that for Pope Francis,” he said. “I would be lacking in manners to talk about the advice I plan to give him.”

But it does not seem unreasonable to conclude that the most senior churchman of the continent that Benedict XVI called the “lung of the church” will bring to the table the values of endurance and resistance that are those of Africa, and the Congo.

“We must lift up our heads once again if we believe that Christ is risen. The Congo is not condemned to death, but to life, and we must promote those values of life in order to get the country back on track.”

NEXT: Pope Francis talks with bishops about working together more closely