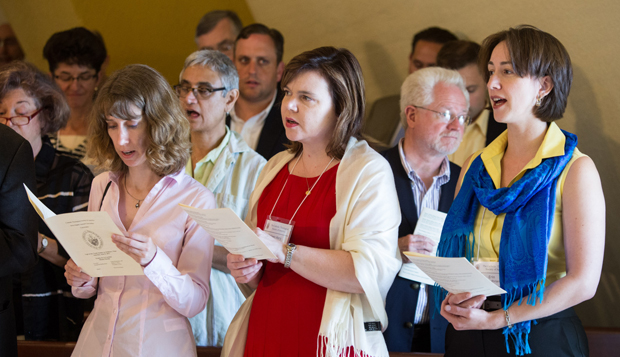 MIAMI (CNS) — Look for strong turnout, robust media interest and unscripted moments when Jorge Mario Bergoglio makes his first trip abroad as Pope Francis when he arrives in Brazil in late July, according to a Brazilian writer and academic.

In the Archdiocese of Rio de Janeiro, final preparations are underway for the 2013 World Youth Day with Pope Francis July 23-28 around the sprawling Brazilian city.

“He has a lot of charisma and it will be good to see that with the youngsters,” said Maria Clara Luchetti Bingemer, an associate professor of Theology at Pontifical Catholic University of Rio de Janeiro who is regarded as an expert on lay spirituality and leadership in the Catholic Church in Brazil.

“We are expecting more than 2 million people, houses are being prepared, families are welcoming the pilgrims, the university will be closed so that the youngsters can sleep there,” said Bingemer, who was in Florida to speak to the Catholic Theological Society of America during its annual convention June 6-9 at the Hyatt Regency Miami Hotel.

She is a leader in the Jesuit-founded lay movement, Christian Life Communities and also was regional coordinator of the Latin American Ecumenical Association of Third World Theologians from 1986 to 1992.

Pope Francis will arrive in Rio and first visit the National Shrine of Our Lady of Aparecida July 24, followed by a visit to a new drug rehabilitation facility and a visit to a slum in Rio’s North Zone before the festive opening of World Youth Day on Copacabana beach July 25.

“Our local archbishop is very good with communications and has good relations with the TV and radio stations and the media in general, so it will be a well-covered visit. It was hard to find a place to have the closing Mass,” Bingemer said. “They fear it will be more than 2 million people.”

A native of Rio, Bingemer, who wrote a chapter for the new book “Pope Francis: Hope Reborn,” describes Pope Francis’ style as simple and direct, with a “de-centered and collegial” style of pastoral leadership, a renewed emphasis on the Second Vatican Council and of the centrality of the poor.

“I think it is very comforting for us from Latin America,” Bingemer said of having a pope from neighboring Argentina.

Based on Pope Francis’ lively interactions with audiences at the Vatican since being elected in March, she expects he will likely have a significant impact during his visit to Brazil.

“This pope is very used to moving around, to being everywhere. I think the best word to describe the feelings is ‘hope’. We have a lot of hope in this new way of being pope and for what will be his first international trip and to speak to the youth, the new generations.”

“There will be many surprises, and I think it will be very good,” Bingemer added.

In Brazil, the various lay movements such as Focolare and others are popular among Catholic laity in Brazil as well as a locally popular method for reading and understanding the Bible developed by a Carmelite monk from Belo Horizonte.

In Rio, Pope Francis can expect to find what Bingemer calls a post-modern youth shaped by the same materialism and cultural forces that contemporary youth anywhere might experience.

“Consumerism is the post-modern ideology and I hope the pope can say some strong words about the need to look to the poor, to be interested in them,” she said, adding that visitors to Rio should prepare to experience a very beautiful city but also one marked by contrasts with very rich and poor living in close proximity.

Brazil, she said, had been known as the country with the largest number of Christian base communities and small faith-sharing groups popular in Latin America especially, “and I am confident it will come back,” Bingemer said.