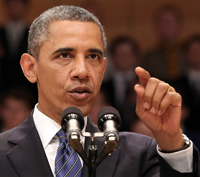 DUBLIN (CNS) — A bishop in Northern Ireland accused President Barack Obama of a “hackneyed” analysis of the political situation in the region.

Auxiliary Bishop Donal McKeown of Down and Connor said some parts of the president’s June 17 speech in Belfast, Northern Ireland, echoed “the Protestant/Catholic caricature that has actually receded into the background in Northern Ireland.”

Obama was in Northern Ireland June 17-18 with leaders of the Group of Eight nations for a summit aimed at tackling controversial issues including the civil war in Syria and the global financial crisis.

Before the summit got underway, however, Obama addressed 2,000 young people and community leaders at Waterfront Hall and called for a renewed focus on reconciliation, 15 years after the Good Friday peace agreement.

Looking to the future, the president said, “if towns remain divided — if Catholics have their schools and buildings and Protestants have theirs, if we can’t see ourselves in one another and fear or resentment are allowed to harden — that too encourages division and discourages cooperation.”

Bishop McKeown said the 1998 accord “was clear that the core problem in Northern Ireland was a political one. … It is significant that religion did not appear in the agreement on what is primarily a political problem.”

He said that “it is the Catholic schools in Northern Ireland that are now actually among the most racially and linguistically mixed. And, while so many young people are very open to new friendships and opportunities, it needs to be stated that it is adults outside schools who promote mistrust for their own political and personal agendas.”

“A simplistic denominational vocabulary fails to do justice to where we are,” added Bishop McKeown, who chairs the Northern Ireland Commission for Catholic Education.

“We all welcome the president’s presence,” the bishop said, “but would encourage his speechwriters to support a less hackneyed analysis of our situation and prospects.”

The White House had no immediate response.

NEXT: Quebec at a crossroads with euthanasia bill, province’s bishops say