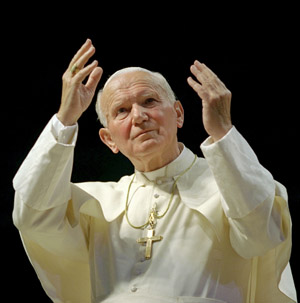 Blessed John Paul II gestures to the crowd at World Youth Day in Denver in 1993.

VATICAN CITY (CNS) — Although the process is not complete and is supposed to be secret at this point, Italian media are reporting that the canonization of Blessed John Paul II is another step closer.

The Italian news agency ANSA and many Italian papers say Vatican sources confirmed June 18 that the theological consultants to the Congregation for Saints’ Causes affirmed that the description of prayers and events surrounding an alleged miracle provide evidence that the healing was accomplished through the intercession of the late pope.

The congregation’s board of physicians had said in April that there was no natural, medical explanation for the healing, which apparently involves a woman from Latin America healed May 1, 2011, just hours after Blessed John Paul was beatified.

Even if the news about the theological consultants is true, the cardinals who are members of the congregation still must vote on whether to recommend that the pope recognize the healing as a miracle. The papal decree is needed before a canonization date can be set.

Polish Cardinal Stanislaw Dziwisz of Krakow, Blessed John Paul’s longtime secretary, and many others are hoping the canonization can be celebrated in October around the 35th anniversary of Pope John Paul’s election Oct. 16, 1978.