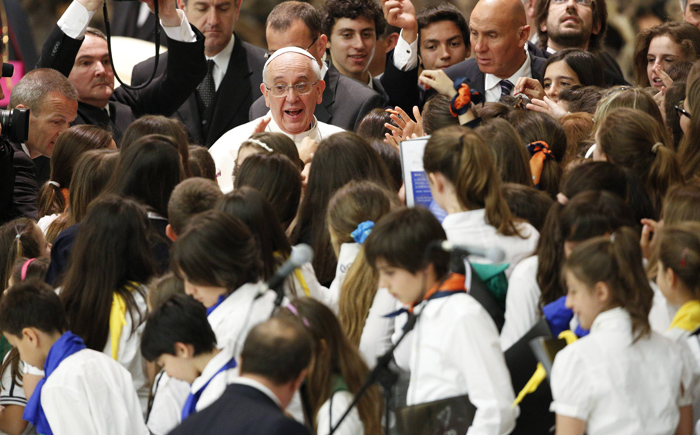 VATICAN CITY (CNS) — Pope Francis ditched a 1,250-word prepared speech to students saying it would be “a tad boring” to read out loud and opted instead to just quickly hit the high points and spend the rest of the time answering people’s questions.

“Would you like that?” he asked as some 9,000 students, alumni and teachers from Jesuit-run schools and associations in Italy and Albania yelled “Yes” with cheers and applause.

Then over the course of 30 minutes, Pope Francis answered 10 questions, including how to deal with doubt, how to live with hope in a troubled world and whether Christians should be politically active.

The special event in the Vatican’s Paul VI hall June 7 was an occasion for young people, parents and educators to highlight the Jesuit charism, particularly in the field of education, and to celebrate the election of the first Jesuit pope in the church’s history.

The pope is well-versed in the field since when he was Jesuit Father Jorge Mario Bergoglio, as he spent a number of years teaching literature, psychology and other subjects at Jesuit-run schools in Argentina.

The event’s presenters seemed hesitant about the pope’s request, saying no questions had been prepared in advanced and warning him that the students from elementary, middle and high school would just be “winging it.”

One girl asked him why he chose not to live in the apostolic palace.

“It’s not just a question of wealth,” he responded, adding that the now uninhabited papal apartment “is not that luxurious, don’t worry.”

His decision to live in a simple Vatican-run residence wasn’t motivated by trying to live up to some kind of “personal virtue,” but rather “it’s for psychiatric reasons,” he said teasingly.

Living alone or in an isolated setting “would not do me any good” and he said he’s the kind of person who prefers living in the thick of things, “among the people.”

But he did add that he tries to live as simply as possible, “to not have many things and to become a bit poorer” like Christ.

He urged everyone to try to live more simply saying, “In a world where there is so much wealth, so many resources to feed everyone, it’s incomprehensible how there can be so many hungry children, so many children without an education, so many poor.”

Extreme poverty in the world “is a scandal” and “a cry” for help, he said. That is why “each one of us must think how we can become a little bit poorer” and more like Christ.

One teenage boy told the pope that he was trying hard to believe in God and be faithful, but that he often struggled with doubt. “What can you say to help me and others like me?” he asked the pope.

Pope Francis said the journey of life “is an art” that isn’t easy because it requires juggling the need to move forward with the importance of taking time to reflect.

“If we walk too quickly, we’ll get tired and won’t be able to reach our destination,” yet if we stop or take our time “we won’t get there either.”

Life’s journey “is truly the art of looking at the horizon, reflecting on where I want to go, but also putting up with the fatigue from this journey,” he said.

Don’t be afraid of failure,” he insisted. The problem with the journey of life and faith isn’t falling; it’s not getting back up.

“Get right back up, immediately, and keep going,” he said.

Don’t embark on this journey alone either, he said, because that would be “awful and boring.” Go as a “community with friends and people who care about you very much because that will help us get to our destination,” he said.

One little girl wanted to make sure the pope had friends growing up in Argentina and, wanted to know if, now he was pope, whether he was still friends with them.

Laughing, the pope said he’s only been pontiff for two and a half months, but as she rightly imagined, all his friends were now far away, “14 hours by plane” to be exact.

However, so far, three friends have come to visit him and he stays in touch with the others who all write to him.

“I love them very much,” he said, “You can’t live without friends, this is important.”

Another little girl asked, “Eh, Francis, did you want to become pope?”

He laughed and said a person who wants to become pope doesn’t have his own best interest at heart. “God doesn’t give him his blessings. No, I didn’t want to become pope,” he said.

A young woman asked how it was possible to stay hopeful in a country plagued by so many crises.

The pope said crises are good when they force people to address their root cause — the complete disregard for the human person.

“Today people don’t count, money counts,” he said. However, God gave the world and its resources to men and women, “not to money.”

People have become slaves, and Christians have the duty to defend the human person.

“We have to free ourselves from these economic and social structures that enslave us.”

The one adult — a Spanish and religion teacher — who asked the pope a question, wondered what kind of role, if any, Catholics should play in politics.

The pope said Catholics have “an obligation to get involved in politics.”

“We can’t play the role of Pontius Pilate and wash our hands of it,” he said. “Politics is one of the highest forms of charity because it seeks the common good.”

He said those who complain that politics is “too dirty” should ask themselves why. Perhaps it’s “because Christians haven’t gotten involved with an evangelical spirit.”

It’s easy to blame others, he said, but people need to ask themselves: “Me? What am I doing” about it?