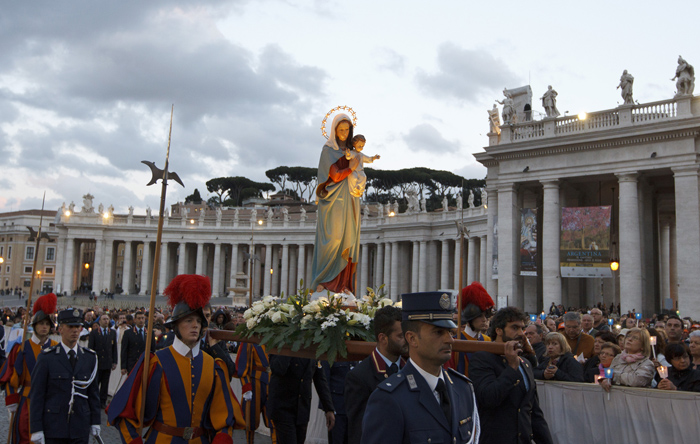 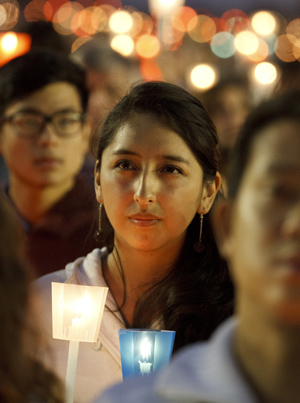 A young woman holds a candle during a Marian prayer service led by Pope Francis in St. Peter’s Square at the Vatican May 31. (CNS photo/Paul Haring)

VATICAN CITY (CNS) — “Children are the ones Jesus loves most,” Pope Francis told a group of young cancer patients and their parents at the Vatican May 31.

The pope had invited the 22 children, who are being treated at the pediatric oncology ward of Rome’s Gemelli Hospital, after they went on a pilgrimage to the Shrine of Our Lady of Lourdes in France and sent Pope Francis drawings of the shrine’s famous grotto because he had never been there.

A young girl, Michelle Nugnes, spoke to the pope on behalf of her peers, telling him it was so nice to see him in person rather than on television, explaining the drawings and assuring him, “We promise to continue praying for you and we ask you to pray for all the sick children at Gemelli and throughout the world.”

“Bless all our moms and dads so they always will have a beautiful smile like yours,” she added.

Before blessing and greeting each of the children, Pope Francis told them a blessing is “God’s embrace.”

He asked the children if they knew what Jesus did when he saw a child crying. “Jesus stopped. Why? Because children are the ones Jesus loves most. That’s how Jesus is.”

“Jesus loves us very much. All of us,” the pope said. “He is close to us and walks with us through life — when we are sad and when we have problems.”

The children brought small gifts to the pope. An 8-year-old boy, identified only as Giovanni, asked the pope if he had a sweet tooth. The pope responded, “Very much. I like sweets. Chocolate,” although he noted that one could get a stomachache from eating too much.

Giovanni told him, “I’m glad you have a sweet tooth because I brought you sweets from Sardinia.” The pope thanked him and suggested they share them with all the children. 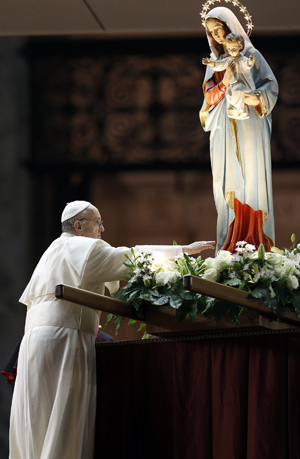 Pope Francis touches a statue of Mary during a Marian prayer service in St. Peter’s Square at the Vatican May 31. (CNS photo/Giampiero Sposito, Reuters)

The encounter ended with the singing of “Ave Maria” before Pope Francis went out to St. Peter’s Square to join tens of thousands of people for the recitation of the rosary at the end of May, a month especially dedicated to Mary.

Traditionally the May 31 rosary at the Vatican has involved a procession of Vatican employees and residents, praying and walking to the replica of the Lourdes grotto in the Vatican gardens. Popes John Paul II and Benedict XVI would join the crowd at the grotto at the end of the procession.

This year the Catholic public was encouraged to come to St. Peter’s Square for the recitation of the Marian prayer; Pope Francis had been scheduled to arrive only at the end to address participants, but instead was present from the beginning of the service.

Meditating on the Gospel story of Mary’s visitation to her cousin Elizabeth, Pope Francis said “listening, decision, action” mark Mary’s life, and also “indicate a path for us when asking the Lord for something.”

When the angel tells Mary that her cousin is pregnant, Mary doesn’t simply hear, she “listens,” which means she pays attention, accepts what is being said and is open to what God is asking of her, the pope said. “It’s not the distracted way we sometimes are before the Lord or others — hearing the words, but not really listening.”

Mary ponders the words of the angel, but only for a short time before she makes the decision to go visit Elizabeth, Pope Francis said. People can learn from Mary because “we often tend to put off making decisions, let others decide for us, preferring to be swept along by events or following the fashion of the moment; sometimes we know what we should do, but we don’t have the courage or it seems too difficult because it would mean going against the current.”

Even when people listen and know what they should do, he said, they don’t act “in haste” as Mary did to help people who need understanding, charity or “the most precious thing we have: Jesus and his Gospel.”

PREVIOUS: Hamas order would lead to the closing of two Catholic schools in Gaza

NEXT: Pope’s Sunday focuses on need for peace, gift of Eucharist