Pope’s Sunday focuses on need for peace, gift of Eucharist 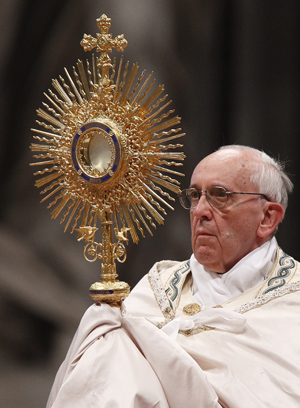 VATICAN CITY (CNS) — The horror of war, the valor of peacemaking and the gift of the Eucharist were on Pope Francis’ mind June 2, the day Italy celebrates its establishment as a republic and the day most dioceses around the world celebrated the feast of the Body and Blood of Christ.

Pope Francis began the day presiding at a Mass in the chapel of his residence, the Domus Sanctae Marthae, with the families of 24 Italian military personnel killed during peacekeeping missions in the past five years and with 13 members of the military injured during those missions, mostly in Afghanistan.

And, reciting the Angelus at noon with visitors gathered in St. Peter’s Square, Pope Francis appealed again for peace in Syria, which has been embroiled in violent conflict for more than two years as rebels try to oust President Bashar Assad.

Defenseless civilians, “who aspire for peace in justice and understanding,” have been struck particularly hard by “the conflict that has enflamed Syria for more than two years,” the pope said.

“This tormented situation of war brings tragic consequences with it: death, destruction, enormous economic and environmental damage, as well as the plague of kidnapping,” the pope said. Since February, the victims of kidnapping have included two Orthodox bishops, an Armenian Catholic and a Greek Orthodox priest; they have not been heard from since.

“I want to assure the persons kidnapped and their families of my prayers and solidarity, and I appeal to the humanity of the kidnappers to free their victims,” the pope said.

Pope Francis told the crowd gathered in St. Peter’s Square that earlier in the day he had celebrated Mass with the injured soldiers and the families of those “fallen in missions of peace, trying to promote reconciliation and peace in countries where much blood is being shed in wars that are always madness.”

During his homily at the Mass, attended also by the head of Italy’s military ordinariate and by Catholic military chaplains, Pope Francis told the injured and the family members of the dead, “Our God is the God of the great and the God of the small. Our God is personal,” listening to each person and loving them.

“Turn to us, O Lord, and have mercy on us because we are sad, we are distressed,” he prayed in the homily. “See our misery and our pain and forgive all sins, because behind every war there always are sins: the sin of idolatry, the sin of exploiting others on the altar of power, sacrificing them.”

“The madness that is war,” he said, is “the suicide of humanity, because it kills the heart, it kills precisely that which is the message of the Lord: It kills love.”

The celebration — the Vatican’s first attempt at a worldwide hour of eucharistic adoration with Catholics around the world gathering in cathedrals and parishes in almost every time zone — ended with Benediction.

Pope Francis did not give a homily or make other remarks during the prayer service in St. Peter’s Basilica. But, earlier in the day, during his Angelus address, he said the feast of the Body and Blood of Christ was an occasion “to be converted to faith in providence” and God’s ability to provide what people need, as well as being an occasion “to learn to share the little we are and have, and to never close ourselves off from others.”

(See the full text of the pope’s Angelus address.) 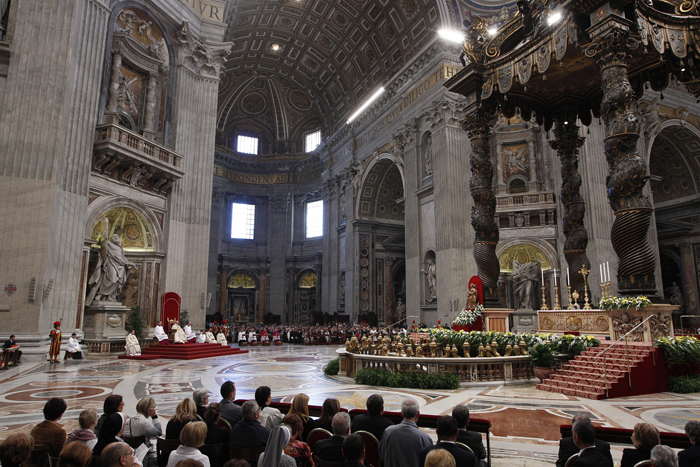