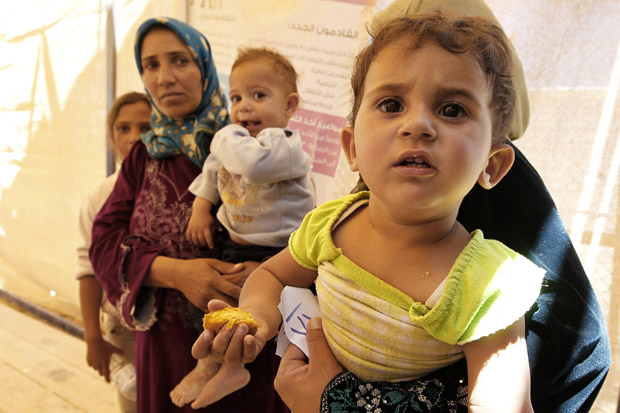 WASHINGTON (CNS) — Syrian refugees fleeing their homeland’s civil war deserve support from the international community in the form of food, water, shelter and education, said Bishop Gerald F. Kicanas, of Tucson, Ariz., chairman of the board of Catholic Relief Services.

In a nationwide webcast June 20, World Refugee Day, Bishop Kicanas also called upon governments to stop the shipment of arms to the Syrian government and rebel groups.

“It’s a situation that cries out for our response,” Bishop Kicanas said of the refugee crisis building daily in Syria’s neighbors, including Jordan, Lebanon and Turkey. “If people could be there and actually see face to face and firsthand, one couldn’t possibly be unmoved to see the suffering they (refugees) are enduring.

“The war simply has to end and hopefully the international community can move toward a political solution and can immediately end the violence.”

The bishop has visited Lebanon twice in recent months — in January and early June — to assess the situation and observe the work of Catholic Relief Services and Caritas Lebanon. He said he met with refugees, who are not staying in formal camps but are scattered in small tent communities throughout the small nation snuggled against the eastern edge of the Mediterranean Sea.

Humanitarian agencies estimate that at least 525,000 Syrians have fled to neighboring countries since violence erupted in March 2011. Joan Rosenhauer, executive vice president of U.S. operations for CRS, said during the webcast that the number of refugees is projected to reach 1 million by the end of the year.

“It’s quite remarkable that the Lebanese government and the Lebanese people have found ways to absorb and provide as best they can for this level of refugee crisis,” said Rosenhauer, who also recently visited the country.

The war also has claimed about 93,000 lives, according to the United Nations.

In a meeting with Lebanese President Michel Suleiman during one of his visits, Bishop Kicanas said the leader asked for broader assistance from the international community so that his country’s 4.2 million residents can accommodate the hundreds of thousands of refugees who have fled their homeland with little more than the clothes on their back.

“Lebanon is receiving about 5,000 refugees a day,” Bishop Kicanas said. “It’s a stress on public health and the educational system.”

Bishop Kicanas also referenced Pope Francis’ recent letter to the leaders of the Group of Eight nations, which concluded a two-day meeting in Northern Ireland June 18. In his letter, Pope Francis urged the G-8 leaders to seek a cease-fire and to bring all parties to the negotiating table.

The summit ended without agreement on a course of action other than to support plans for a Syria peace conference in Geneva to begin “as soon as possible.”

“Our Holy Father has called us to be attentive to the suffering that is going on and the need for all of us to contribute what we can to provide the humanitarian aid that is needed right now,” Bishop Kicanas said.

“This is a desperate situation and we need to respond.”

Stephen Colecchi, director of the U.S. bishops’ Office of International Justice and Peace, urged the nationwide audience to contact President Barack Obama and members of Congress to stress that the United States join other nations — particularly Russia with its close ties to Syrian President Bashar Assad — to bring all parties to the negotiating table to resolve their differences.

“We can tell our government that the decision to arm the rebels is a bad decision and the same for the Russians arming Assad. We need an arms embargo. That’s what the U.S. should be pursuing rather than arming one side or the other,” he said.

The webcast was sponsored by Catholics Confront Global Poverty, a joint program between CRS and the U.S. Conference of Catholic Bishops.

NEXT: Syrian priest killed during rebel attack on Franciscan convent