After acquittal, attention now on how to heal societal wounds of racism 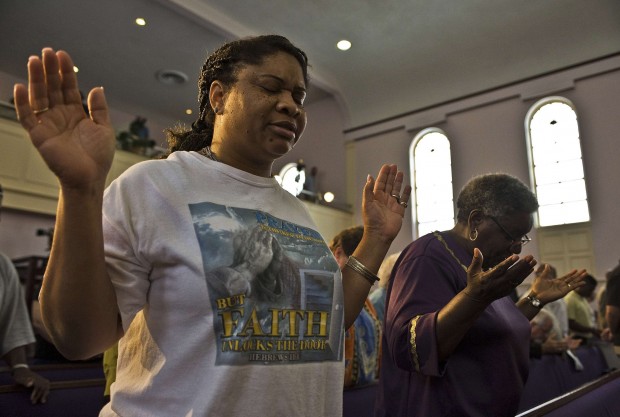 Women pray during a July 15 service at the New Life Word Center Church in Sanford, Fla., led by a coalition of local ministers in an effort to move the community past the George Zimmerman murder trial and verdict. (CNS photo/Steve Nesius, Reuters)

WASHINGTON (CNS) — Despite weeks of testimony and evidence and 17 months of national debate about what factors led to the shooting death of 17-year-old Trayvon Martin in Sanford, Fla., at the end of the trial July 13, it became apparent that broader issues would not go away with the verdict of acquittal.

George Zimmerman was acquitted of second-degree murder and manslaughter charges in the shooting death of Martin in February 2012, during a confrontation on a rainy night in the neighborhood where both lived.

But across the country, debate continued, not just over the legal outcome, but over what role race might have played in every step of the story. Even among people who didn’t disagree with the verdict of the six-woman jury, the outcome left many feeling unsettled about what the confrontation and Zimmerman’s exoneration mean about the country.

A history and black studies professor at Jesuit-run Fairfield University in Connecticut wrote in a column for a university publication, Fairfield Mirror, that the climate of anger, disappointment and fear, and accusations of racial profiling that continue after the Zimmerman verdict provide an opportunity for Catholic social teaching to be put into action.

Yohuru Williams, chair and professor of history and director of the Black Studies program at Fairfield, is an expert on the civil rights and black power movements whose own early education came in Catholic elementary and Jesuit secondary schools. He told Catholic News Service that even though he isn’t Catholic himself, the principles of Catholic social teaching infuse his classes, as they do much of what happens at Fairfield.

Whether people are upset about persistent racism, racial profiling, “stand your ground” laws or inequities of the criminal justice system, “people seem to coalesce around larger issues of equality and justice, the sanctity of human life and the need to address not only cultural misunderstandings but also the disparities in wealth that often drive them,” Williams wrote. “These problems, of course, are the very essence of the seven themes of Catholic social teaching.”

Those include the principles of: life and dignity of humans; call to family and community participation; care for the poor and vulnerable; and human solidarity, he said. “Catholic social teaching resonates in the Trayvon Martin case regardless of faith.”

“No matter what faith we are, these corporate faith values transcend what we do as a nation,” he told CNS in a phone interview. An appropriate first step for the church — Catholic, Protestant, any faith — would be to deal with the sense of grief that many people feel over Martin’s death and what has followed, he said.

One Catholic bishop said repairing the wounds which were brought to the fore for African-Americans, in particular, should start with an acknowledgement that racism continues to be a problem in the United States.

The bottom line, said retired Bishop John H. Ricard of Pensacola-Tallahassee, Fla., now president of the National Black Catholic Congress, is that “African-Americans see racism everywhere they look, and for most whites, racism simply does not exist.” Bishop Ricard is rector of St. Joseph’s Seminary, the Washington seminary of his order, the Josephites, who were founded to serve newly freed slaves in the United States and continue to minister in African-American communities.

But unless American society “comes to terms with these vastly different perspectives,” then the hurts felt by a whole segment of the country will continue for generations to come. “If we don’t talk we will lose this opportunity,” said Bishop Ricard. He said society made progress in this direction when churches supported the the civil rights struggles of the 1960s and interracial dialogue was actively pursued.

“Those dialogues changed minds and hearts,” he said. “But there doesn’t seem to be a place in the church these days to allow that to happen.”

In an earlier op-ed column about the Travyon Martin shooting published by the Connecticut Post, Williams described traumatic experiences when he believes he was targeted by police because of his black skin. In one case when he was a student at the Jesuits’ Fairfield Prep in Connecticut, he wrote, he was pulled over while on his way to work at a supermarket after school.

“After consenting to let the police search my van, I was made to sit on the curb still dressed in the shirt, tie and slacks required for Fairfield Prep students,” the article said. “I recall the bitter sting of being treated like a common criminal, as three units eventually responded to the scene, for doing something that I assumed was admirable for a 16-year-old — working.”

“Perhaps worse than the humiliation of being made to sit by the side of the road, as rush hour traffic whizzed by, was the policeman’s stern warning not to come back to Stratford after dark,” he wrote.

Even Attorney General Eric Holder July 16 told the annual convention of the National Association for the Advancement of Colored People in Orlando, Fla., not far from Sanford, that he knows all too well the kinds of conversations black parents have with their sons, just his father had with him, “about how, as a young black man, I should interact with the police, what to say and how to conduct myself if I was ever stopped or confronted in a way that I thought was unwarranted.”

Holder said he believes his father was certain that his parent’s generation “would be the last that had to worry about such things for their children.” Holder described being stopped by police on the New Jersey Turnpike “when I’m sure I wasn’t speeding,” and of being pulled over in Georgetown, a well-to-do area of Washington, “while simply running to catch a movie. … I was, at the time of that last incident, a federal prosecutor.”

In light of Martin’s death, Holder said he had a similar conversation with his 15-year-old son.

“This was a father-son tradition I hoped would not need to be handed down. But as a father who loves his son and who is more knowing in the ways of the world, I had to do this to protect my boy,” he said. “I am his father, and it is my responsibility, not to burden him with the baggage of eras long gone, but to make him aware of the world that he must still confront. …This is a sad reality in a nation that is changing for the better in so many ways.”

PREVIOUS: Clinic’s closure is ‘an answered prayer’ for pro-life demonstrators

NEXT: Catholic college heads appeal to Catholics in House on immigration