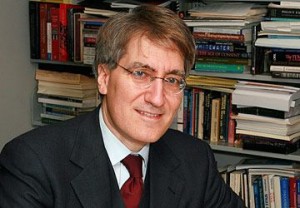 WASHINGTON (CNS) — Robert P. George, a Catholic legal scholar and ethicist who is the McCormick professor of jurisprudence at Princeton University, has been elected to head the U.S. Commission on International Religious Freedom.

He was appointed to the bipartisan commission in 2012 by House Speaker John Boehner of Ohio and is serving his first term as a commissioner.

“I have been honored to work alongside Professor George this past year in the struggle to guarantee religious freedom abroad for people of every faith and shade of belief,” Swett said in a July 23 statement announcing his election. “He is a true human rights champion whose compassion for victims of oppression and wisdom about international religious freedom shine through all we have accomplished this past year.”

George said in a statement he was “deeply honored that my colleagues have entrusted me with this position of leadership.”

He said he has “big shoes to fill,” calling Swett “a visionary leader who brings people together and empowers them in support of international religious freedom.”

The commission is an independent government agency charged with reviewing violations of religious freedom throughout the world and making appropriate policy recommendations to the president, secretary of state and Congress.

George added that he would do his best to live up to Swett’s “outstanding example” as the commission “works to ensure that the cause of religious freedom, understood in its most robust sense, is given the high priority it deserves in the formation and execution of U.S. foreign policy. While much has been accomplished, much remains to be done.

He was one of the drafters of 2009’s Manhattan Declaration, a joint statement of more than 140 Christian leaders, including 14 Catholic bishops, who pledged renewed zeal in protecting religious freedom as well as defending the unborn and upholding the traditional definition of marriage between one man and one woman.