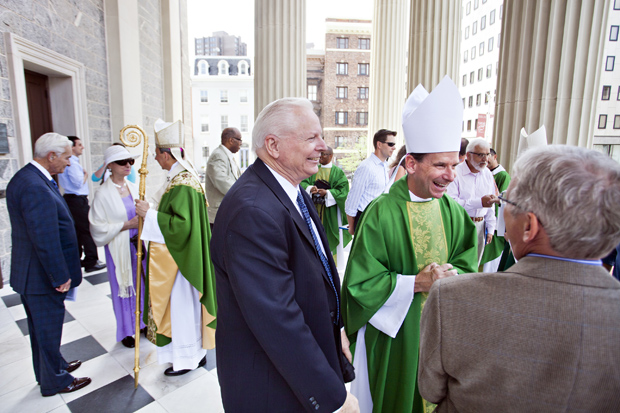 Cecil "Mel" Robeck, a professor of church history and ecumenics at Fuller Theological Seminary, and Bishop Michael F. Burbidge of Raleigh, N.C., co-chairs of a Vatican-sponsored Catholic-Pentecostal relations commission, talk with visiting members of the Pentecostal church who attended Mass celebrated by Baltimore Archbishop William E. Lori at the Basilica of the National Shrine of the Assumption of the Blessed Virgin Mary July 14. (CNS photo/Tom McCarthy Jr., Catholic Review)

BALTIMORE (CNS) — Seven Catholics and four Pentecostals met in Baltimore to focus on understanding their commonalities and differences.

The 11 church leaders attended the third session of the sixth phase of the international Catholic-Pentecostal dialogue, which began with Mass July 14 at the Basilica of the National Shrine of the Assumption of the Blessed Virgin Mary in Baltimore.

Discussions were to continue through July 19 at St. Mary’s Seminary and University.

“We identify an issue,” he said. “We seek where there may be common ground, we acknowledge honestly where there is disagreement, we ask each other sincere questions and we truly listen to the responses that are offered. All of this is rooted in prayer, a key component of the time we spend together.”

The dialogue, which began in 1972, brings together the Pentecostal Church and the Vatican-sponsored Pontifical Council for Promoting Christian Unity.

“Our Catholic tradition is highlighted in the Second Vatican Council, (which) encouraged dialogue,” said Bishop Burbidge, Catholic co-chairman of the dialogue. “It’s the prayer of Christ himself that there’s unity. We can only move toward that by learning from one another and that’s what a dialogue is — a respectful discussion and acknowledgement where there are and are not mutual points of understanding and willingness to learn from each other.”

The theme of the session was about healing: how spiritual healing takes place within our lives and what are the Pentecostal and Catholic understandings of healing, Bishop Burbidge said.

Discussions began July 14 after participants listened to two reports on papers about healing — one from a Catholic, another from a Pentecostal.

“We can ask clarifying questions about the paper and we can ask each other deeper questions so we leave this week ‘where do Catholics say the same thing as Pentecostals,'” Bishop Burbidge told The Catholic Review, newspaper of the Baltimore Archdiocese. “The dialogues have provided a better understanding of who we are. We (both) believe Jesus is Lord and savior. There are pretty strong common grounds there. We also believe we share the final ultimate goal — life with Christ forever.”

“We share a deep commitment to Jesus Christ,” said Cecil M. Robeck Jr., Pentecostal co-chairman of the dialogue, professor of church history and ecumenics and director of the David du Plessis Center for Christian Spirituality School of Theology at Fuller Theological Seminary in Pasadena, Calif.

“Ninety-five percent of what we believe is held in common,” he said. “We really need to be speaking when the world is encroaching upon the (Christian) church. Jesus is about reconciliation — that’s our message.”

Lowe is a reporter for The Catholic Review, newspaper of the Baltimore Archdiocese.