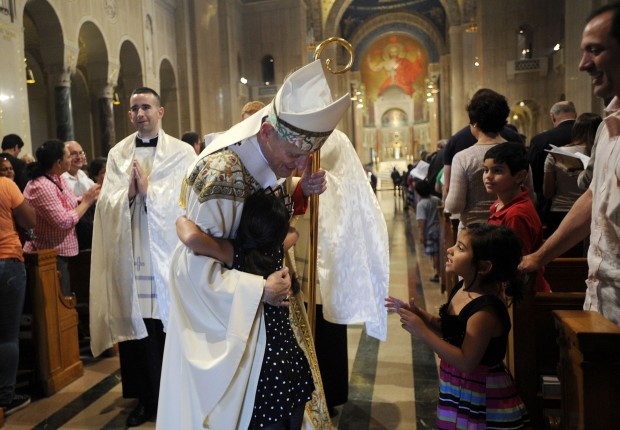 A young girl embraces Cardinal Donald W. Wuerl of Washington during the recessional of the Fortnight for Freedom closing Mass at the Basilica of the National Shrine of the Immaculate Conception in Washington July 4. (CNS photo/Leslie E. Kossoff)

WASHINGTON (CNS) — As people of faith and as Americans, the nation’s Catholics should kneel in prayer and also stand in defense of religious freedom, Washington Cardinal Donald W. Wuerl said July 4 during the closing Mass for the Fortnight for Freedom at the Basilica of the National Shrine of the Immaculate Conception in Washington.

The cardinal said that American Catholics, through their faith and love, can change the world and make it a better place. “It begins with all of us having the courage to stand for what we believe … (to stand up) for our faith and freedom.”

The Mass marked the close of the second annual Fortnight for Freedom, a two-week period in which the nation’s bishops called on Catholics across the country to pray and act in defense of religious freedom.

Dioceses across the U.S. celebrated Masses, held prayer services and organized marches and other events to mark the close of the fortnight, which began June 21, the vigil of the feast of Sts. Thomas More and John Fisher, who were martyred for their faith.

In Washington, the liturgy — televised nationally by EWTN — drew an overflow crowd of 5,500 people and was concelebrated by five bishops and by 72 priests. An honor guard of dozens of Knights of Columbus saluted the clergy as they processed into the Independence Day Mass.

People of all ages and backgrounds, ranging from families with young children to senior citizens, filled the pews and lined the outside aisles of the cavernous shrine.

In welcoming the congregation, Msgr. Walter R. Rossi, the basilica’s rector, praised the individual Catholics who had driven from different parts of the country and members of movements like the Neocatechumenal Way, some of whom came in buses and played joyful music outside the shrine’s entrance before the Mass. Their witness, Msgr. Rossi said, demonstrated that “faith matters.”

Baltimore Archbishop William E. Lori, chairman of the U.S. bishops’ Ad Hoc Committee for Religious Liberty who opened the fortnight with a Mass at his city’s historic basilica, was among the concelebrants for the July 4 Mass in Washington, and he spoke after Communion. He noted that the Supreme Court’s recent decisions on same-sex marriage, and the ongoing controversy over the federal contraceptive mandate, demonstrate real-life threats to religious liberty.

“We must stand firm and be emboldened by the strength of our religiously-held convictions not just two weeks a year, but always, for the threats continue to come,” Archbishop Lori said. “We defend marriage and defend religious liberty not for our own sake, but for the good of our church, for the good of our fellow man, and for the good of the United States of America.”

He said the Supreme Court’s decision the Defense of Marriage Act “effectively paves the way for more lawsuits to redefine marriage to include two persons of the same sex, and in doing so, raises the religious liberty stakes for the men and women of conscience and the religious institutions that continue to teach the truth about marriage.”

Archbishop Lori encouraged the nation’s Catholics not to be “unfairly shamed into remaining silent when it comes to supporting marriage.” He added, “We are not against anyone. … We are for marriage, we are for children, we are for families, and we are for preserving the religious liberty God has given us and our Constitution guarantees us as Americans who are also people of faith.”

Speaking about the HHS mandate that would force Catholic institutions like schools, hospitals and social service agencies to violate Church teaching by providing employee health insurance coverage for abortion inducing drugs, contraception and sterilizations, Archbishop Lori said, “Sometimes issues like a government mandate can seem abstract. But they affect real people and real ministries.” He encouraged people to go to the USCCB website at www.usccb.org and see a video about three women whose conscience rights have been violated in the medical field and in private business.

One day before the fortnight’s closing Mass, New York Cardinal Timothy M. Dolan, the president of the United States Conference of Catholic Bishops, said that the HHS final rule on its mandate requires action in Congress and in the courts. Numerous Catholic dioceses, institutions and private businesses are challenging the mandate in court.

In his homily, Cardinal Wuerl spoke about the nation’s legacy of religious freedom, and he noted how Maryland is regarded as the birthplace of religious liberty in the United States, because the colony was founded in 1634 on the principle of religious toleration. But by 1704, the royal governor there ordered a Catholic chapel in St. Mary’s City, then Maryland’s capital, to be locked, and until the American Revolution, Catholics there could not worship publicly and faced a variety of restrictions.

In 2009, the cardinal participated in a ceremony in which the doors of the rebuilt 1667 Brick Chapel in historic St. Mary’s City were unlocked, and he helped push open the doors.

That story, the cardinal said, demonstrates the fragility of religious freedom, and the need for people of faith, like the early Marylanders, to persevere in their defense of “our inherent human right to religious liberty and the blessing of freedom of conscience.”

Cardinal Wuerl noted how there are still efforts to lock the doors of people’s religious freedom, and he pointed to a case this past spring, when a small group of students tried to oust Father Greg Shaffer, the chaplain at George Washington University in the nation’s capital, because at Mass he taught “what Jesus said about marriage.”

Intolerance against people of faith “is the new form of locking doors,” the cardinal said. He encouraged Catholics not to respond in kind, but as followers of Jesus Christ, to speak the truth in love.

The intercessions at the Mass including a prayer for government officials to respect religious liberty, and a prayer for Catholics in educational, health care and social service ministries to have the freedom to carry out their work while remaining true to their faith.

After the Mass, people leaving the national shrine reflected on why they had come to Mass on July 4 to pray for religious freedom.

Juliana Anamelechi, a member of the Nigerian Catholic Community in Washington who works as a pharmacist at Providence Hospital in the nation’s capital, said: “Today is Independence Day. We want to pray for the country we’re living in … so our country will allow us to live a Catholic life, the way God wants us to live, without any hindrance from politics or a government mandate.”

NEXT: News of canonizations has ‘gladdened hearts’ of faithful, cardinal says