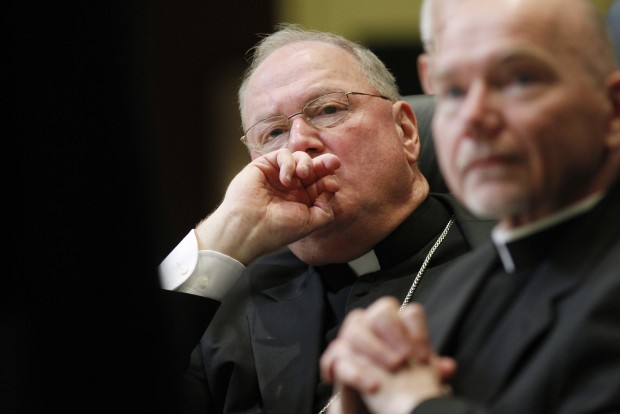 WASHINGTON (CNS) — The final rules issued by the U.S. Department of Health and Human Services implementing its mandate that employers provide coverage of contraceptives do not eliminate “the need to continue defending our rights in Congress and the courts,” said New York Cardinal Timothy M. Dolan in a July 3 statement.

The cardinal, president of the U.S. Conference of Catholic Bishops, noted that the bishops’ conference “has not completed its analysis of the final rule,” but he said “some basic elements of the final rule have already come into focus.”

He listed three concerns with the HHS final ruling issued June 28, which updates the proposed rules it issued in February and had left open for comment through April. He said his concerns were about the narrow definition of those “religious employers” exempt from contraceptive coverage requirement; the accommodation of religious ministries excluded from that definition; and the treatment of businesses run by people who seek to operate their companies according to religious principles.

HHS, which is headed by Secretary Kathleen Sebelius, acknowledged in its final rules that it had received many comments urging the agency to extend the exemption to include nonprofit secular employers and for-profit employers who have religious objections to providing contraceptive coverage. The mandate does not include a conscience clause for employers who object to such coverage on moral grounds.

Cardinal Dolan said the bishops are “concerned as pastors with the freedom of the church as a whole — not just for the full range of its institutional forms, but also for the faithful in their daily lives — to carry out the mission and ministry of Jesus Christ.”

The administration’s final rules also stipulated a separate accommodation for nonprofit religious organizations — including charities, hospitals and universities — that will not have to “contract, arrange, pay, or refer for contraceptive coverage” that they object to on religious grounds.

To qualify for the accommodation, organizations must self-certify as nonprofit religious group with religious objections to contraceptive coverage. These organizations must provide their health insurance companies with proof of their self-certification and insurance companies in turn would notify women in the health plan that contraceptive coverage would be provided separately and at no cost to them.

Cardinal Dolan said this accommodation “appears mostly the same, except for three relatively small changes that will require more time and analysis to evaluate.”

Regarding the rules’ narrow definition of religious employers and the lack of accommodation for religious business owners, the cardinal said there is little change in those areas since the proposed rules were first issued in February.

He noted that the bishops at that time expressed their concerns that the proposed rules “actually made matters more troubling by preventing dioceses and other exempt employers from extending their coverage to the employees of service ministries that are not exempt.”

He said the bishops also stressed that the proposed rules, like earlier versions, “made no provision at all for individuals and for-profit businesses.”

“Because the final rule remains the same in these areas, so do our concerns,” he said in the July 3 statement.

For insured plans, he said the proposed rules would have established separate insurance policies for coverage of sterilization, contraception, and abortifacients which the final rules do not.

“Now, there is only one policy, and it is the one sponsored by the Catholic employer. The objectionable items will still be paid for by virtue of the fact that an employee belongs to the Catholic employer’s plan, but these amounts are described as ‘payments’ rather than ‘coverage.'”

He also noted that the administration’s final rules propose to segregate funds in a way that was not specified in the proposed rules, which is something, he said, that “seems intended to strengthen the claim that objectionable items will not ultimately be paid by the employer’s premium dollars.”

He pointed out that the rules do not make it clear if the source of such funding is “genuinely separate from the objecting employer, and if so, whether it is workable to draw from that separate source.”

Regarding self-insured plans, the cardinal said the final rules treat the employer’s very act of objecting to coverage of sterilization, contraception and abortifacients as the legal authorization for a third-party administrator to secure the objectionable coverage, which the bishops objected to in comments submitted to the HHS on the proposed rules.

He said the bishops will “continue to examine the extent” to which the changes will force religious ministries to “violate their own teachings within their very own institutions.”

Cardinal Dolan said the USCCB “will have more to say when this aspect of our analysis is completed.”

He also reiterated the gratitude he expressed June 28 for HHS’ five-month extension before implementation of the rules, which threatens huge fines levied by the IRS for noncompliance.

NEXT: Catholics urged to speak truth ‘with love’ in religious freedom fight