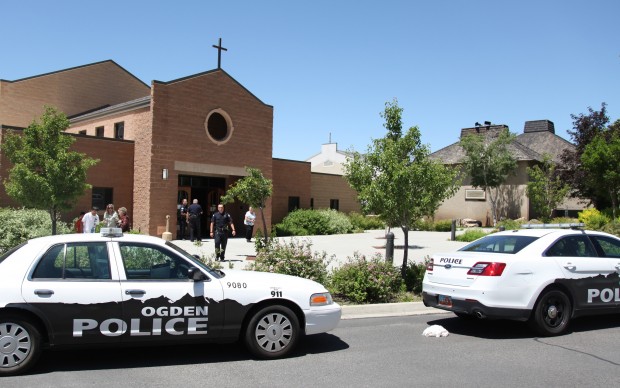 Police officers stand outside St. James the Just Church in Ogden, Utah, after a man was shot in the back of the head during Mass June 16. (CNS photo/Benjamin Zack, Standard-Examiner)

WASHINGTON (CNS) — Shootings in places of worship are fairly uncommon, but the public nature of churches, synagogues and temples sometimes makes them appealing targets for violent acts.

The federal government June 18 released its first guidelines for houses of worship confronted with a homicidal gunman. They were issued just two days after 66-year-old James Evans was shot by his 35-year-old son-in-law inside St. James the Just Catholic Church in Ogden, Utah.

“I felt violated,” Father Erik Richtsteig, pastor of St. James the Just, said in a recent telephone interview with Catholic News Service. “(The church) is a place where people should come to feel safe.”

In Utah, if an individual has a concealed firearm permit, he or she can bring a concealed weapon into a church unless the church itself prohibits firearms. The Utah Department of Public Safety’s website provides a list of those locations.

Father Richtsteig said he has no problem with this law. He noted that gun-free zones don’t make anyone safe.

“It’s not because of guns, it’s because of a man who made an evil decision,” Father Richtsteig said.

Addressing today’s violence and anger, Father Richtsteig said he does not think people are any angrier now than they were in the past.

“I think it’s that we’ve created a society in which people are expected to never have pain, they never expect to have reversal in their lives, they expect to have everything handed to them on a silver platter,” he said. “When they don’t get it, they act like spoiled children and they don’t experience consequences for their actions.”

Divorce or the breakdown of the family and bad child rearing can play a significant role. In Ogden, Jennings’ motive was not clear, but police had received domestic violence reports about him.

“People aren’t teaching their children to accept hearing ‘no’ and to treat other people with grace and compassion,” Father Richtsteig told CNS.

Consistent with the federal government’s guidelines, the priest said people must look less at how they can prevent inevitable violent incidents and more at how to prepare people to deal with them and respond in a safe manner.

“Tell people not to be paranoid but to plan for emergencies,” he said.

The release of the government guidelines came just after the six-month anniversary of the Dec. 14, 2012, mass shooting at Sandy Hook Elementary School in Newtown, Conn. Tragedies like Sandy Hook have triggered considerable public debate about gun laws and safety in the United States.

In April, the U.S. Senate struck down a plan to strengthen background checks on firearm sales as well as a proposal to ban some semi-automatic weapons resembling military assault weapons. Biden has said the executive branch is working to make gun control a priority for lawmakers again.

In a Dec. 21 statement about the Sandy Hook shooting, the chairmen of three U.S. bishops’ committees — domestic policy, communications, and marriage and family life — reiterated some of what the full body of bishops called for in a 2000 statement on crime and criminal justice. They called for measures that control the sale and use of firearms and make guns safer. The also urged sensible regulations of handguns and limited access to assault weapons.

With regard to confronting a church shooter, the guidelines said: “No single response fits all active shooter situations. … While (congregants) should follow the plan and any instructions given during an incident, they will often have to rely on their own judgment to decide which option will best protect lives.”

The suggested course of action is to “run, hide or fight.” This means leaving the building to seek shelter in a safe location or hiding and waiting for police to arrive. As a last resort, people should fight back in an attempt to stop the shooter.

The guidelines acknowledge that “while talking to the congregation and staff about confronting a shooter may be daunting and upsetting for some, they should know that they might be able to successfully take action to save lives.”

Dioceses across the nation have various precautions in place or are developing them to prepare for or respond to gun violence in churches.

“The safety of those in our care is of utmost importance and we regularly review our policies and procedures to help guard against and prepare for emergencies in our churches,” said Sean Caine, communications director for the Archdiocese of Baltimore. “We also coordinate with local law enforcement and emergency responders about how best to do this. For obvious reasons, we cannot share the details of our plans.”

Dianne Dunagan with the Office of Media Relations for the Archdiocese of Chicago said that several organized groups in the community play a large role in dealing with violence and promoting nonviolence in homes, on the streets and in neighborhoods.

“Their focus is directed at the root causes of violence and at the foundational blocks for building a nonviolent society,” Dunagan said.

Father Theodore Parker, pastor of St. Charles Lwanga Parish in Detroit, does not feel allowing guns in any church is a good idea. His parish has worked to prevent criminal activity and raise awareness about violence.

About three years ago, the parish council at his church was discussing problems in Detroit, focusing on violence. What resulted from the conversation was the parish deciding to have a gun buyback where people could exchange their guns for money, much of which was raised by parishioners. About 120 people sold their guns at the third and most recent buyback in August 2012.

“When we did the gun buyback, we had opposition from outside people saying, ‘We’ll give you more money than they’re giving you for your guns,'” he told CNS.

Father Parker said that while he feels guns are appropriate in rural settings for purposes such as hunting, urban settings are different.

“People are not hunting deer in the city,” he said. “People are hunting other people.”

Father Parker believes that the issue of gun violence has less to do with anger and more to do with the attitudes of society.

“I think our society has a lack of respect — for individuals and for institutions,” he said.

PREVIOUS: Patchwork of murky laws emerges as more states OK use of marijuana