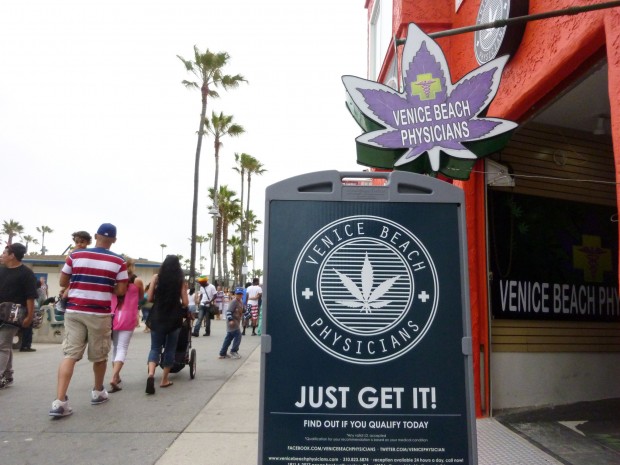 That’s the impression given by an omnipresent odor and abundance of Oceanfront medical marijuana dispensaries and one-stop “medical consultation” shops on the boardwalk — some outfitted with mini-ATM machines, leaf-shaped signage and playful sidewalk barkers dressed in green and welcoming passersby.

It has been more than a decade since California became the first state to allow legal medical marijuana sales in the U.S. and, although in conflict with an unmoving federal ban on marijuana sales, the state-by-state trend to legalize it has been on a fast track ever since.

“Legalization of marijuana is way down on the list here; we are ignoring it because it isn’t going anywhere in Pennsylvania,” said Robert O’Hara Jr., executive director of the Pennsylvania Catholic Conference and past president of the National Association of State Catholic Conference Directors. “I haven’t seen any buzz about it and see nothing in the foreseeable future although it may get hot.”

On a grass-roots level, the movement has supporters virtually everywhere, and nearly 20 states and the District of Columbia already allow legal medical marijuana consumption. In two of those states — Colorado and Washington — small amounts of “recreational” marijuana is now legal. Residents there will begin to see dispensaries selling pot and pot-infused products, edibles, sweets and beverages to people over 21.

The Catholic Church has largely stayed neutral in the debate, with church leaders focused on other battles related to religious liberty and efforts to legalize same-sex marriage, according to several Catholic theologians, policy advisers and academics, some of whom favor of marijuana’s potential health benefits in suitable cases and with controls.

“It would be pure speculation why there has been very little reaction, but usage is already so widespread that it came and went here with little attention,” said Greg Magnoni, spokesman for the Archdiocese of Seattle.

There are wide financial, medical, public policy and public welfare issues around legalizing what the federal government classifies as a controlled substance with no medical merits, including safeguards and regulations (or lack of) to limit abuses and unintended consequences such as enabling under-aged use.

The Washington law permits small-quantity sales of marijuana but prohibits public consumption (a frequently disregarded rule in many public places).

As with Colorado’s Amendment 64 that goes into full effect next Jan. 1, Washington’s marijuana sales will be taxed and accountable to the state but with lingering questions concerning risks of underage consumption, how to prevent re-sales, who qualifies as a medical patient, what constitutes driving under the influence and what the real impact will be on the drug’s lucrative black market and organized crime.

A handful of other states, including Illinois and Maryland, are the newest members to join the club with new or expanded legislation in play this year.

There is already talk of pot tourism to states where it’s legal and California is seeing environmental damage by reckless growers tapping into a gold rush of new pot farming.

In Washington, where the state Catholic conference did include an item in its fall 2012 public policy bulletin reminding local Catholics of the federal law concerning marijuana and that it will not permitted on parish property, Magnoni said plenty of people are already annoyed with increased pot smoking in public places. He added the new law may or may not lead to an upsurge in general usage.

“The church is generally concerned about that which is legal ‘becomes moral’ — as with legalized gambling and assisted suicide. It’s now hard to make a moral case to young people not to smoke pot if it’s legal,” Magnoni told Catholic News Service.

There is no question that legalization of marijuana is growing at a quick pace and that a sector of the public is moving marijuana use from the fringe to the mainstream with relatively strong public support and little comment from church communities, according to Sulpician Father Gerald D. Coleman, a California-based vice president for corporate ethics for the Daughters of Charity Health System.

The priest wrote a lengthy 2010 article outlining the debate when Californians were considering stepping up legalization there to include recreational use; the measure failed.

While excessive state and federal law enforcement resources have been spent fighting the war on drugs and while those efforts are thought to fuel gang violence in the U.S. and south of the border, Father Coleman argues there are important distinctions between decriminalization and legalization of marijuana. And even proponents of legalization will concede that California’s medical marijuana law is a poorly-designed, de-facto recreational-use model.

In Venice Beach, a $40 promotional walk-in consultation for shoulder pain, migraines or insomnia can mean same-day access to a patient ID card valid for one year. Future patients also look online for examination coupons and seasonal specials with participating doctors.

“Marijuana is being legalized not merely for medical reasons, but for pleasure,” Father Coleman told CNS, adding that the backbone of the legal advancement has to do with the critical moral issue of “basic human freedom,” the same argument used in the debates about abortion and physician-assisted suicide, he said.

“There is little to no discussion of this issue in Catholic health care,” he said, “and I would guess the reasons are that the major focus at the moment surrounds conscience protections, mergers and an increased pressure to maintain a Catholic health care presence in markets that sustain difficult challenges.”

The U.S. Conference of Catholic Bishops has taken no position in the debate on legal marijuana debate. Individual bishops have addressed the issue; in 2010 then-Bishop Salvatore J. Cordileone of Oakland argued against legalizing recreational use. It is up to state Catholic conferences to monitor and lobby for good state legislation.

“I don’t see why the church’s position on recreational marijuana should be any different than its position on beer, wine and liquor,” said Gerald Uelmen, criminal law professor at Jesuit-run Santa Clara University School of Law in San Jose.

“In terms of regulation, I think the state of Washington is on the right track by turning regulation over to the State Liquor Control Authority and regulating it just like alcohol,” Uelmen said.

Other states see little chance of legal marijuana becoming law at this time.

“I haven’t seen any buzz about it and see nothing in the foreseeable future although it may get hot.”