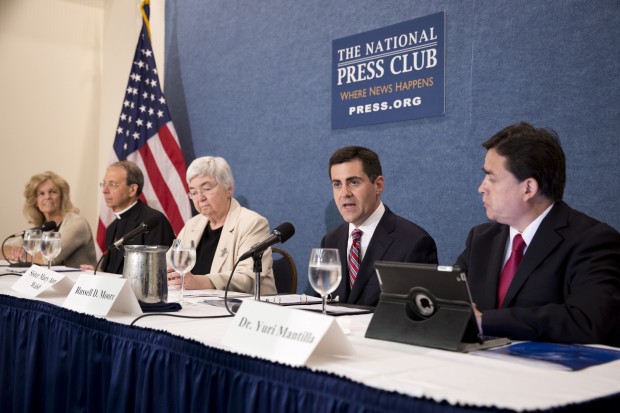 WASHINGTON (CNS) — A diverse group of religious leaders, including Catholics, Protestants, evangelicals and a representative from the International Society for Krishna Consciousness, issued an open letter July 2 urging the U.S. government to “expand conscience protections” in its Health and Human Services contraceptive mandate.

The letter, which said the country’s “delicate liberty of conscience is under threat,” called on HHS to provide conscience protections to “any organization or individual that has religious or moral objections to covering, providing or enabling access to the mandated drugs and services.”

The signers also asked Congress to “consider how it might prevent such offenses from occurring in the future,” noting that any policy “that falls short of affirming full religious freedom protection for all Americans is unacceptable.”

“Very simply, HHS is forcing Citizen A, against his or her moral convictions, to purchase a product for Citizen B. The HHS policy is coercive and puts the administration in the position of defining — or casting aside — religious doctrine. This should trouble every American,” said the letter, “Standing Together for Religious Freedom,” signed by 58 faith representatives.

The letter, “Standing Together for Religious Freedom,” was signed by 58 faith representatives and released during a news conference at the National Press Club in Washington.

Baltimore Archbishop William E. Lori, chairman of the U.S. bishops’ Ad Hoc Committee for Religious Liberty, was among the signatories and spoke about it at the afternoon news conference.

He said a key aspect that the Catholic Church is looking at in its “intense study” of HHS’ final rules issued June 28 is the three-tiered distinction the government made with religions: exempt houses of worship; the accommodated organizations; and private business owners with religious beliefs.

He told reporters that Catholics do not see a distinction between what people do in church and how they serve their neighbors or run a business. “The faith by which we worship on Sunday is the very same faith by which we act in the world the other six days of the week.”

Russell D. Moore, president of the Southern Baptist Convention’s Ethics & Religious Liberty Commission, also signed the letter and similarly stressed that people of faith “cannot accept” the government’s message that religion is just for our services “or what we hide in our hearts or sing in our hymns.”

Archbishop Lori stressed that those who signed the letter didn’t necessarily agree with Catholics about contraception or other issues but they “understand the core religious freedom issue at stake here.”

He told Catholic News Service he was grateful to be part of such a diverse group, noting that “it’s important for all of us to be vigilant for religious liberty.”

He also noted that it is a challenge to convey threats to religious liberty since “on the surface things look placid.” But he also pointed out that threats continue to emerge and that Catholics involved in grass-roots efforts by attending rallies, picnics and Masses focused on religious liberty are beginning to understand more about what’s at stake.

“Whether or not we agree with the particular conscientious objection is beside the point. HHS continues to deny many Americans the freedom to manifest their beliefs through practice and observance in their daily lives,” the letter says.

It adds that through the contraceptive mandate, HHS “continues to breach universal principles affirmed and protected by the U.S. Constitution and other federal laws.”

The signers said the mandate is a specific offense because it “represents a greater fundamental breach of conscience by the federal government.”

“Very simply, HHS is forcing Citizen A, against his or her moral convictions, to purchase a product for Citizen B. The HHS policy is coercive and puts the administration in the position of defining — or casting aside — religious doctrine. This should trouble every American,” it said.

When representatives from the letter’s signers were asked about the group’s next steps, Moore said: “We’re not going to back down.” He said the government assumed that Catholics and others who had issues with the contraceptive mandate would “somehow go away,” but he said that hasn’t happened and the religious leaders plan to “continue to speak about this.”