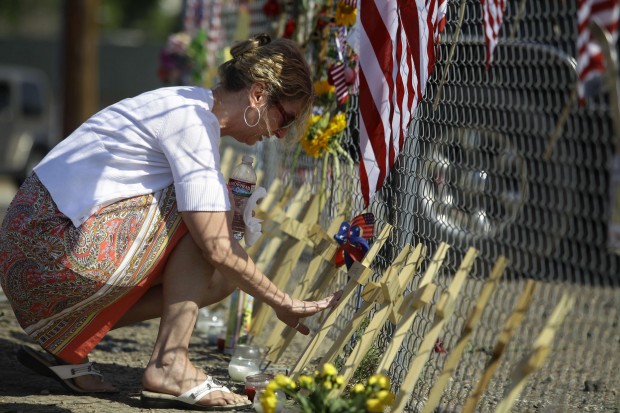 PHOENIX (CNS) — As the people of central Arizona mourned the deaths June 30 of 19 firefighters from the Granite Mountain Hotshots, hundreds of other firefighters battled the still-uncontrolled blaze that threatened the small towns of Yarnell and Peeples Valley.

The men from an elite firefighting crew based in Prescott, Ariz. — where they made up a significant portion of the city’s 92-employee fire department — were trapped when winds shifted, turning the fast-moving wildfire in their direction.

The 20th member of the crew survived because he was moving the team’s truck at the time, local authorities said.

Information on funerals had not been announced as of early July 2.

A planned congressional field hearing at a college gymnasium in Prescott was hastily turned into a memorial service July 2. Prescott Fire Chief Dan Fraijo was among those who talked about the great loss to the town and the wider world.

“Those families lost,” Fraijo said, according to The Associated Press. “The Prescott Fire Department lost. The city of Prescott lost. The state of Arizona and the nation lost.”

As of July 2, the fire had grown to 8,400 acres and the towns of Yarnell and Peeples Valley, home to a total of perhaps 1,000 people were both still evacuated. Two hundred or more structures were thought to have been destroyed, many of them homes.

Father Raul Lopez, parochial vicar of St. Mary Mediatrix Mission, the small Catholic quasi-parish in Yarnell, told the Catholic Sun, newspaper of the Diocese of Phoenix, that he’s sure his parishioners are “very anxious at this moment.”

He said he believed the fire had not approached the St. Marys’ property yet, but the status of a mission church was unknown. He said the Shrine of St. Joseph is located along Highway 89, just before the town’s main commerce area. Some maps showed fire damage close to the town center.

The highway leading to both churches remained closed.

Father Lopez was emotional about the 19 firefighters who were killed.

In Tualatin, Ore., members of Resurrection Parish and Our Lady of the Lake School in Lake Oswego were remembering John Percin Jr., a firefighter whose family remains in the parish.

Percin, 24, was remembered for his athletic ability and for participating in multiple sports. He graduated from West Linn High in 2007.

“Johnny was a very, very good athlete,” said Mark Neil, a member of Resurrection who coached Percin in CYO grade school basketball. “He was very competitive and very coachable.”

Percin was not tall, but was strong, fast and skilled. “You knew when it came to crunch time, you wanted the ball in John’s hands,” Neil said.

The former coach said he has always had a “special spot” in his heart for Percin, his older brother and their parents, John and Mary. “At these small Catholic schools, other families become an extension of your own,” he told the Catholic Sentinel, newspaper of the Archdiocese of Portland, Ore.

The family released a statement saying: “John was a brave and courageous man who never hesitated to put others before himself. He was loved by many, and he will always be remembered. He is an inspiration to us all. Our thoughts and prayers go out to all of his fallen brothers and their families.”

NEXT: Patchwork of murky laws emerges as more states OK use of marijuana