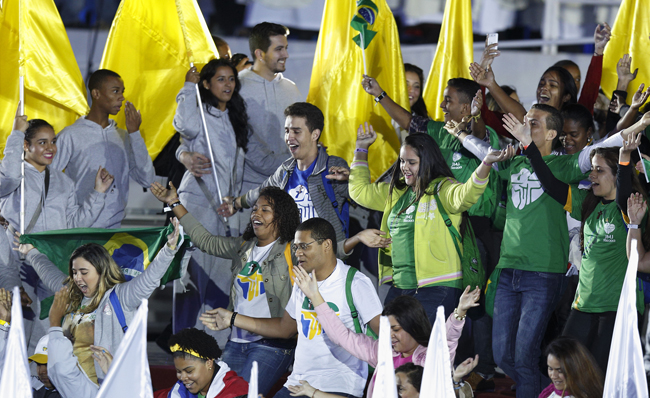 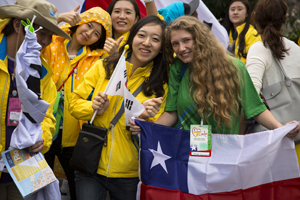 RIO DE JANEIRO (CNS) — The mosaic of hundreds of national flags waving in the cold wind on Copacabana beach was symbolic, as pilgrims from all backgrounds, driven by a single faith, participated in the opening Mass for World Youth Day.

“We come from different cultures, speak different languages, but we sing the same songs and have the same faith,” said Nancy Issa of Ramallah, West Bank. Issa and 20 other Palestinians came to Brazil for the July 23-28 events.

“This week Rio becomes the center of the church, alive and young,” he said. “These youths’ enthusiasm show the face of the young Catholics. … I celebrate for all those who believe that a new world is possible.”

Police said more than 400,000 pilgrims braved the rain to gather on the beach. Some reacted with joy and tears when young people made their way up on the main stage carrying the Pilgrim’s Cross.

“Emotions are very high,” said Jose Leonardo Chacin, 27, an accountant from Maracaibo, Venezuela. “Especially since the pope is Latin American.”

At the beginning of his speech, Archbishop Tempesta remembered retired Pope Benedict XVI, responsible for choosing the city to host World Youth Day 2013. He later highlighted the importance of this first foreign trip by Pope Francis. 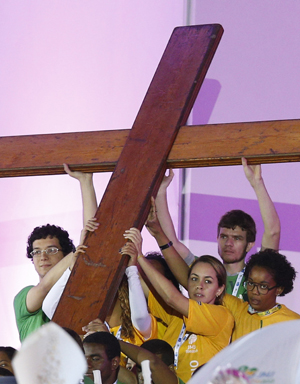 “This World Youth Day was destined to be … the first apostolic trip of the first Latin American pope in history,” said the archbishop.

In the crowd, thousands of Argentines cheered. Nearby, a small group of Canadians were ecstatic with the whole celebration.

“This is so great. The enthusiasm, the passion, it is all incredible,” said J.P. Martelino, 18, of St. Patrick Parish in Vancouver, British Columbia. When asked what he would take from the week, Martelino replied, “Definitely the energy. … I will take that to Canada with me and try to reproduce it so it may attract more young people to church.”

After the Mass, the rain started to pick up, and slowly the pilgrims headed home. Tired and cold, many still smiled, telling Catholic News Service that this had been a great first day.

“I believe that World Youth Day is similar to going to Mecca for Muslims,” said Chacin. “Every Catholic, no matter what age, should do it at least once in his or her lifetime.”