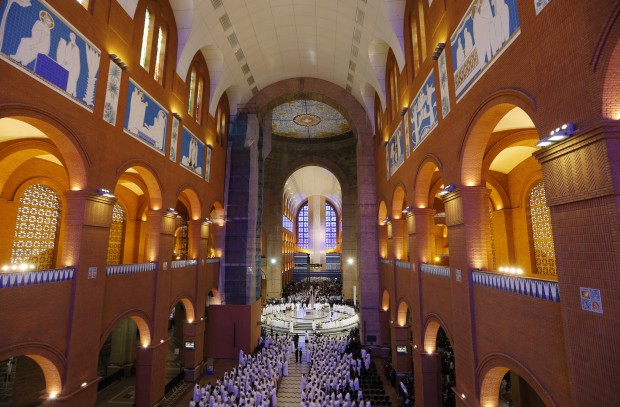 Pope Francis celebrates Mass at Brazil's Basilica of the National Shrine of Our Lady of Aparecida July 24. (CNS photo/Paul Haring)

APARECIDA, Brazil (CNS) — Comfortable in the presence of Mary and at a shrine that symbolizes one of his most important experiences as a member of the Latin American bishops’ council, Pope Francis kicked off five days of intense activity with an act of devotion.

Visiting the Basilica of the National Shrine of Our Lady of Aparecida July 24, the pope entrusted World Youth Day to Mary’s maternal protection, but also challenged parents, priests and other adult Catholics to give the young people things that the world, with all its wealth, cannot: faith and values.

The pope began his homily during Mass at the world’s largest Marian shrine by recalling the month he spent in Aparecida in 2007 as part of the Latin American bishops’ council, CELAM, and his role as head of the committee that drafted the gathering’s final document on evangelizing the continent anew.

Pope Francis said the thousands of lay Catholics who continued to come to the shrine each day to pay homage to Mary and ask her help during the meeting served as a witness to the bishops and helped them with their work.

“The Aparecida document was born of this interplay between the labors of the bishops and the simple faith of the pilgrims,” he said.

Tens of thousands of pilgrims had gathered in the rain outside the shrine, hoping for a glimpse of the pope, who traveled most of the way by plane instead of helicopter because of the weather.

As soon as the pope arrived, he greeted the superior of the Redemptorist community that staffs the shrine, then he got into the popemobile to greet the crowd and kiss babies.

Before Mass, Pope Francis prayed before the image of Our Lady of Aparecida, a dark wooden sculpture that was caught in the nets of three local fishermen in 1717. One of the men kept the statue in his home for 15 years as neighbors, then people from farther away, came to consider it an object of devotion. A chapel was built to house the statue in 1734, and work on the first basilica began in 1834. In 1929, Pope Pius XI declared Our Lady of Aparecida the “queen and patron of Brazil.” 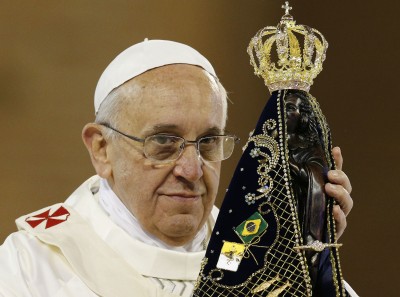 Pope Francis asked Mary to aid him in fulfilling his responsibilities as pope and formally entrusted to her the hundreds of thousands of young people from around the world who were gathering in Rio for World Youth Day.

In his homily at Mass inside the basilica, Pope Francis said that before beginning his heavy schedule of World Youth Day activities, he wanted to “knock on the door of the house of Mary.”

Pope Francis said he would entrust to Mary the success of World Youth Day, and he prayed that “she may help all of us, pastors of God’s people, parents and educators, to pass on to our young people the values that can help them build a nation and a world which are more just, united and fraternal.”

Hope is one key to that future, he said, even in the face of difficulties and the reality of evil.

“Always know in your hearts that God is by your side; he never abandons you,” Pope Francis said. “Let us never lose hope. Let us never allow it to die in our hearts.”

Referring to the Mass reading from the Book of Revelation and its description of a dragon pursuing a woman and wanting to devour her child, Pope Francis said, “the dragon, evil, is present in our history, but it does not have the upper hand.”

Pope Francis said all people, including the young, are attracted by a variety of “false idols” that seem to promise hope and happiness, things like “money, success, power, pleasure.”

While it is tempting to be pessimistic and worry that faith cannot possibly compete with the flashy attractions of the world, the pope told the people that they must be confident, trusting in God and in the goodness that lies in each human heart.

“Let us encourage the generosity which is typical of the young and help them to work actively in building a better world,” he said.

“Young people are a powerful engine for the church and for society,” the pope said. “They do not need material things alone; also and above all, they need to have held up to them those nonmaterial values which are the spiritual heart of a people, the memory of a people.”

The values they need to see and learn, he said, are “spirituality, generosity, solidarity, perseverance, fraternity (and) joy.”

Like the fishermen who found in the nets the body of the Marian statue, then the head, then an abundance of fish, Christians need to be ready to be surprised by God, the pope said. “Even in the midst of difficulties, God acts and he surprises us.”

The Gospel reading at Mass was the story of the wedding feast at Cana, where Jesus turned water into the finest of wine.

“God always saves the best for us, but he asks us to let ourselves be surprised by his love, to accept his surprises,” the pope said. “If we draw near to him, if we stay with him, what seems to be cold water, difficulty, sin, is changed into the new wine of friendship with him.”

Finally, the pope said, Christians must be people of joy, who share their happiness and confidence with others.

“Christians are joyful, they are never gloomy,” he said. “Christians cannot be pessimists. They do not look like someone in constant mourning.”