At Rio hospital, pope offers drug addicts an embrace and a challenge 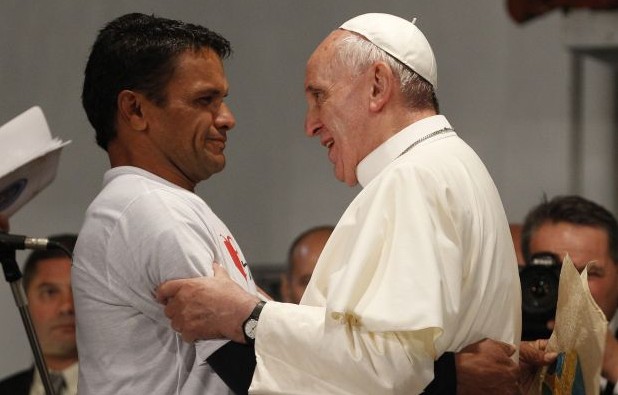 RIO DE JANEIRO (CNS) — Pope Francis addressed a group of recovering drug addicts in a working-class neighborhood of Rio, offering them a message of compassion and hope as well as a call to self-determination.

At the Hospital of St. Francis of Assisi, which he called a “shrine of human suffering,” he told patients they were the “flesh of Christ,” like the leper embraced by the institution’s patron saint in a crucial step toward his conversion. He also said those struggling with drug dependency deserve the “closeness, affection and love” of all society.

Yet the pope also stressed the necessity of personal will in recovering from addiction.

“To embrace someone is not enough,” Pope Francis said July 24. “We must hold the hand of the one in need, of the one who has fallen into the darkness of dependency perhaps without even knowing how, and we must say to him or her: ‘You can get up, you can stand up. It is difficult, but it is possible if you want to.’

“Dear friends, I wish to say to each of you, but especially to all those others who have not had the courage to embark on our journey: ‘You have to want to stand up; this is the indispensable condition!'”

The pope arrived at the hospital a little after 6:20 p.m., and was greeted by patients, family members and hospital staff packed into one of the hospital’s courtyards. The audience was ebullient despite the rain, and Pope Francis spent nearly an hour milling through the crowd, then listening to several speeches, including two by recovering addicts. Clamoring pilgrims with ponchos and umbrellas took pictures and reached out to touch the pope as he walked among them.

The pope’s speech, delivered in Portuguese, also addressed the social, political and economic ramifications of drug abuse. He denounced the “scourge of drug-trafficking that favors violence and sows the seeds of suffering and death,” and called traffickers “dealers of death,” who “follow the logic of money and power at any cost.”

The pope said that the answer to drug addiction was not a “liberalization of drug use, as is currently being proposed in various parts of Latin America,” but solutions to the “problems underlying the use of these drugs.”

Such solutions, Pope Francis said, include “promoting greater justice, educating young people in the values that build up life in society, accompanying those in difficulty and giving them hope for the future.”

The pope praised the hospital, which is operated by the Fraternity of St. Francis of the Providence of God, as a place where the “parable of the good Samaritan is made tangible. Here there is no indifference, but concern. There is no apathy, but love.”

During his visit, Pope Francis inaugurated a new wing of the hospital especially dedicated to treating users of crack cocaine, who represent 3 percent of the population of Brazil, according to the World Health Organization statistics cited by the hospital. The city of Rio estimates there are 6,000 crack users in the city alone.

Sabrina Vasco, a psychologist and human resources coordinator for the hospital, wore a clown nose — sometimes used for therapy — for the papal visit. She told Catholic News Service the pope’s visit “will have an immediate therapeutic effect, both on these patients as well as their families.”

Contributing to this story was Lise Alves.

NEXT: Final WYD events relocated because of rain, mud