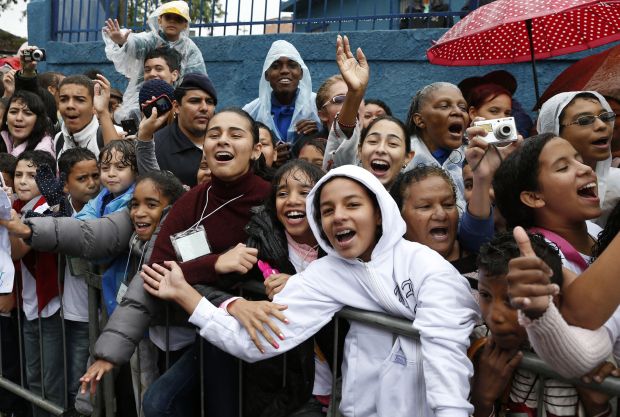 People react as Pope Francis arrives for a visit in the Varginha slum in Rio de Janeiro July 25, during his weeklong visit to Brazil for World Youth Day. (CNS photo/Paul Haring)

RIO DE JANEIRO (CNS) — Visiting one of this city’s notorious “favelas,” or slums, Pope Francis denounced corruption and a “culture of selfishness and individualism,” and called for a “culture of solidarity” in pursuit of social justice.

While stressing the need to alleviate material suffering, he also said that “real human development” requires the promotion of moral values, to satisfy a “deeper hunger, the hunger for a happiness that only God can satisfy.”

The July 25 speech was the pope’s first major statement on social and economic questions during his visit to Brazil, a country that has enjoyed years of strong economic growth but is currently in turmoil over widespread dissatisfaction with government policies.

The pope arrived at the Rio neighborhood of Varginha just before 11 a.m. and began his visit with a short ceremony in the small neighborhood chapel, where he blessed the altar before a congregation of more than 100 people.

Afterward, Pope Francis walked through the city’s streets, apparently indifferent to the rain, stopping often to greet many of those crowding tightly around him. Loud cheers accompanied him as residents reached out for his hand or to take his photo with their cell phones. At one point, the pope entered a resident’s house, festooned with balloons in the yellow and white colors of the Vatican flag. He spent 15 minutes inside and, according to the Vatican spokesman, he greeted more than 20 people of all ages packed into a small room.

After more than half an hour, the pope stepped onto a stage overlooking the neighborhood soccer field, where more than 20,000 people had gathered from Varginha and surrounding neighborhoods. One resident, Rangler dos Santos Irineu, formally greeted the pope with a speech in which he noted that Varginha had received new street lighting and newly paved roads in the weeks prior to the papal visit. 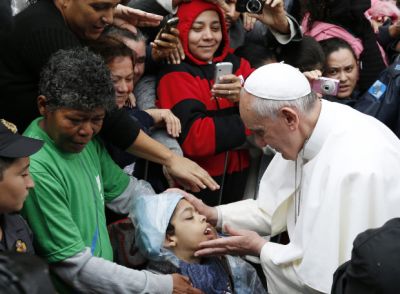 In his own speech, Pope Francis thanked residents for their hospitality and said they and other Brazilians could “offer the world a valuable lesson in solidarity, a word that is too often forgotten or silenced, because it is uncomfortable.”

Turning to address a wider audience, the pope urged the world’s wealthy, public officials and “all people of good will who are working for social justice” to “never tire of working for a more just world” and greater equality.

In a likely allusion to anti-government protests in Brazilian cities since early June, the pope said young people “have a particular sensitivity toward injustice” and are “often disappointed by facts that speak of corruption on the part of people who put their own interests before the common good.”

He urged those opposing injustice and corruption not to “yield to discouragement”: “Do not lose trust, do not allow your hope to be extinguished. … Do not grow accustomed to evil, but defeat it.”

Echoing a famous revolutionary slogan, Pope Francis said “everybody, according to his or her particular opportunities and responsibilities, should be able to make a personal contribution to putting an end to so many social injustices.”

But the pope added that giving “bread to the hungry,” while required by justice, is not enough for human happiness.

“There is neither real promotion of the common good nor real human development when there is ignorance of the fundamental pillars that govern a nation, its nonmaterial goods,” he said.

The pope identified those goods as life; family; “integral education, which cannot be reduced to the mere transmission of information for the purposes of generating profit”; health, “including the spiritual dimension” of well-being; and security, which he said can be achieved “only by changing human hearts.”

Pope Francis suggested that he appreciated the ambitious anti-poverty policies of the government under President Dilma Rousseff and her predecessor, Luiz Inacio Lula da Silva, commending the “efforts that Brazilian society is making to integrate all its members, including those who suffer most and are in greatest need, through the fight against hunger and deprivation.”

But using a term associated with the government’s policy of rehabilitating neighborhoods like Varginha by removing drug traffickers and other criminals, Pope Francis said “no amount of ‘pacification’ will be able to last, nor will harmony and happiness be attained in a society that ignores, pushes to the margins or excludes a part of itself.”

NEXT: At Rio hospital, pope offers drug addicts an embrace and a challenge