Be generous givers of mercy, not condemnation, disapproval, pope says 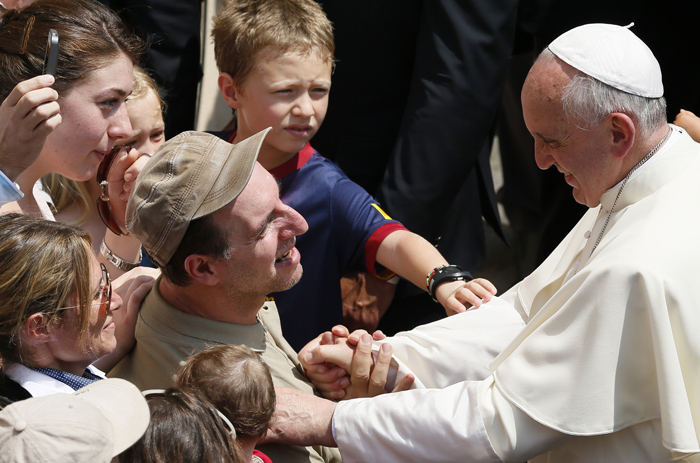 CASTEL GANDOLFO, Italy (CNS) — God wants people to be generous and merciful, not full of condemnation toward others, Pope Francis said.

God is well aware of “our miseries, our difficulties, even our sins, and he gives all of us this merciful heart,” capable of being loving and merciful toward others, he told pilgrims gathered outside the papal summer villa.

“God always wants this: mercy, and not (people) going around condemning everyone,” he said July 14 before praying the Angelus.

(See the full text of the Pope’s Angelus address.)

While most popes spend a portion of the hot Roman summer at the papal residence in Castel Gandolfo for vacation, Pope Francis continues to reside at the Vatican.

However, he said he wanted to spend a day visiting the people of this hilltop town as well as the Vatican staff who work at the papal villa to thank them for their service.

“My thoughts go to Blessed John Paul II and Benedict XVI, who loved spending part of the summer period in this pontifical residence,” he told the employees as well as Bishop Marcello Semeraro of Albano and Milvia Monachesi, the town’s mayor.

The pope encouraged everyone to hold on to their memories of meeting and helping his predecessors, asking that they take to heart the popes’ witness and let it encourage them to be faithful to Christ, the Gospel and church teaching.

Some 55 people work at the papal villa, about half of whom are gardeners and farmers who take care of the papal cows, chickens, bees and orchards, which produce milk, eggs, honey, olive oil, fruits and vegetables for use and sale at the Vatican.

After meeting with the villa staff and local authorities in the morning, the pope prayed the Angelus with thousands of pilgrims and visitors packed outside the papal villa in the town’s main square and on the side streets. Rather than giving his address from the villa’s balcony, Pope Francis addressed the crowd at street level from the open front door of the villa.

Referring to the day’s Gospel reading — the story of the good Samaritan — the pope encouraged everyone to be “good and generous” like the man in Jesus’ parable, and “put into practice the will of God, who wants mercy more than sacrifices” and burned offerings.

The pope urged doctors, nurses and healthcare workers to live out the same spirit of the Good Samaritan and of their patron saint, St. Camillus de Lellis. July 14 was the feast day of the saint, who founded the Camillians, an order dedicated to caring for the sick, and marked the beginning of a yearlong celebration of the 400th anniversary of his death.

Pope Francis also congratulated the Diocese of Albano, which planned to celebrate the feast day of St. Bonaventure, its patron saint, July 15.

The pope said he hoped people would have a wonderful celebration and said, “I would love to send you a cake, but I don’t know if they can make one big enough.”

He also reminded people he was leaving for World Youth Day in Rio de Janeiro in a week’s time. As people clapped and cheered enthusiastically, the pope said: “I see there are lots of young people here, but there are also many who are young at heart. Very good!”

The pope then joined a small group of his fellow Jesuits for a private lunch at the Vatican Observatory’s headquarters located in the villa’s gardens.

The group of Jesuit astronomers, led by Argentine Father Jose Funes, showed the pope around the headquarters, including its meteorite laboratory.

The pope “used a microscope to study a piece of the San Carlos meteorite, which fell near Buenos Aires,” the staff tweeted on its @VaticanObserv account.

The community was “greatly moved” by the pope’s visit, it tweeted, and said that during lunch they told the pope about their current projects.

“At the end of his visit, Pope Francis added his autograph to a parchment with signatures from all the popes who have visited the observatory,” it tweeted.