VATICAN CITY (CNS) — Pope Francis has approved a major updating of the criminal laws of Vatican City State, including in areas dealing with child abuse and terrorism financing, and has ruled that any Vatican employee can be tried by the Vatican court for violating those laws.

The laws were adopted by the Pontifical Commission for Vatican City State and were made applicable to all Vatican employees around the world — for example, Vatican ambassadors serving abroad — in a document signed by Pope Francis July 11.

The amendments to the Vatican’s criminal code and code for criminal procedures go into effect Sept. 1 and bring Vatican law into detailed compliance with several international treaties the Vatican has signed over the past 30 years as well as with developments in international law.

The changes include the abolition of life imprisonment. The maximum penalty under the new Vatican code is 35 years.

Giuseppe Dalla Torre, the presiding judge of the Vatican City court, said the change reflects a growing consensus among criminologists that life imprisonment is an “inhumane and useless” punishment, as well as the Vatican’s view that prison sentences must be motivated by a desire to rehabilitate, rather than simply punish a criminal. 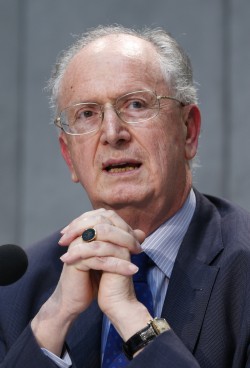 Dalla Torre told reporters that the new laws, in compliance with the Vatican’s signing and ratifying the 1989 Convention on the Rights of the Child, define and set out penalties for specific crimes against minors, including the sale of children, child prostitution, the military recruitment of children, sexual violence against children and producing or possessing child pornography.

Previously, he said, those specific crimes would have been dealt with under more generic laws against the mistreatment of minors. The bulk of the Vatican’s criminal code is based on an 1889 version of Italy’s criminal code and did not, for example, contemplate the crime of child pornography, Dalla Torre said.

The changes to Vatican City civil law are separate from the universally applicable canon law, norms and sanctions, which require bishops around the world to turn over to the Congregation for the Doctrine of the Faith cases of priests accused of child sexual abuse or possession of child pornography. The canonical penalties include the possibility of the priest being expelled from the priesthood.

Those accused also face criminal prosecution in the country where the abuse occurred. Under the changes made by Pope Francis, if the priest is a direct employee of the Holy See — working in a Vatican office or nunciature — he also could face a criminal trial at the Vatican.

By specifying the crimes, Dalla Torre said, the new Vatican laws make it much easier for the Vatican to cooperate with other governments and even extradite a person who committed the crime elsewhere, but was trying to hide in the Vatican.

Facilitating international cooperation and the possibility of extradition also explains why the new laws include crimes against the security of airports, maritime navigation or oil-drilling platforms, even though the Vatican has no airport, ships or fixed platforms in the sea.

In his document expanding the jurisdiction of the Vatican City legal system to all Holy See employees, Pope Francis wrote: “In our times, the common good is increasingly threatened by transnational organized crime, the improper use of the markets and of the economy, as well as by terrorism.”

The international community, of which the Vatican is a part, he said, needs to “adopt adequate legal instruments to prevent and counter criminal activities by promoting international judicial cooperation on criminal matters.”

For the Vatican, he said, the international treaties “are effective means to prevent criminal activities that threaten human dignity, the common good and peace.”

Jesuit Father Federico Lombardi, Vatican spokesman, said more changes to Vatican laws and procedures are in the works, specifically those dealing with how money is handled and how financial transactions are monitored.

The changes, he said, will respond to suggestions and criticisms made by Moneyval — the Council of Europe’s Committee of Experts on the Evaluation of Anti-Money Laundering Measures and the Financing of Terrorism.

Dalla Torre, who presided over the trial last year of Paolo Gabriele, Pope Benedict’s butler, said Gabriele’s theft and leaking of confidential papal correspondence led to one change in Vatican law: explicitly outlawing “crimes committed against the security, fundamental interests or patrimony of the Holy See.” Since those offenses were not crimes under the old law, Gabriele was tried and convicted on charges of aggravated theft.

NEXT: Be generous givers of mercy, not condemnation, disapproval, pope says