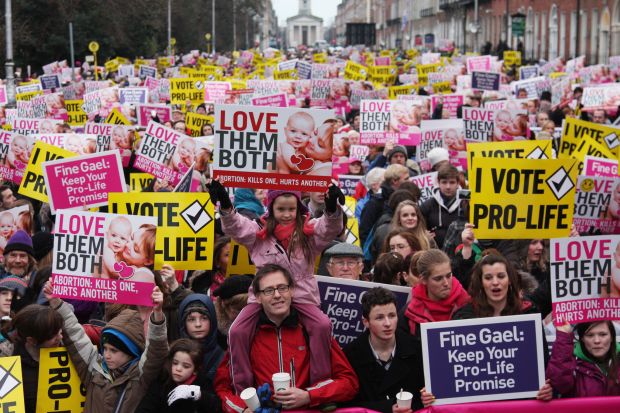 More than 25,000 people gather for a pro-life vigil outside the Irish parliament in Dublin Jan. 19. (CNS photo/John Mc Elroy)

A day earlier, the president exercised his constitutional prerogative by calling a meeting of the Council of State to advise on whether he should sign the law or refer it to the country’s Supreme Court to test the constitutionality of the bill.

However, a spokesman for the president confirmed that he signed the law July 30, just a day before he was legally obliged to either sign it or send it to the Supreme Court.

The Pro-Life Campaign said the passage of the abortion bill into law “is a very sad day for our country.”

The law will permit abortions when there is a substantial risk to the life of the mother, including when a woman says the continuation of the pregnancy leads to suicidal thoughts. It would also provide for jail terms of up to 14 years for those performing abortions in circumstances other than permitted by the new law.

Caroline Simons, legal adviser to the Pro-Life Campaign, told Catholic News Service that the law “for the first time in our history makes it legal to deliberately target the life of an innocent human being.”

She dismissed claims by Prime Minister Enda Kenny that the law is about saving women’s lives.

“The new law is life-ending, not life-saving,” Simons said.

She insisted that “the government brought forward this law in the full knowledge that abortion is not a treatment for suicidal feelings and ignored all the peer-reviewed evidence showing that abortion has adverse mental health consequences for women.”

Simons said pro-lifers would work for “the repeal of this unjust law. We will give very careful consideration in the coming weeks on the best way to bring this about.”

Referring to recent rallies against the legislation, Simons said: “The pro-life movement is mobilized and growing. We have seen the biggest ever gatherings of pro-life people in recent weeks.”

While the law will now be enacted, the president’s decision not to refer the proposals to the Supreme Court makes it possible for citizens to challenge the legislation before the courts. If the president had referred the law and it was found to be constitutional, no further legal challenges would have been possible.

In practice, abortion has been illegal in Ireland under legislation enacted in 1861. A 1983 constitutional amendment created an equal right to life between the mother and unborn baby.

However, a 1992 Supreme Court judgment — known as the X case — found that there is a constitutional right to abortion where there is a substantial risk to the life of the mother, including the risk of suicide, up to birth.

Church leaders and pro-life campaigners had urged the government to hold a constitutional referendum to overturn the 1992 Supreme Court decision. However, Kenny decided to bring forward the current law instead.

Under the law, the procedures for assessing the risk to the life of the mother differ depending on the woman’s condition. One doctor will be able to make a decision on whether to terminate a pregnancy in an emergency situation in which a mother’s life is in danger.

Where there is risk of loss of a woman’s life from physical illness, but where the situation is not an emergency and suicide intent is not a factor, two doctors will be needed to make the decision. However, in cases of suicide intent, the suicidal woman will be interviewed by a panel of three doctors, two psychiatrists and one obstetrician, who must agree unanimously.