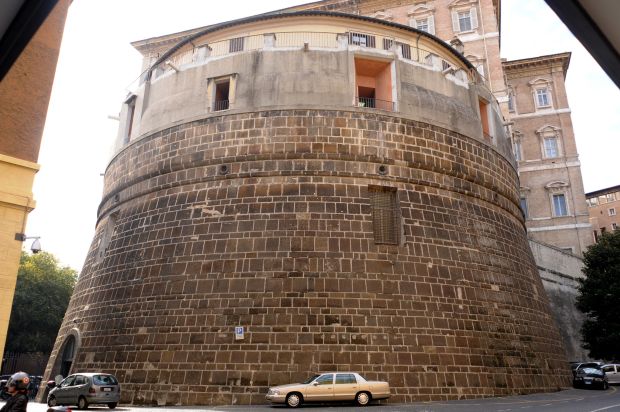 The Institute for the Works of Religion, popularly known as the Vatican bank, is seen in a 2009 photo. (CNS photo/L'Osservatore Romano via Catholic Press Photo)

VATICAN CITY (CNS) — In an effort to shake its image as a secretive, scandal-ridden institute and improve its relationship with the media, the Vatican bank has launched its own website.

“It is an important part of transparency to launch a website,” said Ernst von Freyberg, president of the Vatican bank.

The site for the bank — formally known as the Institute for the Works of Religion — went live July 31 at ior.va.

Having an online presence is meant “to tell our customers, the church, the interested public what we are doing, how our reform efforts are progressing and what the scope of our work is,” he told Vatican Radio.

But it’s also a way for the bank to try to facilitate relations with the press, which has given extensive coverage of the bank’s woes and less to its campaign to clean up.

The website, published in English and Italian, lists a number of contacts — including two people dedicated to press inquiries — complete with direct phone lines, street addresses and emails.

Von Freyberg told Vatican Radio, “We consider journalists and the media our key intermediaries with the public, but also with those in the church who are interested in our work. 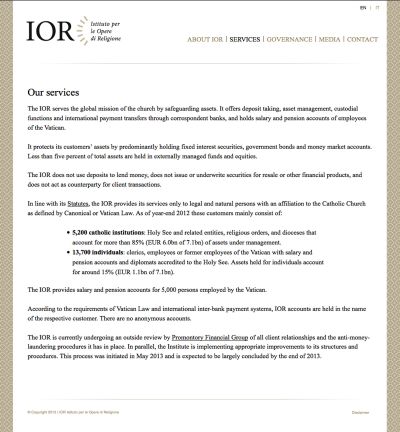 “We hope that this website will also create a platform to communicate with journalists and the media,” he said.

The launch comes at a time of both continued upheaval at the bank and beefed-up reforms.

The bank’s director and deputy director both resigned July 1 after a prelate, who was an account holder, was arrested by Italian authorities in June on charges of fraud, corruption and slander. In 2010, Italian treasury police seized 23 million euros that the Vatican bank had deposited in a Rome bank account, but later released the funds when the Vatican’s new financial laws went into effect.

The new laws were the start of Pope Benedict XVI’s sweeping reforms to get the Vatican’s finance and money-handling laws to comply with European laws and international standards. Pope Francis is continuing those reforms and appointed a special commission to review the activities and mission of the Vatican bank.

Von Freyberg told Vatican Radio that the Vatican bank has been working hard in recent weeks to get the institute to be “transparent, efficient and completely compliant” with current regulations and standards.

“We wish to create options for the Holy Father to decide later in this year how he wishes to organize our activities going forward,” he said.

“Whatever it ends up being — whether a bank or a charitable fund — transparency and honesty are essential,” the pope said.

The website’s five pages explain what the Institute for the Works of Religion is and provide numerous links to its governing statutes and policies.

It provides a breakdown of financial figures from 2011 and 2012. It said the bank manages 6.3 billion euros ($8.4 billion) in third-party assets, 0.8 billion in equity and brought in a profit of 86.6 million euros last year from investments.

Because it does not lend money or issue or underwrite securities or other financial products, the institute does not consider itself to be a bank.

The institute concentrates on safeguarding others’ assets and deposits and facilitates international payment transfers for its 13,700 individual account holders and 5,200 Catholic institutions, such as dioceses and religious orders.

The website lists the names of those in charge of the bank’s governance and oversight; its history; its latest reform efforts as well as a media section that links to important documents, news reports from Vatican Radio and press releases from the Vatican press hall.

One of the links will be the bank’s annual report — the first time one will be released to the public — sometime in October.

NEXT: Pope, with fellow Jesuits, prays for ‘grace of shame,’ humility