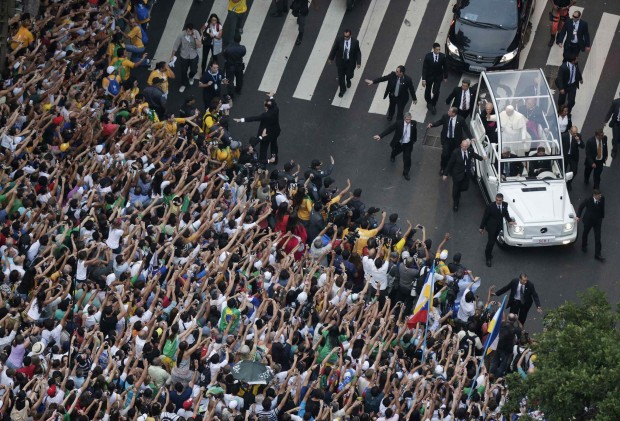 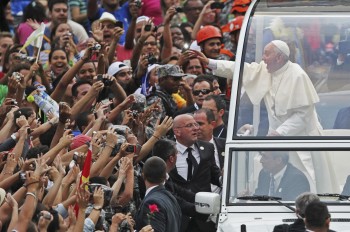 RIO DE JANEIRO (CNS) — Pope Francis returned to his native Latin America July 22, asking for open hearts, even after the irrepressible crowds made it clear he had them.

The 76-year-old pope’s first international trip involved a 12-hour flight from Rome, taking him back to the continent he left more than four months ago to attend the conclave that elected him pope.

After quick greetings at Rio’s international airport, then an often chaotic 45-minute ride into the city and a more orderly 25-minute circuit of downtown in an open popemobile, the pope flew by military helicopter to Guanabara Palace, the office of the governor of Rio de Janeiro state. There he met with Brazilian President Dilma Rousseff and other leaders.

In his remarks there, delivered in a mixture of Portuguese and Spanish, the pope borrowed a phrase from the Acts of the Apostles: “I have neither silver nor gold, but I bring with me the most precious thing given to me: Jesus Christ!”

The way to reach the Brazilian people is through the heart, he said, “so let me knock gently at this door. I ask permission to come in and spend this week with you.”

Pope Francis said he had come to Brazil, the country with most Catholics in the world, to “give an account of the reasons for the hope” that comes from faith in Jesus and inspire them to “offer everyone the inexhaustible riches of his love.”

The pope did not refer or allude to the mass protests that broke out last month in Brazilian cities against a range of grievances, including government corruption, unsatisfactory public education and health services, the high cost of public transportation and police brutality. Those demonstrations, driven largely by social media and largely populated by younger Brazilians, have dragged Rousseff’s approval ratings to record lows.

In her remarks, Rousseff noted that her government was facing “new challenges — the demonstrations by people who are protesting against some government decisions, which are a sign that they want and expect more.”

Acknowledging the hundreds of thousands of young Catholics gathered in the city for World Youth Day, the pope said they need space, which they find in Christ, since “there is no more powerful force than the one released from the hearts of young people when they have been conquered by the experience of friendship with him.” 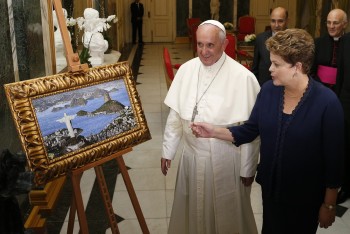 Pope Francis and Brazil’s President Dilma Rousseff look at a painting of the Christ the Redeemer Statue during a welcome ceremony at the Guanabara Palace in Rio de Janeiro July 22. (CNS photo/Paul Haring)

Parents and other adults have an obligation to ensure they give the young the support, tools and space they need to develop their potential, he said.

The young need “a solid basis on which to build their lives,” Pope Francis said. They need safety, education and “lasting values that make life worth living.”

Pope Francis said he and members of his generation also must give the young “the legacy of a world worthy of human life” and learn “how to awaken in them their greatest potential as builders of their own destiny, sharing responsibility for the future of everyone.”

He ended his speech referring again to the statue of Christ the Redeemer overlooking the city and said, “The arms of the pope now spread to embrace all of Brazil in its human, cultural and religious complexity and richness.”

After the speeches and plenty of time greeting representatives of the national, state and city governments and presenting the members of his entourage, Pope Francis entered the Guanabara Palace for a private meeting with Rousseff, with the governor of Rio de Janeiro state and with the city’s mayor.

The welcoming ceremony and meetings were the only published events on the pope’s schedule for the day. He was to spend the night, and the entire next day, resting at the archbishop’s Sumare Residence on a hill above the city.