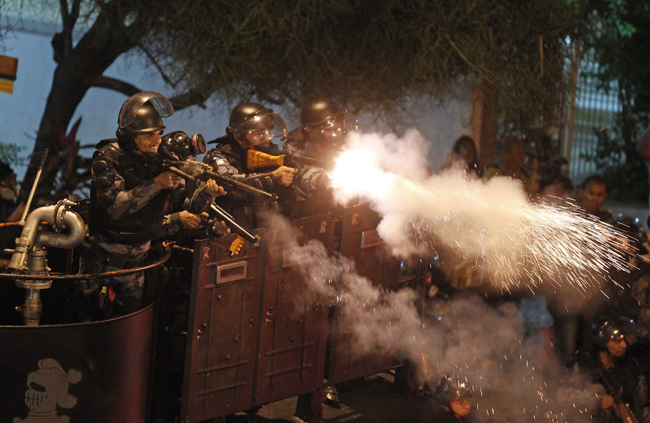 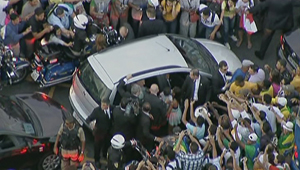 The car carrying Pope Francis is mobbed by people as it gets stuck in traffic as he is driven from the airport to the Metropolitan Cathedral in Rio de Janeiro, in this July 22 still image taken from video. The pope is making his first international trip, joining more than 300,000 young people from around t he globe for World Youth Day. (CNS photo/video pool via Reuters)

RIO DE JANEIRO (CNS) — The dream of trying to see Pope Francis up close ended at a police barricade for 74-year-old Odaleia Bastos.

“I don’t understand why we can’t get closer,” she said as she argued with police officers. “The population will protect the pope,” she kept telling them.

Bastos, like many residents of Rio’s Laranjeiras neighborhood, had hoped to see the pope as he entered the Guanabara Palace, the governor’s official residence, for his first official event in the city. Instead, she and hundreds of well-wishers were met with police security forces and riot police.

Maria Amelia Salvadore, 64, said she was disappointed but understood the security measures in place.

“I understand that they have to keep protesters away, but these young people are not protesting the pope, they are protesting against the politicians who are inside the palace waiting to meet the pontiff,” she told Catholic News Service.

Simone de Souza Slutzky said she though Pope Francis would probably support the movements that have shaken up many Brazilian cities over the summer.

“A sign that he is ‘with the people’ is the fact that the first contact in Brazil was with the population, not with the politicians,” she said. “That shows that he cares more about the people than he does about government officials.”

Salvadore said Brazilian politicians would do well to follow the pope’s humble examples.

“Our officials do not need palaces to live in, they should follow Pope Francis’ example … live a simple life,” she said.

By 6 p.m., the crowd of well-wishers had dissipated, making room for a rowdy group of protesters. The protesters started out peaceful, chanting anti-government slogans and lifting up signs calling for social changes in Rio.

“We are not against the pope’s visit,” said Francisco Magalhaes, 33, “but against corruption and this current government.”

“We did not go to the Municipal Theatre,” added Arianne Santos, 26. “Instead we came here, where the politicians are meeting the pope, to protest.”

At a press briefing that evening, the Vatican press spokesman, Jesuit Father Federico Lombardi, said Brazilian authorities decided to transport Pope Francis to the palace to avoid some of the protesters.

As the crowd got rowdier, protesters started to throw smoke bombs toward the barricades.

“We are here to demand better education and health,” said a 19-year-old student with an Anonymous mask who did not want to give out his name. John, as he asked to be called, carried a sign that said: “Pope, we apologize, but we are restructuring Brazil. Nothing against you, this is about the neglect seen in our country.”

Video editor Daniel Garcia, 33, told CNS that he was there just to warn the pope that he was meeting with crooks.

“I just want him to know who he is meeting with inside the palace,” he said, holding up a sign with his message.

As the minutes passed the crowd, estimated by police at 1,500, got angrier. Fire was set to a dummy, and fights started to break out between groups. A little farther back, CNS found urban studies professor Luciana Andrade and doctoral student Helena Galiza from Rio’s Federal University observing the unrest.

“We support the movement. Their demands are reasonable,” said Galiza.

The two women said protesting during the pope’s visit is one way to get international attention to the plight of those being removed from their homes so that the area can be used to build new stadiums and parking lots.

World Youth Day volunteer Cecilia Elmallian, from Uruguay, did not seem too concerned with the protests.

“They have the right to protest, and I don’t believe they (protests) are against the pope,” she said as she headed out of the crowd. “I have been here for a while, with my WYD backpack, and have not been harassed once. They (protesters) seem to be OK with the (pope’s) visit.”

By 8 p.m. violence from both sides had led to several injuries and the arrest of five protesters. Two hours later barricades had been lifted, and the neighborhood was once again calm.

PREVIOUS: Pope says he returns to Latin America as witness of Christian love