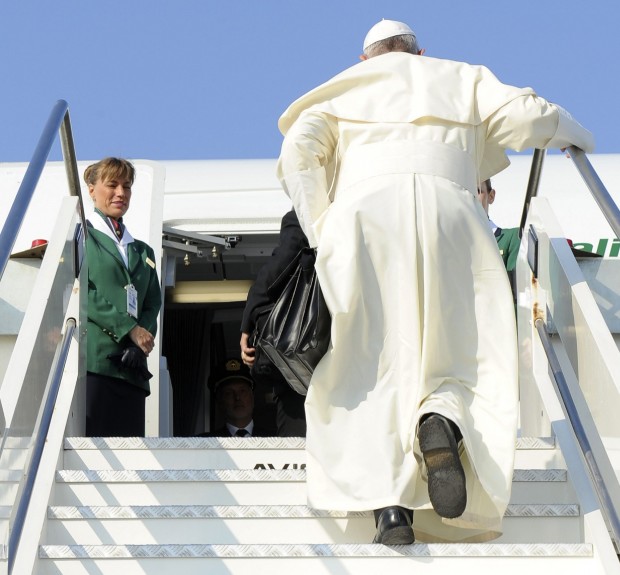 Pope Francis carries a bag as he boards a plane at Fiumicino airport in Rome July 22. (CNS photo/L'Osservatore Romano via Reuters)

ABOARD THE PAPAL FLIGHT TO BRAZIL (CNS) — With economic hard times as an excuse not to hire young people, the world risks tossing them aside and endangers its own future, Pope Francis said.

Speaking to reporters aboard the papal flight to Rio de Janeiro July 22, the pope declined to answer their questions, but instead made very brief remarks about his July 22-29 trip and then greeted each of the 71 media members.

A Mexican veteran of papal trips, speaking on behalf of the journalists, welcomed the pope to the back of the plane on his first foreign trip, acknowledging the pope’s reputation for keeping reporters at a distance.

Pope Francis said it was strange to hear her interpretation that reporters “aren’t the saints I’m most devoted to” and that by entering the media section of the plane he was entering “the lion’s den.”

“It’s true I don’t give interviews. I don’t know why. I just can’t. It’s tiresome,” he said. “But I enjoy your company.”

Turning to World Youth Day, the purpose of his trip, Pope Francis said he did not want the event to be a meeting with young people “in isolation,” because “when we isolate them we do them an injustice. They belong to a family, a country, a culture and faith.”

While it is true that young people are the future, he said, they are not the only keys to a healthy future for a society, nation or the world.

The young “are the future because they are strong,” the 76-year-old pope said, but the aged are essential too, “because they have the wisdom of life.”

“Sometimes we are unjust to the aged; we set them aside as if they have nothing to give,” he said. “But they have the wisdom of life, history of our homelands and families that we need.”

Pope Francis told reporters he knows that in many countries the economic crisis has been hardest on young people and young families.

“I read last week how many of the young are without work, and I think we run the risk of creating a generation that has never worked,” he said.

The long-term lack of a job is detrimental, he said, because “work is dignity to the person (and) the ability to earn one’s bread.”

Once again decrying what he describes as “a throwaway culture,” Pope Francis said “we do it often with the aged and now, with this crisis, we are doing the same with the young.”

What the world needs and what Pope Francis had said he hoped to demonstrate in Brazil is “a culture of inclusion and encounter” to make sure everyone’s place and potential contribution to society is welcomed.

Telling the journalists that he noticed that they weren’t as “ferocious” as he had feared, the pope asked them to “help me by collaborating for the good of society, the young and the aged.”

World Youth Day obviously has been on the pope’s mind for weeks, but in the three days before leaving Rome it was clear the trip and the young people he would meet were a priority for him.

He visited retired Pope Benedict XVI July 19, asking him to accompany the journey with his prayers.

Then July 20 he made an unannounced visit to Rome’s Basilica of St. Mary Major, spending more than half an hour in private prayer and entrusting the young people to Mary.

The basilica was open to the public at the time, so when he was done praying the pope went to the main altar and addressed the stunned crowd. He asked people to accompany his trip and his meetings with the young people with “prayer, trust and penance.”

He recited the Angelus prayer at noon July 21 with visitors who were gathered in St. Peter’s Square. He thanked the people who had brought a large banner with the words “Buon viaggio” and again asked people to accompany World Youth Day with their prayers.

“All those going to Rio want to hear the voice of Jesus, to listen to Jesus,” the pope said. They want to ask, “Lord Jesus, what must I do with my life? What is the path for me?”

Pope Francis’ @Pontifex Twitter account also took a decidedly WYD turn the three days before he left, telling those already in Rio he was looking forward to seeing them, praying for a safe journey for those heading toward Rio, and July 21 offering prayers that those unable to make the trip would still be a part of it through prayer.

NEXT: Crowds in Rio welcome pope, who wanted to be ‘close to the people’