Crowds in Rio welcome pope, who wanted to be ‘close to the people’ 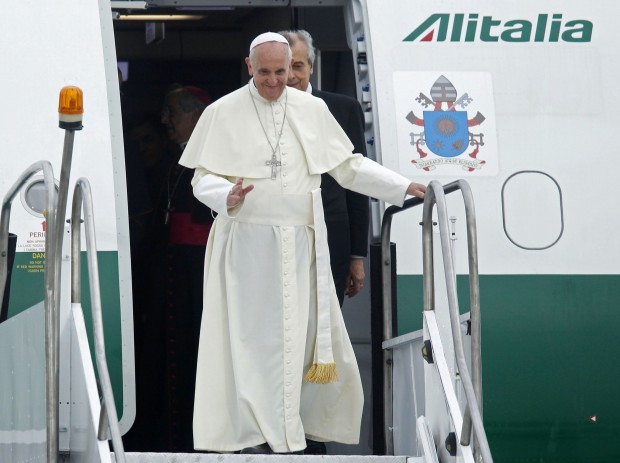 RIO DE JANEIRO (CNS) — Hundreds of thousands of cheering people welcomed Pope Francis to Brazil July 22 as he made the first international trip of his pontificate to his native region of Latin America.

Just days before the trip, Pope Francis made the decision to circulate through downtown Rio de Janeiro so, as Rio Archbishop Orani Tempesta said, the pope could be “close to the people.”

The papal plane touched down at Rio’s Galateo-Antonio Carlos Jobim International Airport at 3:43 p.m. local time, and he emerged 18 minutes later to cheers from a relatively small group, which included a children’s choir.

After exchanging greetings with Brazilian President Dilma Rousseff and other dignitaries for 15 minutes, the pope entered a compact Brazilian-made Fiat Idea for the ride downtown, accompanied by security vehicles and helicopters overhead.

At some points, the motorcade was separated from ordinary rush-hour commuters by nothing more than a median strip. As the pope’s car drew closer to the center, he passed increasingly large groups of people standing, cheering and waving. About 20 minutes into the ride, clusters of people began pressing against the vehicle, reaching out to touch the pope, and had to be pushed away by the security detail. At one point the press of crowds brought the vehicle briefly to a standstill, and the pope emerged to kiss a baby.

Apparently attempting to avoid the crowds, the motorcade turned into a stretch of ordinary traffic. Shortly thereafter, the papal car found itself repeatedly stuck between vehicles and crowds. Security officers could be seen vigorously pushing back bystanders who reached out to touch the pope.

The government has provided heightened security for the papal visit, with more than 28,000 police officers assigned to the week of events, which culminate in the celebrations of World Youth Day.

As the pope toured the city, Brazilian television reported that on the morning of July 21 police found a homemade bomb inside a bathroom at the sanctuary of Our Lady of Aparecida, which the pope was scheduled to visit July 24.

NEXT: State of religious freedom in Pakistan considered ‘dire’