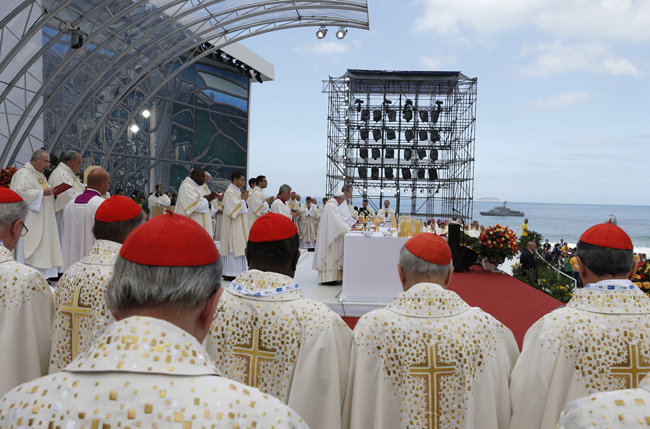 RIO DE JANEIRO (CNS) — Reducing the faith to a worldly ideology, prizing administrative efficiency over missionary zeal, and exalting the role of clergy to the detriment of the laity are some of the major “temptations” undermining evangelization in Latin America, Pope Francis told church leaders from the region.

“The decision for missionary discipleship will encounter temptation,” the pope said July 28 at a meeting with the coordinating committee of the Latin American bishops’ conference, CELAM. “It is important to know where the evil spirit is afoot in order to aid our discernment.”

Pope Francis spoke with forceful words on the role of bishops, instructing them to lead without being authoritarian, to adopt “simplicity and austerity of life” and to care for their dioceses without ambitions for more prominent appointments.

“The bishop has to be among his people in three ways,” the pope said. “In front of them, pointing the way; among them, keeping them together and preventing them from being scattered; and behind them, ensuring that no one is left behind, but also, and primarily, so that the flock itself can sniff out new paths.”

In his four-page speech, Pope Francis spoke with frequent reference to the 2007 CELAM conference in Aparecida, Brazil, where, as Cardinal Jorge Mario Bergoglio, he played a major role in producing the meeting’s final document, which called for a “continental mission” in Latin America and the Caribbean.

Noting that “we are lagging somewhat” in pursuing Aparecida’s goals, he identified as a major hindrance a tendency to “interpret the Gospel apart from the Gospel itself and apart from the church,” for instance through the lens of free-market capitalism or Marxism.

The pope said other common distortions of the faith include turning it into psychological therapy or esoteric spirituality, or emphasizing “outdated manners and forms which, even on a cultural level, are no longer meaningful.”

Pope Francis also warned against a “functionalism” that “reduces the reality of the church to the structure of an NGO (nongovernmental organization),” where “what counts are quantifiable results and statistics,” and efficiency takes precedence over mystery.

This temptation can arise, he said, when the church becomes self-centered and forgets that it is supposed to be a “bride, mother and servant, a facilitator of faith and not an inspector of faith.”

A related danger, the pope indicated, is that of clericalism, or making the ordained ministry of bishops, priests and deacons the standard and the model for the mission of lay Catholics. He said this tendency explained the continuing “lack of maturity and Christian freedom in a good part of the Latin American laity.”

Remedies for clericalism include increased “opportunities for laypeople to participate in pastoral consultation, organization and planning,” the pope said, as well as an appreciation of traditions of popular piety.

NEXT: Youths speak of what they’re searching for on sands of Rio