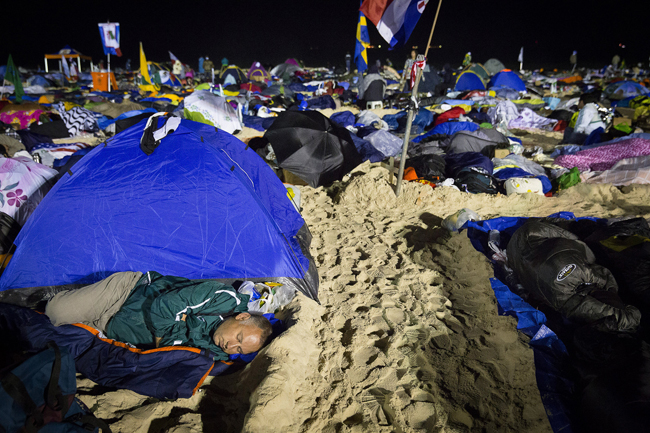 RIO DE JANEIRO (CNS) — The mayor of Rio de Janeiro told pilgrims they could go home after the July 27 World Youth Day vigil and return for the closing Mass the next morning. Not many listened.

After Pope Francis’ address to the youth at the start of the vigil, many pilgrims left, but many other hundreds of thousands remained on the sand of Copacabana beach and its nearby streets and parks.

Approximately 250 pilgrims from the Washington, Arlington and Philadelphia dioceses were looking for a safe place to spend the night when Catholic News Service met up with them on a side street in the Copacabana neighborhood at 10 p.m. Although the pope’s address had been over for hours and the Neocatechumenal Way group had just walked almost six miles, they were still in high spirits, singing as they slowly moved along.

“The beach is not possible, we have too many kids and there is not enough space. It’s packed,” said one of the group’s organizers, Marcio Enriquez of the Archdiocese of Washington.

11:15 p.m. — The group decided to camp inside the fences of a square overlooking Our Lady of Copacabana Church. The group split to set up camp on both sides of the square.

“Rio was the perfect place to hold World Youth Day. As you come from the airport, you see all the favelas and you imagine their reality and then you think about your reality,” said Kevin Ruano, 17, from St. Michael the Archangel Parish in Silver Spring, Md. He said his first World Youth Day “has been a journey. Sometimes it has been hard to follow.”

Ruano said everyone is suffering one way or another and people just have to find their way.

“I came here because I have doubts,” he said, not wanting to elaborate. “I have come here searching for a sign from God that he loves me.”

Nearby, four young men were getting ready to play cards. The girls, a little farther off, were already inside their sleeping bags. Across the square, another group of pilgrims sang loudly.

Anita Shagnea, a chaperone from St. Bernadette Parish in Silver Spring, said the group had spent time staying with families in Brasilia, the trip’s highlight.

“Some were rich, others were poor, but all were very welcoming,” she said.

Suddenly there was talk of rats below the big tree where many of the pilgrims decided to camp. Chaperones discussed other alternatives, but some of the girls already were asleep under the tree.

One not likely to fall asleep so soon was Catherine Lavallee, 17, a student at Georgetown Visitation Preparatory School in Washington and a member of St. Bernadette Parish. She said she came to World Youth Day searching for signs. Her friends, she said, continuously search for happiness, and that often depresses her.

“They say they are unhappy but don’t do anything to get out of the situation. Although we go to a Catholic school, they haven’t tried religion,” she said.

“I have found at the World Youth Day an outpouring of God’s love,” she added. Although she said she still had a lot of questions about the future, “here I know I will find the toolkit to find my answers.”

1:30 a.m. — Shagnea was looking for a bathroom for some of the girls. She said bathrooms are a luxury during these vigils. As she contemplated taking them across the street to the church, a truck pulled up with three brand new, not-yet-used portable bathrooms. As city workers placed them outside the square, the girls started to run.

“Ok, kids,” Enriquez said, “if you want to go, this is the time. I can’t tell you when we’ll have the opportunity to use a clean bathroom without waiting in line again.”

2 a.m. — CNS reporter had phone battery problems and headed back to the hotel for a few hours. The singing had stopped, and most of the young people in the group were asleep. Chaperones said they would take turns keeping watch until the morning hours, when they would head toward the beach for Pope Francis’ final Mass in Copacabana.

“We come to these events so that kids can appreciate their lives. I see a huge difference before and after these pilgrimages. We want them to open their lives to the will of God,” Shagnea said.

4:15 a.m. — CNS returned to find part of the group had gone, Ruano and Lavallee among them. Perhaps they decided to move early and get closer to the main stage, where Pope Francis celebrated Mass.

Finding the same pilgrims among the 3 million people on the beach proved to be an impossible task.

NEXT: In Brazil, Pope Francis shows power of his simple actions, frank words