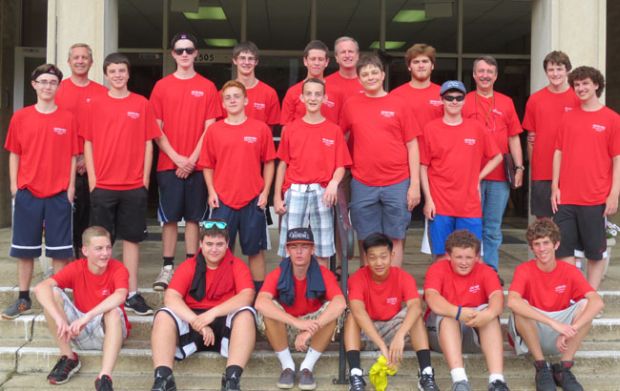 Eighteen Devon Prep students and three chaperones recently traveled to Oil City, Pa., as part of a summer mission trip organized through Catholic Heart Workcamps. The group spent one week helping to work the homes of people who are limited or unable to provide for themselves.

The hot summer didn’t stop Devon Prep students from helping those in need. This summer 18 upper school students and three chaperones took time from their vacations to participate in a mission trip to Oil City, Pa., in the western part of the state.

There they spent a week sleeping in a local Catholic school and working on the homes of people in need.

Once a thriving, vibrant town, Oil City now suffers from the lack of jobs that relied almost exclusively on the oil industry that has literally dried up. Many of the town’s large beautiful homes are now falling into disrepair and are often occupied by widows or families who have no steady source of income other than government assistance.

During their week in Oil City the Devon Prep students slept in classrooms in Venango Catholic High School, awoke at 6:15 a.m., ate breakfast, attended morning Mass and then went off to three separate worksites. 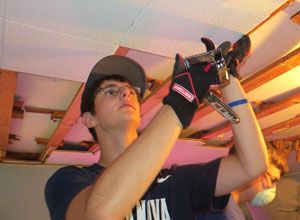 Devon Prep junior Andrew Dawson of Audubon installs a ceiling on a house in Oil City as part of the school’s recent summer mission trip.

Working through Catholic Heart Workcamp, Devon Prep’s group spent the week helping people who are limited or unable to provide for themselves. The work involved interior and exterior painting, scraping, cleaning, spackling, caulking, cutting wood, laying down a linoleum floor, replacing a kitchen counter-top, and more.

“The Devon students worked hard and really made a positive and lasting impression on the people they served,” said Joe Lewis, a religion teacher at Devon Prep and organizer of the trip. “The boys enjoyed the opportunity to interact with the people we helped.

“We discovered they are a tremendously nice and proud people who very much appreciated what we were doing for them. Some of them went out of their way to prepare lunch for our guys and to make them a part of their family.”

In addition to working, the young men had the opportunity to participate in Catholic Heart Workcamp activities which included fellowship, worship and music. They also met other participants who came from Canada, Arizona, Michigan, Florida, Ohio and other places around the country.

Devon Prep senior Patrick Shields of Norristown enjoyed both the work and the camaraderie that went with it. 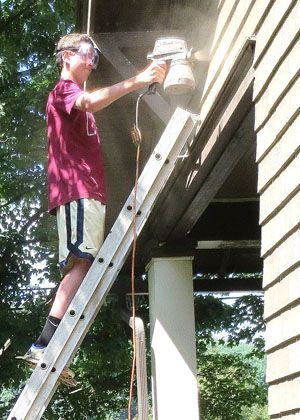 Devon Prep junior Andrew Walhiem of Malvern paints the exterior of a home in Oil City.

“My group worked on the house of an older woman whose husband had recently passed away,” he said. “We mostly did inside painting, a bit of outside work, and we put down some linoleum on the second floor. It was nice to learn some things about painting while helping out someone less fortunate than us.

“I’ve become closer to my classmates who went on the trip, and I’ve grown stronger in my faith. I enjoyed every part of the trip and feel refreshed by the whole experience.”

Catholic Heart Workcamp is a non-profit organization established to offer quality service projects and evangelical programs for Catholic young people and their leaders. Their two-fold mission is to share the love of Jesus by serving the neglected, brokenhearted and marginalized; and to empower participants to live as disciples of Christ through serving others.

Devon Prep is a private Catholic college preparatory school for young men in grades six through 12 conducted by the Piarist Fathers and located on Philadelphia’s Main Line.