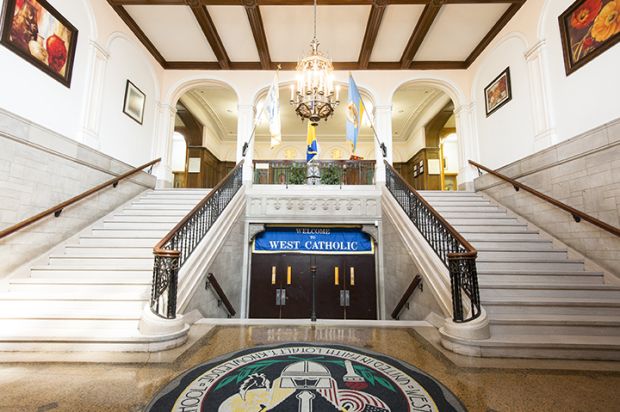 That’s quite a mouthful, and it isn’t a matter of moving further east to Penn and Drexel. It’s just that University City keeps getting bigger and bigger, and now West’s campus at 45th and Chestnut streets lies well within the community’s boundaries.

In January 2012 nobody thought West would still be around. The Blue Ribbon Commission on Catholic Education had only weeks earlier recommended six high schools to close. Literally no one thought West could survive, because of all the high schools it was at the very bottom in enrollment.

Then funny things happened. First of all there are quite a few people, alumni mostly, who still believe “West is Best.” The drive to save West was kick-started by an anonymous donor who gave $1 million to keep the school open with very specific direction on how this should be spent, and it worked.

Actually West was the catalyst for all the schools at risk to come up with models to remain viable, and in the end no high school closed that year.

Last year’s enrollment was 241 students and this year it is expected to be 320-330, according to Christian Brother Richard Kestler, the school’s president. Last year West enrolled 51 freshmen; this year it will be 130-140. “We are the fastest growing high school in the archdiocese,” Brother Richard said. 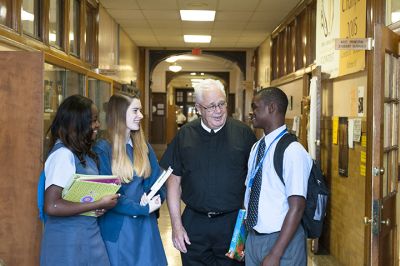 Recruiting is a priority, and West has two full-time recruiters who work to get the numbers up by visiting various groups and even the homes of prospective students.

The new name of the school drops the word “Philadelphia.” That reflects its recruiting goal, which targets a student body not only in West Philadelphia but also in western urbanized areas of Delaware and Montgomery counties, according to Brother Richard. In a way this is a throwback to the beginnings of West at a time when there were no archdiocesan Catholic high schools in the western suburbs.

That $1 million donation was critical but it only goes so far. West has beefed up its Advancement Office from one person to four and the results are showing. Annual alumni giving in the most recent appeal was $990,000, more than double the previous campaign, and another generous donor is giving $500,000 as a planned gift.

“Preparatory” was added to the name to signify West fully intends to prepare its students for their future, whether that is through a college program or another.

A glance through the school catalog shows a respectable academic program including honors courses and advanced placement courses, plus two modern languages — French and Spanish are offered.

There are very strong art and music programs, with chorus as a credit course not a club, plus technological communications courses.

The food preparation and culinary arts courses, not to be confused with the old home economics course offered by high schools, specifically point the student toward  a career in the food industry. “We are hoping to add a hospitality management course,” Brother Richard said.

Partly because of its location in the academic heart of the city, West has partnership programs or cooperative programs with Drexel, Penn, St. Joseph’s and the University of the Sciences. Student volunteers come from Immaculata, Villanova, St. Joseph’s and La Salle.

Ethnically, the student body represents the neighborhoods the school serves. Brother Richard estimates 80 percent of the students are African American, 13 percent Hispanic and most of the rest other Caucasian nationalities.

Once just about 100 percent Roman Catholic, today, especially because of the largely African American makeup of the school, about 70 percent of the students are non-Catholic, Brother Richard estimates.

Nevertheless, Catholic theology is a required course throughout all four years and there is a High School RCIA program that attracts eight to 13 students a year, Brother Richard estimates.

The Catholic identity is fostered through a strong presence of religious men and women on the faculty and staff.

PREVIOUS: Five goes into one: Our Lady of Hope showing value of regional schools