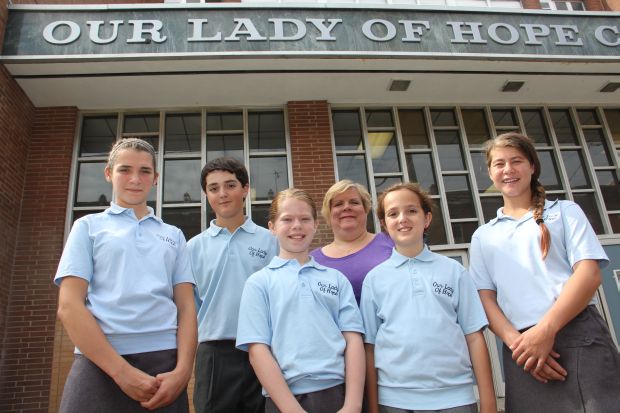 School mergers can be tricky. It can be touch and go, with perhaps many families taking the merger as their cue to leave the Catholics schools, or even move from the neighborhood.

In South Philadelphia, Our Lady of Hope Regional School, which opened last year primarily for children from Epiphany, Our Lady of Mount Carmel, Sacred Heart, St. Philip Neri and Stella Maris at the former Epiphany School, seems to have transitioned nicely.

“We will have approximately 390 students, grades K through eight, and we have 20 to 22 children to a classroom with two classes for every grade,” said Patricia Cody, principal at Our Lady of Hope, a position she held at the former Epiphany.

“We have a faculty 20 full time and five part time. The school is able to offer a foreign language, Spanish, throughout the grades; it has a state of the art science lab and has introduced the Lab Learning Program. It has a program for children with learning issues.”

Up through grade five the students follow the typical elementary school schedule, remaining in place for virtually the entire schedule.

Grades six through eight follow what Cody calls an Academy program. The students do have a home room but they cycle through six classrooms over the course of the day for specific subjects.

“It helps the children to acclimate better when they go to high school and to develop to the best of their ability,” Cody said. “The change was more positive than we anticipated.”

There is also a very strong list of extracurricular activities, too, the principal noted.  Among these are a newspaper, a writing club, liturgical club, technology club, film club, intramural sports and junior varsity sports.

Thanks to the Connelly Foundation, there is a very strong arts program that even includes dancing, Cody said.

Because Our Lady of Hope is no longer a parish school, it is very much on its own in matters of governance and finances.

Mike Gillespie, a school parent, is president of the Governance Board for the school. “We have challenges. We have to raise money to keep tuition low, but you won’t find a better opportunity,” he said. “I think everything is going well. Patty Cody is an awesome principal.”

Gillespie has three children in school — Madeline in grade six, Abigail in grade two and Grace in pre-K. The family lives in St. Philip Neri Parish, and before the consolidation their school would have been Sacred Heart.

Sacred Heart was the only school Abigail knew, her father noted, and “it was very sad to leave it and there was a lot of turmoil in the neighborhood,” Gillespie said. “Some families made other choices for their children’s school.”

With that said, Gillespie notes, “Regional schools are the up-and-coming model.”

Bailee Otto, who is going into grade eight, attended Our Lady of Mount Carmel through grade six. For her, last year’s transition was not difficult and she was a member of Student Council in grade seven.

“I feel it is great coming to a combined school with students from different neighborhoods,” she said. “It is getting me ready for high school and here we have better technology and a better science lab.”

“At first it was hard to get to know people but things kind of followed through, it took a couple of weeks or a month,” she said. “I think most of the students adjusted to it. I like the Science and Technology Lab; I think it is really cool.”