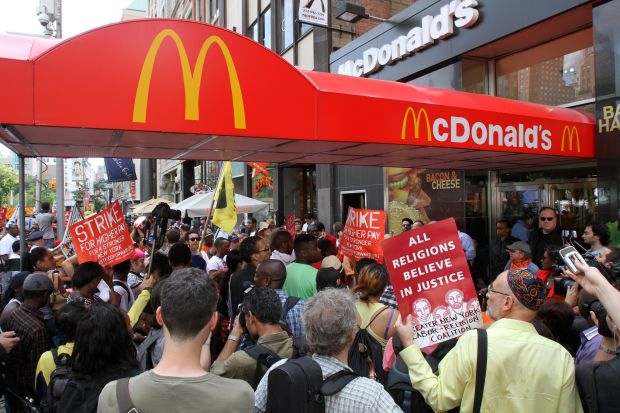 Fast-food workers and their supporters rally in front of a McDonald's restaurant in New York's Union Square as they demand higher wages July 29. (CNS photo/Gregory A. Shemitz)

WASHINGTON (CNS) — Seventy-five years after President Franklin D. Roosevelt signed into law a national minimum wage, many workers still struggle to support themselves and their families living at or slightly above that pay.

“Jobs that are paid minimum wage take a lot of physical effort. You’re on your feet; you’re moving and working quickly. Imagine working that hard and not feeling like you can provide for yourself and your family — it is incredibly demoralizing,” said Judy Conti, an activist with National Employment Law Project.

The current minimum wage is $7.25 an hour; had the minimum wage kept pace with inflation it would be at $10.74 per hour. Additionally, minimum wage for tipped workers hasn’t been raised in more than 20 years and remains at $2.13 an hour.

Chanting “we can’t survive on 7.25,” many fast-food workers have organized walkouts in cities like Chicago, Milwaukee and New York City. The movement in Chicago called “Fight for 15” held protests Aug. 1 and has encouraged others in the city and around America to fight for living wages.

“God bless these people,” said Conti. “They’ve got nothing to lose.” While she believes the federal minimum wage should be increased, she also champions the workers for dealing with the problem directly.

To her, raising low wages makes sense economically: “The more people you squeeze out of the middle class, the more no one has the money to buy your products. Good wages is a virtuous cycle; it fuels an economy that works.”

Kali Radke, 31, works part time at $8.25 an hour, a dollar above the federal minimum wage, while going to school for nursing. While she had been living in a shelter, she and her 9-year-old daughter now live in transitional housing in Fort Meade, Md. Because of the scarcity of full-time minimum wage jobs, many people she knows work multiple part-time jobs to support themselves. Even then, it’s easy to be let go if something like a child’s sickness prevents them from coming into work.

“It’s an employer’s market,” Radke told Catholic News Service in a telephone interview. Though she hopes to get a managerial position, and eventually a job in nursing, she realizes that not everyone has opportunities for a career change. “Some people can’t go to school, but if you’re willing to put in 40 hours a week, you should be able to afford a crappy apartment and it’s just not possible.”

Almost half of minimum wage workers, 47 percent, are full-time employees over the age of twenty. 24 percent are parents, and more than a third are minorities, according to the Economic Policy Institute, a think tank based in Washington.

With an increase in the minimum wage “things would still be tight, but at least I’d be able to put a roof over our heads,” said Radke.

Church teaching has long supported just wages and fair treatment of employees. For example, Pope Leo XIII issued his encyclical “Rerum Novarum” (1891) to address the difficulties faced by the working class in the wake of the Industrial Revolution. “Wages ought not to be insufficient to support a frugal and well-behaved wage-earner,” he wrote.

Catholics also have been involved in furthering a just wage in America. “Msgr. John A. Ryan wrote one of the first pieces on (state minimum wage law),” said Michael Naughton from the John A. Ryan Institute for Catholic Social Thought, part of the University of St. Thomas in St. Paul, Minn. “There was a grave concern for people to be able to achieve their needs with the wages that they make.”

Brian Engelland, an economics professor at The Catholic University of America, fears that increasing the federal minimum wage may not be beneficial to the overall economy: “It’s rough and inexact when it’s done on a national basis because there such a great difference between costs of living between, say, Mississippi and D.C. Fair wages should be done more on a regional basis.”

However, he believes that local government as well as employees, employers, consumers and investors should actively promote and bargain for just wages that are realistic for their individual companies.

“Because of the way we were created, we like to work and we’ll work whether we’re paid or not,” he said. “Consequently, humans do not do a good job in negotiations. We’ve gotta tip the scales toward human dignity so that the individual worker doesn’t get the short end of the stick.”

“It wouldn’t be a bad idea” to have minimum wage laws legislated at a local level, “but the federal minimum should keep pace,” said Charlie Clark from St. John’s University in the New York borough of Queens.

The majority of minimum wage employers, corporations like Wal-Mart, Target and McDonald’s, can afford a wage hike, according to the National Employment Law Project. Two-thirds of those employing minimum wage workers are not mom-and-pop stores, but large corporations with more than 100 employees. Seventy-eight percent have been profitable every year for the past three years, and 63 percent of these companies are earning higher profits now than before the recession. Much of that money is benefiting the higher-ups.

“If you look at the data of labor productivity until the mid-1970s, wages went up with productivity,” said Clark. “Productivity increases now go to owners.”

Still, debate on a higher minimum wage based on differing economic theories has prevented passage of any measure to raise it. Clark told CNS that for many years economists believed that raising the minimum wage would raise unemployment, “but then they started to empirically test it and there’s no evidence that unemployment goes up. Now economists are split about 50/50.”

Naughton believes that a just wage is part of right relationship between employees and employers. “The role of virtue should inform these wage relationships from a scriptural, Catholic perspective,” he said. “Are there ways I can dignify the work? How can you promote the growth of your co-worker versus seeing an employee as an eight-hour unit?”

Conti believes she was called to help people to support themselves. “I was raised in all of the traditions of Catholic social justice, not just charity, not just handouts but real opportunities for people to better themselves.”