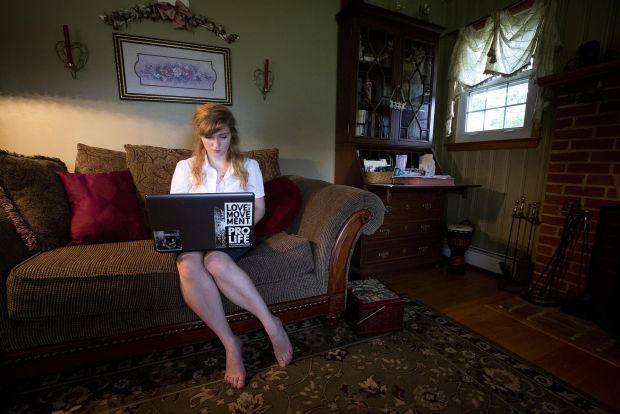 Emily Rolla, a 22-year-old 2013 graduate of the Franciscan University of Steubenville in Ohio, works on her laptop Aug. 8 at her home in Westminster, Md. (CNS photo/Tyler Orsburn)

WASHINGTON (CNS) — Emily Rolla, a 22-year-old graduate of the Franciscan University of Steubenville in Ohio, recently accepted a retail job at Target after trying unsuccessfully since December to get a job in her field of study.

A double major in communication arts and German, Rolla has applied for jobs ranging from public relations, social media management and writing to teaching German.

“I have had multiple second interviews but have always been passed over due to ‘lack of experience,'” she told Catholic News Service.

Rolla is among the group of Americans ages 18 to 31 who are struggling to obtain jobs more than any other age group.

Chuck Underwood, founder and principal of management at a consulting firm called the Generational Imperative Inc., said that for this “millennial generation,” the unemployment rate reached 18 percent during the height of the “Great Recession,” as compared to 9 percent for the nation as a whole. The recession lasted from December 2007 to about June 2009.

“Many older, and more experienced, Gen-Xers and baby boomers lost their jobs and took lower-position, lower-paying jobs that normally would have gone to entry-level millennials,” Underwood told CNS in a statement. “Employers, understandably, welcomed the Xers and boomers because their businesses were also fighting for their lives during the recession.”

According to a Pew Research Center analysis of U.S. Census Bureau data, in 2012, 36 percent of the millennial generation were living in their parents’ home. This is the highest number in at least four decades, the study shows. In 2012, 63 percent of 18- to 31-year-olds had jobs, down from the 70 percent of their counterparts who had jobs in 2007.

Demos, a New York-based public policy and advocacy group found that that the U.S. economy will have to create more than 4 million jobs before young adults will be employed at levels similar to those before the recession.

According to Underwood, millennials have gotten off to a very shaky start with employers and are the worst job-hopping generation in U.S. history. He said that the average 26-year-old millennial has already had seven employers.

“Not only that, but employers consistently say that millennials enter their workforces with flawed senses of entitlement, unrealistic expectations about pay, position, and promotions, and demand flex time and instant vacation time, show up late for work, refuse to take ownership of their assignment and career, and don’t demonstrate the necessary independence and self-reliance that prior generations did demonstrate at that same age,” he said.

“After multiple years of a tough job market, the most recent graduating college classes may find that they are in competition for the same position with graduates from previous years,” said Anthony Chiappetta, director of the Office of Career Services at The Catholic University of America.

Stewart McHie, director of Catholic University’s master of science in business analysis program, said that planning ahead and acquiring business skills such as strong writing and public speaking capabilities is key for the millennial generation in today’s competitive job market.

“I don’t think students understand that they have to start preparing to go to work when they reach the college campus as a freshman,” McHie told CNS.

He also mentioned the importance of students being prepared for job interviews, something he said is often neglected.

“Dress, eye contact, being on time, knowledge of the company and interviewer, passion about the job, turning off cell phone,” McHie said. “A good interview takes significant thought and preparation.”

Laura Caporaletti, 21, will be in the Catholic University’s master’s program in business analysis next year. She believes the best way to land a job is through obtaining connections and networking. Caporaletti, who works at a law firm as a legal assistant, said her employment was based solely on the fact that her aunt is one of the attorneys at the firm.

“I think it’s really difficult to find a job these days without some type of personal connection,” Caporaletti said.

She also said part of the employment struggle for millennials could be based on the fact that so many qualified people are applying for so few available positions.

“Neither one of my parents went to college, but now it’s the norm,” Caporaletti said. “We’re all intelligent, driven and ambitious, and it’s hard because a lot of (millennials) look the same on paper.”

Some economists argue that minimum wage hikes play a major role in the shortage of job positions because they cause businesses to hire fewer workers or reduce the number of current employees.

Worse off than millennials in general are black or Latino young adults, a phenomenon connected by some economists, such as Milton Friedman, to minimum wage.

Friedman, recipient of the 1976 Nobel Memorial Prize in Economic Sciences, argued that “the minimum wage law is most properly described as a law saying that employers must discriminate against workers who have low skills.” Numbers released by the Bureau of Labor Statistics showed that black young adults ages 16 to 24 had an unemployment rate of 28.2 percent in May, up from 24.9 percent in April.

He explained that recent statistics show unemployment rates for those with a high school education twice as high than those with a college education. He also attributed unemployment to a lack in demand and spending in today’s economy.

With high rates of the nation’s minority youth unemployed, U.S. Sen. Kirsten Gillibrand, D-N.Y., and Congressman Chaka Fattah, D-Pa., announced legislation in April aimed at increasing employment among at-risk youth. Called the Urban Jobs Act of 2013, the measure would provide federal funding to nonprofit organizations to carry out programming to prepare youth for employment. The bill was assigned to a congressional committee March 21 but did not make it out of committee.

After months of looking, Nicole Shields, a 24-year-old African-American, who lives in Atlanta, just landed a job in her field — communications — at SunTrust Banks headquarters in downtown Atlanta. She’d been hunting for a job since before she graduated May 11 from Georgia State University. Now she is the company’s communications specialist for technology and operations.

“I knew initially new the job search would be difficult with so many recent graduates, the unemployment rate pretty high,” she told CNS in a telephone interview. “I started applying for jobs in late March because I knew how difficult it would be. … It wasn’t until June everything started to pick up.”

Like Caporaletti, Shields stressed the need to make connections and network. She attended numerous networking opportunities while she was looking for work — and she entered the job market with several internships under her belt, including at CNN and CBS Radio. She also connected with those who had graduated a year before her, asking them for “tips and pointers” for finding a job.

Shields said she feels Congress and companies might have some role in creating jobs, but while it “may sound cliche,” she added, as “a citizen of the United States, you have to have initiative, determination. … You can’t just expect something.”