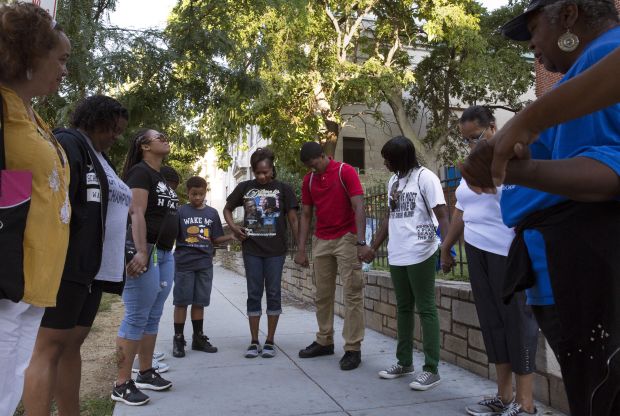 WASHINGTON (CNS) — The presence of Catholic priests and religious was unmistakable at the first March on Washington in 1963; their clerical collars and full habits with wimples stood out even among the black-and-white images of the day.

Clergy and religious weren’t as visible at the first of two major anniversary events in 2013, but African American Catholics were in attendance, just as they were a half-century earlier. There was, they said in interviews with Catholic News Service, no place else they could imagine being on Aug. 24.

“I never thought about not being here,” declared Donna Pasteur, a member of St. Augustine Parish in Washington, as she sat with a delegation from her parish on the south side of the Reflecting Pool in shade on a sunny summer day and close to a speaker tower.

Pasteur said she had also been at 25th- and 40th-anniversary commemorations of the March on Washington.

The issues that brought about the first march, in her view, stubbornly remain today.

“I see the inequality in jobs and justice,” Pasteur told CNS. “We just have too many people out of work. We don’t have that many good jobs.”

Even so, the situation is improving compared to two generations ago, she said. “You pray in different ways. You pray with your own presence, too for jobs and justice,” repeating the theme of the 1963 march. 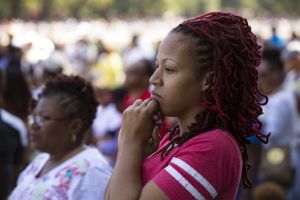 Che Young of Baltimore, Md., listens to a speaker during the National Action to Realize the Dream in Washington Aug. 24. (CNS photo/Nancy Phelan Wiechec)

Pasteur’s friend — and St. Augustine School classmate — Shirley Satterwhite, started making plans to come to the Aug. 24 march once she returned from a funeral in South Carolina.

“I sum it up as justice,” Satterwhite said. “I see progress in the schools, the public schools. I see some changes in the police force,” she added, with Pasteur interjecting, “Some breakthroughs.” Then Satterwhite continued, “Better control of crime.”

“We’ve got a president in the White House who gives voice to all Americans. It gives us a chance to show solidarity,” Pasteur continued. Satterwhite lauded President Barack Obama, the nation’s first black president, for his efforts at ending war. “He’s bringing some veterans home,” she said, “and taken better care of the veterans.”

Charlene Howard, a member of Washington’s St. Teresa of Avila Parish, was one of group of five at the march, including her son, her godson, and a teenage friend.

A teacher and counselor at Archbishop Carroll High School in Washington, Howard said she would be able to apply the principles behind the march in her lessons.

Howard said her mind was made up to go to the Aug. 24 march when she couldn’t attend any rallies in support of Trayvon Martin, the black Florida teen who was shot to death in Sanford, Fla., last year, and whose killer was acquitted in July by a jury that was given instructions based on Florida’s “stand your ground” law.

She recalled her father’s role 50 years ago.

“My dad was here for the first march. He was a marshal, helping keep order,” Howard said. “I feel a responsibility to be here because of the issues that were behind the march. Those issues are the same today.”

Howard said she liked “that I can be a part of history. How many chances do you have to be part of history? I wouldn’t want to say I was too busy to go. That wouldn’t have set a good example for my son.”