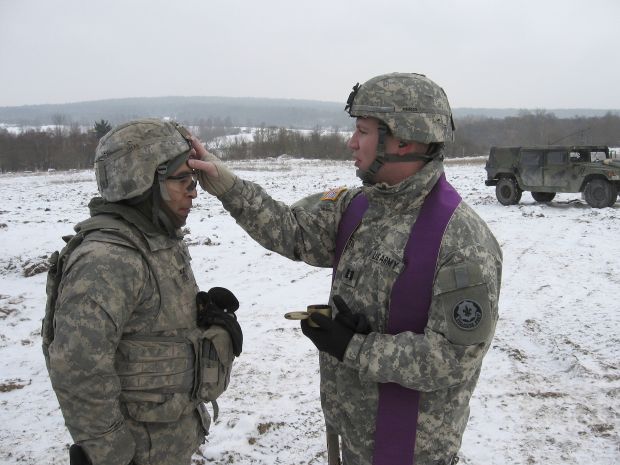 ALLENTOWN, Pa. (CNS) — After more than a year of preparation, Father Christopher Butera has made his way to Afghanistan, serving as chaplain to an Army unit helping train Afghan soldiers as the U.S. presence in the mountainous country winds down.

A priest of the Diocese of Allentown, Father Butera began his deployment in mid-August. It is his first assignment to Afghanistan.

“As an Army chaplain, my core mission is three-fold: nurture the living, care for the wounded and honor the dead,” said Father Butera, son of Kathleen (Lynch) and retired Lt. Col. Ralph Butera of Pottsville, Pa.

Ordained in 2007, Father Butera is in the Army Chaplain Corps, holding the rank of captain and senior priest for the U.S. Army Garrison Grafenwoehr, headquartered in what is known as Rose Barracks in Vilseck, Germany.

He has been on active duty for three years since leaving his diocesan assignment at St. Thomas More Parish in Allentown. He also served at the Army’s Aviation Center of Excellence at Fort Rucker, Ala., where he was the warrant officer career college chaplain and senior priest.

It took Father Butera 14 months to prepare for duty in Afghanistan.

“Our overall strategic mission is to advise and assist the Afghanistan military in assuming the regular and day-to-day military operations,” Father Butera said.

“Although we are transitioning in this way, the region is becoming slightly more dangerous as attacks on U.S. forces have spiked,” he said. “Within this mission, my mission as a chaplain never changes but adapts to the operation, terrain and logistics of the situation we are involved in. So I basically always provide religious support and advise the commander.

In his role, Father Butera also is key resource for the Army personnel with whom he works, serving as an expert on religion, morality, ethics and religion-related issues.

“This is very important in our current operations and has been for the past decade as our operations in the Middle East involve interaction, cooperation with our allies and understanding our enemies, who both are very much religious, primarily Islamic,” Father Butera said.

“A chaplain in the Army also has absolute confidentiality, which for all intents and purposes is equivalent to the sacramental seal of confession.”

His work has earned him the Meritorious Service Medal.

Because of his position, Father Butera is not allowed under the Geneva Conventions to carry a weapon. Instead, he is assigned an assistant whose primary job is to protect and guard him.

“As we will be travelling a lot in Afghanistan, this will be a very important part of his job, especially since Christian chaplains in Afghanistan have monetary prizes on our heads from our enemies,” Father Butera said.

As a unit chaplain, Father Butera responds to all emergencies or critical incidents to provide care for the soldiers and their families and to the unit as a whole as needed. He must be available around the clock seven days a week, answering calls for official or private needs.

As the senior Catholic priest for the garrison, Father Butera responsibilities are like those of a parish priest: administering the sacraments, leading prayer and Bible study, celebrating Mass and conducting retreats.

“With all the different aspects of being a chaplain in the U.S. military, from providing religious support to being a staff officer, I always remind myself why I am a priest who serves in the military, and that is simply to try to bridge that gap between man and God where one’s mortality and thus one’s judgment before God is an aspect of daily life,” he said..

“I want to be able to provide the sacraments, especially the Eucharist and confession, to those who literally put their lives on the line to protect our freedoms, it’s the least I can do.

“It is a great privilege to serve those who serve our country. Prayers for me and my soldiers are most welcome, as God’s grace provides all the success not only with what I do, but with my soldiers as well.”

Father Butera remains a member of the clergy of Diocese of Allentown, however, while on active duty he also falls under the auspices of the Archdiocese for the Military Services.

Quigley is on the staff of The A.D. Times, newspaper of the Diocese of Allentown, Pa.

PREVIOUS: Black Catholics felt the need to be at March on Washington anniversary

NEXT: St. John’s U probe reveals ‘errors in judgment’ but no crime